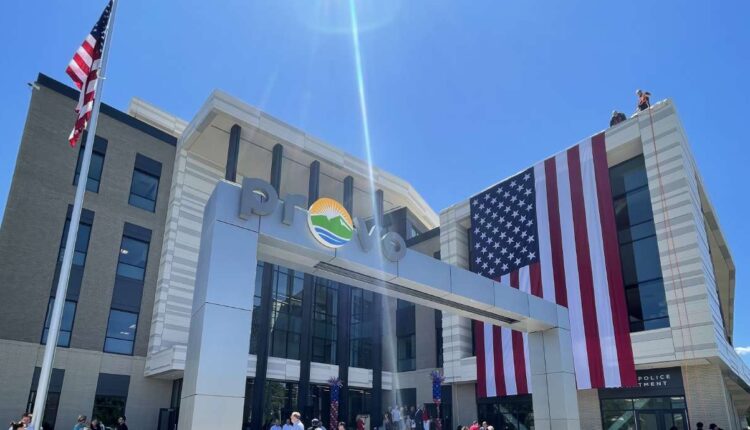 As several dozen people gathered in front of the modern building, which boasts five stories and 204,000 square feet at 445 W. Center Street, Mayor Michelle Kaufusi emphasized the difficulty she faced when deciding whether to seek a new building to improve the city’s public safety a few years ago, despite the possibility it would be “political suicide.”

“Making the safe decision doesn’t mean it’s the easy decision, because we are trusted as stewards of the taxpayer dollar. And it remains weighty. That responsibility is not taken lightly,” Kaufusi said.

Provo residents in 2018 narrowly approved a $69 million bond to replace the previous city hall, police station and fire station 2. As part of the bond, the average Provo homeowner would pay an extra $10 per month in new taxes for the next 20 years, city ​​leaders said at the time.

Provo in 2018 needed a permanent emergency operations center, which at the time was operating part-time out of the power building, Fire Chief James Miguel said.

“We knew that the answer was virtually impossible, but there was a great deal of courage to just go out and put that question in front of our residents and see if they could support us in wanting to provide them the very best,” Miguel said .

Kaufusi said the building is designed as an “essential facility” designed for use during natural crises or disasters.

“I think that most people don’t know the amount of planning that takes place to ensure that when something does go wrong, we have the ability to handle that,” Miguel said, adding that the new emergency operations center will be a “blessing ” in that regard.

Despite the pandemic and inflation that has affected building materials, city leaders noted the building was completed within the planned two years, and within budget.

The building is also designed to allow officers to work through earthquakes, said retired Police Chief Rich Ferguson. It has space for regional training, meaning they won’t always need to travel to other cities, and it has four kennels for K-9 officers to stay instead of remaining in officers’ vehicles when they’re at the headquarters.

“By working together, we made Provo safer for generations to come,” Kaufusi said.

City officials noted the building was constructed to last between 75 and 100 years. It was designed to have zero net energy usage, meaning it creates as much energy as it consumes.

Ferguson said the building “stands as a pillar” to police officers, showing that the community respects and values ​​them.

“There will be chiefs of police who will occupy this building who are in grade school today, or maybe not even born. It will be a new era for the Provo Police Department, and it will serve the city for longer than all of you here ,” he said, thanking residents “from the bottom of my heart.”

In the new building, the emergency operations center is located between the police, fire and legal departments. The building also includes space for partners during crises, including the Red Cross, Dominion Energy, Brigham Young University and other organizations, leaders noted.

The previous Provo city building was erected in 1972, when the city had 45,000 residents. City leaders said it was unable to withstand a moderate earthquake, and it was too small to serve the growing population.

“Provo City Hall was designed as an ‘essential facility,’ meaning it must remain in continuous use, particularly in response to a natural disaster,” project director Scott Henderson said in a statement. “To meet these stringent requirements, it was designed by the highest risk category prescribed by the building code. In short, when or if a disaster strikes, we can remain operational for our citizens.”