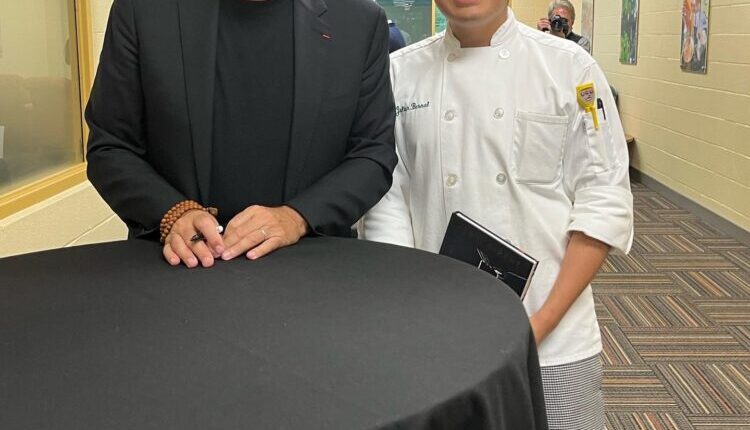 Julian Bernal, right, poses for a photo with acclaimed chef Éric Ripert. Bernal is a Provo resident studying at the Culinary Institute of America in New York.

Julian Bernal, left, smiles while posing for a photo with a friend and co-worker. Bernal is a Provo resident studying at the Culinary Institute of America in New York.

Julian Bernal, right, poses for a photo with acclaimed chef Éric Ripert. Bernal is a Provo resident studying at the Culinary Institute of America in New York.

Julian Bernal, left, smiles while posing for a photo with a friend and co-worker. Bernal is a Provo resident studying at the Culinary Institute of America in New York.

Add one pinch of spite, just a sprinkle of nonchalance, and one hefty scoop of talent. Mix them all together and you get Julian Bernal, an 18-year-old from Provo recently named a James Beard Foundation National Scholar and scholarship recipient. He is one of 12 honorees for the 2022-2023 year, representing the Mountain region, and will receive $20,000 to go toward his schooling.

Bernal is a sophomore at the Culinary Institute of America at Hyde Park, New York, after graduating from Provo High School, where he ran cross country. It was there he also collected one of the first chips on his shoulder.

“I participated in a pastry and baking competition also, got second place by, like, 2 points. So like, whatever,” Bernal recounted. Beyond that competition, Bernal’s passion for cooking class was how he decided to attend culinary school.

There was another chip on his shoulder. “That just, like, never sat right with me. I was like, I don’t want to go to a culinary school I wanted to go to one of the best ones,” he said. After researching on his own, Bernal found the Culinary Institute of America. Even though it appeared on plenty of rankings, it wasn’t until after watching a YouTube tour of the school that Bernal made up his mind. He was heading east — maybe.

While working at BYU, Bernal remembers looking at his phone and seeing the acceptance email — still not enough to make the New York expedition a reality in his mind. Once Bernal told his family he was selected for the school, it became real.

As for the scholarship, Bernal didn’t apply with any expectation of success. In fact, after applying for plenty of others and continuously writing essays, he was beat. Bernal wasn’t going to apply for any more until his roommate refused to say what scholarship he was applying for out of fear Bernal would throw his name into the ring. “I got really, like, mad,” Bernal said.

Still, Bernal remembered his roommate applying for the James Beard Foundation scholarship before and figured it could be the target once again. While applying, he had the same feeling as applying for the Culinary Institute. Sure it would be cool, but what are the odds of actually getting it?

“I was like, ‘It’s not going to happen,’ but I applied for it anyways,” he said. “I actually forgot that I even applied for the scholarship and then, last semester, I was doing some homework — I was kind of stressed out because I had a lot of homework I had to do — and then I got an email that said I had been selected for it.”

Ever the pessimist, Bernal assumed the email was a scam — so much so he almost deleted the email without even opening it. Happily for him, Bernal checked the email, saw it was real and began “freaking out” in his dorm room.

Looking back, Bernal was grateful his roommate was cagey about the scholarship. Had he been direct, Bernal said, odds are he wouldn’t have even applied.

According to the foundation, the selection process is broad and all-encompassing, going beyond a person’s work in the kitchen. “This list of candidates is then passed on to a Scholarship Selection Committee, consisting of chefs and educators, who use a rigorous rubric and scoring system to determine the top choices. This rubric includes such criteria as education, work experience, volunteer and public service, recommendation letters, and personal statement. Once each committee member has completed their rubric, the group meets to review and choose the final candidates from the point-based short-list,” the foundation wrote in an email to the Daily Herald.

While a technical sophomore in school, summer semesters are “one of the main semesters,” leading to most students graduating in three years. Bernal is spending his fall as an intern in Florida, cooking at Trattoria al Forno on Walt Disney World’s BoardWalk.

Even getting to Florida was a memorable experience. Bernal flew from Provo back to New York in early September before driving down the Atlantic coast and finding a must-stop location.

“This one truck stop place, it was amazing. I’m gonna go back there when I drive back,” he laughed.

With only days of actual work under his belt at Disney’s Italian dining location, he expects to do a little bit of everything before the semester is done. Once he’s figured out the pizza station, Bernal said, they’ll shuffle him down to the grill, the sauté space, dessert station and anywhere else he can learn.

Still, the passion began almost 2,500 miles from his temporary kitchen.

It makes sense then that Bernal’s dream is to compete on “Top Chef” before turning 30. While winning would be the goal if he makes it there, Bernal right now just hopes to find his way onto the acclaimed cooking competition show.

Maybe one day he’d like to have his own restaurant too, but that’s further into the future, not what comes next.

“When I graduate, I want to, for the first couple of years, just go from restaurant to restaurant getting experience and learning,” he said.

8 places to view Utah’s colorful foliage this fall, as recommended by KSL.com readers