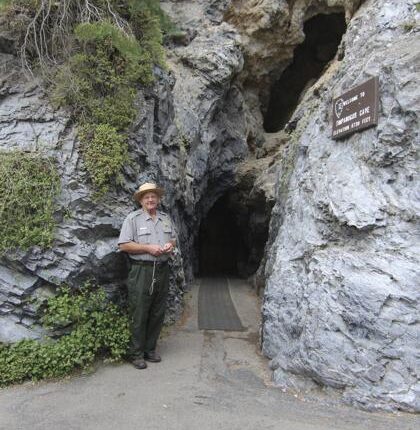 PROVO, Utah (AP) – If you’ve visited Timpanogos Cave National Monument for the past 53 years, you’ve likely come into contact with, learned from, and discovered his love for the caves with ranger Jay Allen. Allen retired this spring, having worked as a guide in the cave every summer since graduating from college.

“I started in 1968. I had just finished my pre-meditation program at BYU and got a job in the cave that summer and I enjoyed it. I decided that working in the park was much better than working in a doctor’s office or hospital, so I stayed there, ”Allen told the Daily Herald. “I was a guide through the caves. I liked being outside all day hiking up the cave trail. It was a good exercise and I enjoyed showing people from all over the world through the caves. “

When Allen got the job, he was called a cave guide. Later the guides were referred to as cave rangers. Allen eventually became a senior ranger in charge of tours and setting up tours at the top. Occasionally he would dress up and tell stories as the American Fork Canyon historical figure, George Tyng.

Allen said he wasn’t sure how many tours he gave, but it must be many thousands. “When I started we worked about 100 days, doing 100 hikes through the season to the cave. We walked about 10 miles every day. When you add that up, it was tens of thousands of miles of hiking and we did five or six tours a day, each of us. That’s a lot of cave tours, ”he said.

There are actually three different caves that tours are guided through including the Hansen Cave, the Middle Cave, and the Timpanogos Cave. “The caves are very unique, especially the helictites that the caves have and the various minerals that give the caves their color,” said Allen. “The other thing that people from all over the world loved is the actual hike to the caves on a paved trail to be on the mountainside and hike 3½ miles up and back.”

When Allen graduated from BYU and got his job in the cave, he realized he had to have something to do to support his habit of being a ranger. So he started teaching. Allen taught biology, zoology, botany, and human biology bioethics at American Fork High School for 46 years – a course he developed himself. Interestingly, the high school’s mascot – the caveman – pays homage to the Timpanogos Cave.

Allen was born and raised in American Fork. His father also worked as a cave guide in the 1940s. “I am connected to the cave through him. My father and mother lived in a house right where the maintenance yard is now. You lived there for a summer or two, ”Allen said. “It’s a connection that drew me there somewhere deep inside.”

Cami McKinney, Timpanogo’s Cave Program Manager, has worked with Allen since 1997. “He’s spent his summers in the cave since I started here and long before that. He trains every ranger in how to offer a meaningful and informative program and how visitors can get to know the cave and learn to love the cave life, ”she said. “You don’t just get a lecture or see pretty things. We take the remarkable nature of Timp Cave and make it personal and meaningful for everyone. “

McKinney said that in the few weeks the caves opened this year, visitors are already asking for all of them. “The cave is part of a lot of family traditions and people expect to see it. We have employees who really miss the things he does and the things he knows. It’s not replaceable, ”she said.

Now that Allen is retired, he could still be spotted in the caves. “There are days when I just like to go upstairs and sit down and talk to people,” he said. “I actually went there last week. I went up and went to the second bench and just watched the sun rise and talked to the morning hikers just to see some of my old friends who hike there regularly. “

“I couldn’t stop doing it. I loved being on top of the mountain. When my kids and grandchildren grew up, I took one of them with me to spend the day helping me with tours, ”Allen said. “When I started working in the caves, I went out after work and went fishing in the American Fork Canyon. I love the canyon, ”he said. “I would think: ‘It couldn’t be better.'”

Copyright 2021 The Associated Press. All rights reserved. This material may not be published, broadcast, rewritten, or redistributed in any way without permission.

Main attraction: How SJ-O’s Ty Pence has become a Division I recruit | Sports