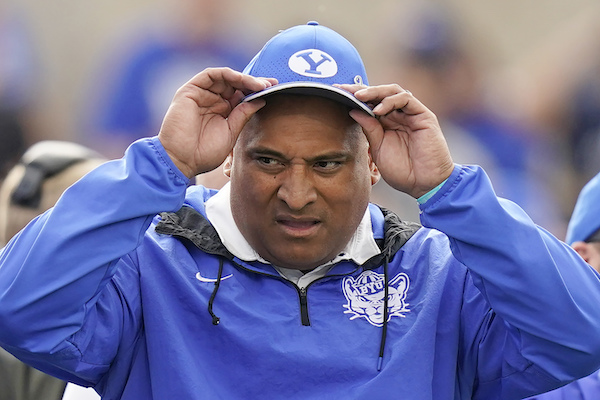 FAYETTEVILLE — University of Arkansas Coach Sam Pittman and his Brigham Young counterpart Kalani Sitake don’t know each other extremely well personally, but it’s clear they are fans of each other from opposite sides of the Rocky Mountains.

“I have high respect for him,” Pittman said of Sitake, a BYU alum (2000) who has a 52-31 record in his seventh season as coach. “In the AFCA, all the coaches are on Zoom, you know, and the things that he talks about when he speaks in the head coaches’ meeting, he’s very, very intelligent.

“From everything I see, he’s very, very positive, and obviously he has a love for BYU.”

Pittman, who is 15-14 in his third season with the Razorbacks, referenced what it meant for BYU to land offensive lineman Kingsley Suamataia from Oregon via the transfer portal.

“I know this: For him to get Kinglsey to come back from Oregon to BYU … I have high respect for Kingsley’s family, and they love him. I would think that’s enough endorsement there,” Pittman said. “I do believe…he’s a fine, fine man and a hell of a football coach.”

Pittman said he was recruiting Suamataia, a 6-6, 325-pounder and former 5-star recruit from Orem, Utah, when he was still at Georgia.

Sitake was equally complimentary of Pittman on Monday in his opening remarks.

“Sam Pittman, he’s one of the great ones, man,” Sitake said. “He’s a really good person. I know a lot of people that worked for him and worked with him. We have had some great exchanges.

“He gets it. He is one of the good guys in football and I am looking forward to this matchup with him.”

“Fortunately this week he hasn’t missed any reps,” Roderick said.

Both quarterbacks had health issues last week, with Arkansas junior KJ Jefferson sidelined following a head injury and Hall not at 100% with his throwing shoulder.

For those interested in comparing the career stats of former Arkansas safety and linebacker Tony Bua and linebacker Bumper Pool, who surpassed Bua last week to claim the school’s career tackles record, the numbers are quite similar.

Pool got an extra season, his fifth year, due to the NCAA’s covid-19 allowance, while Bua played four seasons from 2000-03.

Pool, who started only one game while posting 125 tackles in 2021, has reached 32 career starts compared to 40 for Bua.

Brigham Young has doubled the number of team captains as Arkansas, which sports quarterback KJ Jefferson and tackle Dalton Wagner on offense and linebacker Bumper Pool and safety Simeon Blair (in lieu of injured Jalen Catalon) on defense.

Provo, Utah, is approximately 4,551 feet above sea level, so the air will be thinner than the elevations the Razorbacks are used to, but not as high as Colorado Springs, Colo., where Arkansas traveled to and lost in 2018.

Arkansas Coach Sam Pittman said teams he has been with have traveled to higher elevations, but he didn’t make a big deal of it during the week of preparation.

“We’re going to hydrate as much as possible and we’re going to watch our kids that have sickle-cell [trait] closely,” Pittman said. “And after that, we’re just going to go play the game.”

Speaking on his radio show Wednesday, Pittman said he had been in Provo before during a recruiting trip and didn’t notice the altitude difference.

“Of course, I was just walking around buying a sandwich,” Pittman said, drawing laughter from the crowd at the Catfish Hole restaurant.

BYU nose guard Caden Haws, a first-team All-Arkansas Preps selection by the Arkansas Democrat-Gazette as a center at Pulaski Academy in 2015, said he got to know Razorbacks Coach Sam Pittman when he attended UA camps in the summer.

“I didn’t have an offer from Arkansas, but I went to camps there and talked to Coach Pittman pretty regularly, because I was recruited as an offensive lineman out of high school and he was the O-line coach at the time,” Hawks said.

“I think just in general offensive line coaches, they’re cerebral guys,” Haws said. “They’re smart guys, and I think that kind of coaching style is really good from a head coaching perspective. I also have the utmost respect for Coach Pittman. Really, really great man. You can tell he’s a total players’ coach, but he also demands your respect as well.

“I love what he’s done at Arkansas. I think that he’s definitely the right man for the job. That’s been evident since he’s been hired. I know everybody there loves Coach Pitt.”

Brigham Young had a home game with Tennessee under contract for the 2023 season-opener, but the Volunteers backed out of the deal last spring.

Tennessee officials instead arranged a neutral site game against Virginia at Nashville, Tenn., and paid the $2 million contract buyout to BYU.

The Cougars won the opening game of that series 29-26 in two overtimes at Tennessee’s Neyland Stadium at Knoxville, Tenn., on Sept. 7, 2019.

Brigham Young has a 4-6 record in 10 games against schools that were in the SEC at the time of the game.

The most frequent SEC opponent has been Mississippi State, against whom BYU has split four games.

The most travel heavy of those years came in 2017, when the Cougars covered more than 17,000 miles with trips to New Orleans, Starkville, Miss., Greenville, NC, Fresno, Calif., and Las Vegas.

During the 11-year span, the Cougars have played more than 70 teams from 36 states representing every FBS conference.

BYU’s record against Power 5 conference opponents is 24-29, including wins against a team from each of the five largest conferences: the Atlantic Coast Conference, Big Ten, Big 12, Pac-12 and SEC.

This season, the Cougars will play teams from five conferences, including teams from three Power 5 leagues in Arkansas (SEC), Oregon and Stanford (Pac-12) and Baylor (Big 12), as well as fellow independents Notre Dame and Liberty.

BYU is scheduled to join the Big 12 next summer along with Cincinnati and Houston.

Richard Davenport contributed to this report