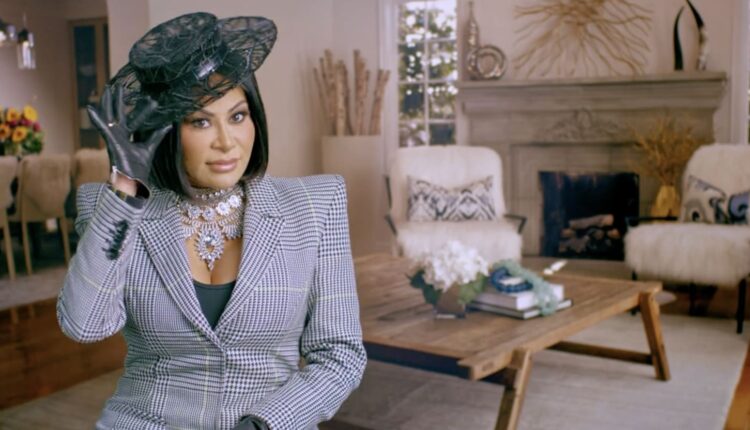 There have been innumerable hot mess confessional looks in the five-billion-year history of the Real Housewives franchise. Of course, early seasons were caught up in horrible mid-aughts fashion trends, like shiny satin blouses pulled from the clearance rack at Coldwater Creek and hyper-maximalist, jersey-all-the-way feathered shoulder pads.

But newer seasons aren’t immune from their own wackadoo wardrobe choices, either. Case in point: the most recent season of The Real Housewives of Beverly Hills. Across multiple episodes, we’ve watched confessionals cut back and forth between Erika Jayne’s challah bread ponytail and Diana Jenkins’ sexy baby look—maybe Taylor Swift got the inspiration for her “Anti-Hero” lyric from this botoxed, living Annabelle doll.

However, the styles worn during confessionals don’t normally reveal a Housewife’s inner machinations or turmoils. (Unless you count Ashley Darby’s helmet wig, which was plopped on when she simply couldn’t deal with her upkeep or grabby husband any longer.) That’s why it’s so surprising that the latest confessional look from Real Housewives of Salt Lake City’s Jen Shah tells us so much, without Shah herself ever saying a thing.

Shah has spent the first five episodes of RHOSLC’s new season maintaining her innocence in her federal fraud case, which feels more peculiar each week, knowing that Shah formally entered a guilty plea back in July. (The season filmed before that happened, of course.) Even stranger is the outfit she’s chosen to wear while trying to sell her virtue to the cameras. For her confessionals, Shah has donned black leather half-gloves, a double-breasted houndstooth jacket, a necklace as gargantuan as it is gaudy, and a hat that appears to be made out of spray-painted spiderwebs.

Let’s not dance around it: This outfit is incredible. The 47-degree tilt of the hat on her Ina Garten bob wig is really a marvel to behold, like the eighth wonder of the world. If I could get away with wearing this to work, I would do it in a heartbeat—damn the risk of anyone making fun of my tiny gloves! This is the kind of look that used to make children cower in fear back in the days of the Salem Witch Trials. Jen Shah is the ancestor of the witches you could not burn!

Suffice it to say, this is not a look that one should wear when wanting to look demure and innocent in the face of up to 50 years in prison. I don’t look at this outfit and see someone who’s not guilty. This look should be called “yassified Hamburgler” (or “Glamburgler;” McDonald’s, I am open to copyright negotiations). For god’s sake, it’s got an admission of guilt right there in the name!

This is the outfit of a notorious Batman villain, who hacks the mainframe of all of Gotham’s telecommunications systems to broadcast a special report. “You thought you could stop me, Batman?” she asks. “By dawn, all of my henchwomen will have stolen Gotham’s most precious jewels, and there’s nothing you can do about it!” Naturally, Batman tracks her down by following the scent of hospital smell.

Is donning one glorious outfit enough to forgive defrauding elderly people through telemarketing scams? Of course not. But for a minute, I did consider that maybe it should be. Jen Shah’s primary defense could be that she’s so perfectly cartoonish, she cannot be litigated in the same ways as you or I. What’s the use of throwing her in the clink when she can just pull out a comically large stick of red dynamite, clearly labeled “TNT,” and blow a hole in the joint? If this outfit proves anything, it’s that Jen Shah exists outside of the confines of our own corporeal limitations.

Jen Shah does not operate as we civilians do, and television will be at a major loss if she goes away. Who can forget when The Real Housewives of New Jersey paused while Teresa Giudice completed her year in prison? There’s some correlation between Giudice beginning her stint in January 2015—her beloved screeching still ringing in our ears—and Donald Trump somehow rising to the status of a legitimate political candidate in the same year.

What that correlation is, I have no idea. But there is no such thing as coincidence, and there are important elections coming up! Can’t Jen Shah have a house arrest bracelet and continue to film menacing dispatches from the Shah Chalet, dressed like she raided Cruella De Vil’s closet? We, as a public, deserve that. Where else are we going to get ideas for Halloween costumes?

KHN’s ‘What the Health?’: Voters Will Get Their Say on Multiple Health Issues

Stock Up on Gear at the Crossroads of the West Gun Show!