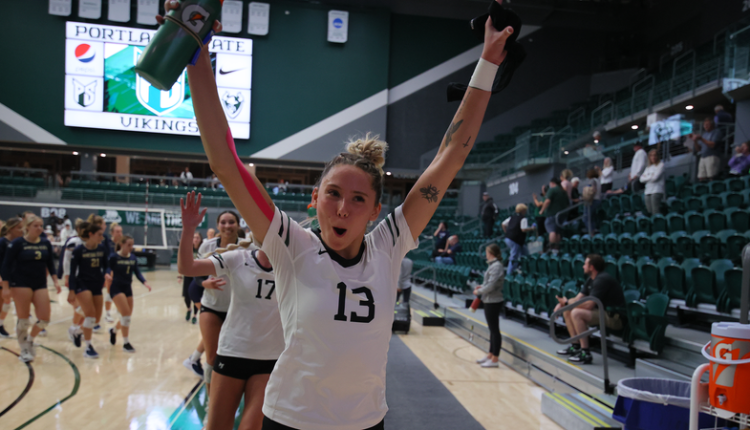 OGDEN, UT — The Portland State volleyball team came into Saturday night having not beaten Weber State at Swenson Gym in Ogden, Utah, since 2015. They had lost their last six road matches to the Wildcats, and had never taken more than a set off the Wildcats during that stretch.

This year’s Vikings showed no signs of being daunted by that history, as they punched the Wildcats in the mouth with a smoking first set, then handled the pressure well in the third to close out the Wildcats, 3-0 (25-15, 25 -18, 25-22). It’s the Vikings’ first 3-0 road sweep of the Wildcats since 2012, and gives the Vikings their third straight sweep over the past two weekends.

Most importantly, the sweep maintains the Vikings’ (12-7, 7-1 Big Sky) the Wildcats (11-7, 5-2 Big Sky) within the Big Sky standings. The Wildcats had a chance to leapfrog the Vikings in the standings with a win, but the Vikings snuffed out that possibility while securing the season series over the Wildcats after they also swept them at Viking Pavilion on Sept. 22.

It was a familiar force that got the Vikings their latest sweep Saturday. Weber State became the latest victim of a Viking offense that has now outhit 12 of its last 13 opponents. The Vikings topped the Wildcats, .353-to-.186, Saturday behind the three-headed monster that has fed the offense all season. Makayla Lewis, Sophia Meyers and Parker Webb all went into double figures for kills against the Wildcats, the third time that’s happened in Big Sky play, and the second time against the Wildcats.

“The big three allow us to work through our out-of-system situations. Madi [Friebel] has developed a strong trust in those three,” Portland State head coach Michael Seemann said about his offense.

Lewis led the way, just as she did in the Vikings’ first match against the Wildcats. Lewis recorded 17 kills on .351 hitting in the team’s home sweep of Weber State back on Sept. 22, and followed with 16 kills on .517 hitting Saturday. Lewis recorded only one attack error on her 29 attempts, as her .517 hitting percentage marked a new season high.

Meyers followed with 15 kills on .250 hitting while also chipping in 11 digs for her eighth double-double of the season. Webb, meanwhile, finished with 12 kills on .296 hitting.

All three were firing early for the Vikings, which helped the team get out to an early lead in the match. The trio combined for 16 of the Vikings’ 20 kills in a first set that saw them hit .562 and win, 25-15. Meyers led the team with six kills in the frame, but Lewis and Webb led the way in terms of efficiency. Lewis had five kills on only seven swings to hit .714 in the first set, while Webb recorded five kills on only six swings to hit .833.

The trio helped the Vikings maintain control in the second set. The Vikings led 9-4 early, and never allowed the Wildcats to get closer than four points the rest of the way. Webb snapped a 4-1 Weber State run that made it 15-11 with a kill and an ace back-to-back. Lewis then followed with a kill to give the Vikings a seven-point lead again at 18-11. The Wildcats got back within four at 18-14, but Lewis snapped the run with a kill. So it went, until Webb finished off the set with a kill at 25-18.

The third set required a little more toughness from the Vikings. Weber State ran out to a three-point lead at 9-6 and appeared to be stirring momentum for a potential comeback. But the Vikings responded with a 3-0 run a few points later that made it 10-all. Middle blocker Ashleigh Barto kicked off the run with an emphatic kill down the right sideline, while Lewis followed with a kill of her own before Meyers added an ace.

Weber State again edged ahead at 15-13, but a Wildcat service error, followed by a kill from Meyers got the Vikings level again at 15-all.

Neither team led by more than one point from there, until a block between Barto and Webb on the right side of the net gave the Vikings a 21-19 lead late. The Wildcats twice got back within one, but back-to-back kills from Lewis gave the Vikings match point at 24-21. Two points later, middle blocker Ashlyn Blotzer put down her seventh kill of the night to end it, 25-22 in the third.

“I liked the way we responded in the third set,” Seemann said after the match. “They made some plays, served tougher, and our pins were able to bail us out of some situations.”

All told, the Vikings finished with 55 kills Saturday, their most in a three-set match since they had 57 in a 3-0 win over Southern Utah on Oct. 14, 2017. Setter Madison Friebel orchestrated the attack, finishing with 45 assists while leading the Vikings to at least 16 kills in every set.

Defensively, the Vikings held Weber State to no more than 10 kills in any set. The Wildcats also became the 11th team out of the Vikings’ last 12 opponents to fail to hit over .200 against the Vikings.

Libero Ellie Snook anchored the back row for the Vikings while posting a match-high 17 digs. Meyers added 11, while Lewis and Friebel chipped in eight and seven digs, respectively. As a team, the Vikings out-dug the Wildcats 49-to-35.

Saturday’s match concluded the first half of the Big Sky schedule, with the Vikings 7-1 at the midway point of the conference season for the second straight year.

The second half of the Big Sky schedule kicks off with a three-match homestand that starts with a crucial match against second-place Sacramento State next Saturday, Oct. 22. The Vikings will follow that match by hosting Northern Arizona and Northern Colorado the following weekend before heading out on the road again.

It sets up as a potentially the pivotal stretch of the season for the Vikings. A lesser team could get nervous under the pressure, but considering how the Vikings swatted away its recent history of futility in Ogden Saturday, that’s not these Vikings.

Match Notes: The Vikings improved to 41-22 all time against the Wildcats with Saturday’s win…The Vikings have won 11 sets in a row now, as well as five matches in a row and 10 of their last 12…The Vikings swept their road trip to Idaho State and Weber State for the first time since 2013, and won both matches in sweeps for the first time since 2008…Snook’s 17 digs moved her past Southern Utah’s Sariah Pelaez (2013-16) for fifth in career digs within Big Sky Conference history.

Water Pipeline Back in Play? — The Future of Colorado’s Water Distribution