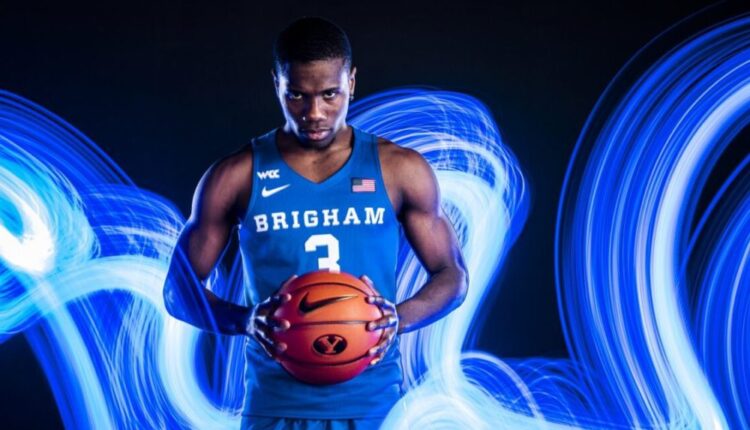 Rudi Williams announced his commitment to BYU on Saturday.

The transfer portal giveth and the transfer portal taketh away, and for Cougar Nation, good news finally came on the recruiting front when Coastal Carolina grad transfer Rudi Williams announced he’d be taking his talents to the Marriott Center this winter.

After losing the likes of Caleb Lohner, Gavin Baxter, Hunter Erickson and Seneca Knight to the portal and missing out on the services of Fredrick King to Creighton, Williams’ announcement was music to BYU fans’ ears as Mark Pope and his staff finally made an addition after so many subtractions. Williams sat down with Ben Criddle to discuss why he chose to come to Provo and what made BYU stand out from the rest of the competition.

“After coming back from all my visits, I just broke down all possible situations, and BYU had the best situation and it wasn’t even close,” Williams said in an interview with ESPN 960. “A lot of things came into play, relationships, opportunity, stage, resources, and connections, and when I checked my boxes, BYU didn’t miss.”

You don’t gotta like it but you gon feel it…CougNation let’s Roc🐱🔵 #Committed pic.twitter.com/1V3Ke7To5K

The fifth-year senior from Hamilton, Ontario will be making the fourth stop of his collegiate career after playing his first two years at Northeastern Oklahoma A&M, before moving on to Kansas State and Coastal Carolina. Williams averaged 14.7 PPG, 4.2 RPG and 3.2 APG for the Chanticleers last season, making him one of the hottest commodities after putting his name in the transfer portal in April. Once he entered the portal, Williams said he was looking for a change of scenery that offered something new.

“When I got in the portal, I just thought for my last year of college that I wanted to do something I hadn’t done yet. [I wanted to] play on a really big stage. Of course, I came from Kansas State and the Big 12, and it doesn’t get much bigger than that, but the year I played there was the COVID year, so it wasn’t the same atmosphere and environment it probably is today. I wanted to go to a bigger school where athletics are superior, with tradition, a good basketball team, and had a chance of going to March Madness.”

Williams had plenty of other “big stages” pursuing his talents, including perennial tournament contenders in San Diego State, Xavier, Florida, and Wichita State. Ultimately, the connections with the coaching staff and players, and the opportunity to play in front of near-sellout crowds every night swayed Williams to Provo.

“[Mark Pope and his staff] were real with me. I felt like they didn’t lie to me just to sell me on the spot. They told me what BYU was about on and off the court. They didn’t sugarcoat anything. We broke it down, and they had the best thing to offer me basketball-wise and told me how I could get better. It helps that they’re a younger staff, so it’s easier to connect with those types of guys and want to play for them and show up to work every day.”

Pope and Williams are cut from the same cloth. Both love to perfect their craft and study the game of basketball, 24/7/365. Williams said he and Pope were up into the early hours of the morning during his official visit getting shots up at the Marriott Center Annex, just talking about life and the game of basketball.

Williams has also been studying his new team as much as possible by watching through every game of the 2021-22 season in preparation for joining his teammates at the end of June. He said he was impressed with Fousseyni Traore and Gideon George in the film he watched, but one unexpected player stood out to him during his studies.

“One of the sleeper guys that I didn’t know about, and how good he was, what Spencer Johnson. I watched the Utah State game, and I was like, ‘I’d go to war with this dude.’ He was tough, being a competitor, playing hard, playing defense, and he made some shots. I was really impressed with him.”

Rudi is the third of seven siblings raised by his single mother, Beverly. Beverly immigrated to Canada from Jamaica, where she played NetBall, a sport similar to basketball. Rudi’s oldest brother, Deneil, and younger brother, Omeechi, played collegiate basketball, and his oldest sister, Tashae, played collegiate rugby. Rudi pointed to his mother as his inspiration and driving force behind all his successes.

“If it’s not for her, I’m not on this call. She taught me at a very young age hard work, sacrifice, and dedication. She’s a single mother, and I’m one of seven kids. There were a lot of days where I’m sure she didn’t want to go to work or bring us to school but she still did it, because that’s what she had to do to provide for us. Any type of success I’ve had previously or that I have in the future it’s because of her. I always write her name on my shoes because I wouldn’t be here if it wasn’t for her. I literally owe it all to her.”

Everything for her❤️✨going to take care of her and that’s a PROMISE pic.twitter.com/HGk3oPgtBy

When he’s not playing or watching hoops, Williams loves to watch movies. A self-proclaimed sneakerhead, Williams also loves to learn more about and collect shoes. Williams says he has a collection of upwards of 30 pairs of sneakers and prefers the Paul George or Kyrie Irving shoes when hitting the hardwood. He didn’t mention it to Pope on his visit, but being able to wear his favorite basketball shoes while playing was a dealmaker when deciding on his next school.

Williams brings a level of experience to a BYU team that will be in need of a leader following the departures of Alex Barcello and Te’Jon Lucas. Williams anticipates taking on a leadership role when looking ahead at his goals for his final collegiate season.

“I’m an older guy, and it’s a relatively young group, so I want to be a leader. I want to grow my game as much as I can, getting myself ready for the next level.”

As far as team goals go, it’s “NCAA tournament or bust” for Williams.

This is just the first of many additions coming down the pipeline for Mark Pope and his staff, with more prospects scheduling official visits. With well over 1,000 student-athletes still in the transfer portal and the Cougars holding three available scholarships, Rudi Williams will surely be the first of many recruits to commit to BYU.

To listen to the complete interview with Rudi on ESPN 960, click the link below.

If you love our content, please support our sponsors. We can’t produce our show and articles without our sponsors. They are also an official sponsor of the BYU football team. This article is brought to you by Built Bar, built.com. Use the “Criddle10” coupon code for 10% off your order.