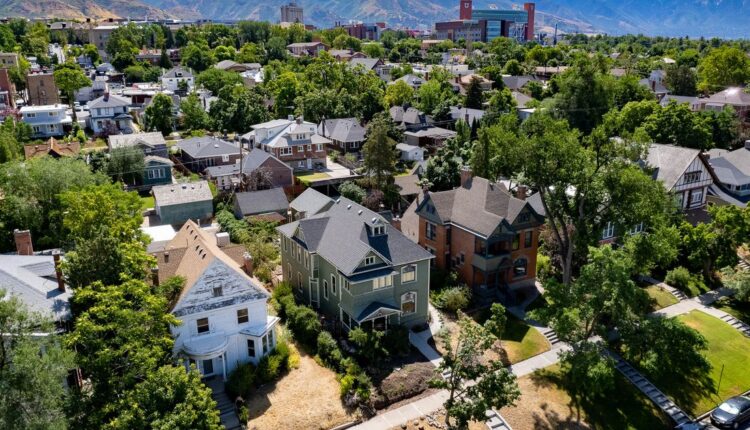 Salt Lake City, Provo-Orem housing markets are cooling down faster than most

New study ranks the northern Utah metro areas among the top 10 seeing a chill in the real estate market. Even so, two economists recommend home shoppers rent rather than buy — for now.

(Francisco Kjolseth | Tribune file photo) Salt Lake City, seen here, and the Provo-Orem metro area are among US housing markets that have cooled down the most as interest rates continue to rise, according to a new study by the financial technology site SmartAsset.

Home prices are falling faster and sales are slowing more swiftly in the Salt Lake City and Provo-Orem metropolitan areas than most real estate markets across the nation as a red-hot housing climate continues to cool.

A new report, in fact, ranks those northern Utah locales sixth and ninth, respectively, among the top 92 urban markets seeing this reversal as interest rates climb.

And with more price corrections likely on the horizon, a separate analysis suggests Salt Lake City, Ogden and Provo may also be better places to rent a home than buy — at least for now — even though rents are also escalating rapidly in those locales.

Housing markets with the most cooling as of late August were in the Western states: Boise, Idaho; Austin, Texas; Phoenix; San Jose, Calif.; and Las Vegas, according to the analysis from financial technology company SmartAsset — with Salt Lake City and Provo close behind.

The rankings, SmartAsset said, are based on a composite score of two basic metrics — reductions in home prices and signs of slackening demand — and both communities have seen dramatic turns in both trends.

Salt Lake City made SmartAsset’s list due to a high percentage of home listings that have seen price cuts — at 42%, or roughly 2 in 5 homes — as well as a drop in the number of houses sold per month compared to last year, which in Utah’s capital is also down by 42%.

The Salt Lake Board of Realtors, covering the five-county region centered on Salt Lake County, said home sales along the Wasatch Front as a whole fell by 27% in August and by 32% in September, according to preliminary numbers.

That equates to between 400 and 500 fewer homes changing hands now per month compared to pandemic peaks. At the same time, the median price on a single-family home in Salt Lake County appears to have crested in May, at $650,000, and is down at least 8% from that high as of August, at $601,000.

“The bidding wars,” said Steve Perry, the board’s president, “are over.”

SmartAsset said the Provo-Orem area was also seeing widespread price reductions, with 45.6% of listings seeing cuts — up from just over a quarter of listings fall 2021. And similarly, home sales in the Utah County seat have dropped by 57% year over year and its new home listings in August were almost double the number of homes sold.

Statewide, listings have topped 10,000 homes again, which is where they often hovered through 2018 and 2019, before COVID-19 and its intensifying effects on homebuying.

Active listings slipped to the 4,000 range in 2020 and 2021 amid that heightened demand and a widespread reluctance on behalf of sellers to list their homes.

Compared to thin inventory a year ago, additional home listings would otherwise be helpful to would-be buyers, giving them more from which to choose. But for many shoppers, the prospective monthly payments on those homes have as much as doubled in some cases and no longer pencil as affordable with the recent rate hikes. Hence, the sales slowdowns.

Real estate researchers in Florida now rank Salt Lake City, Provo and Ogden among the top US cities where consumers should “strongly consider renting rather than buying” in light of how relatively overvalued homes for sale are and the likelihood of further price corrections.

Their national ranking found that all 100 US markets studied tilted toward renting being more advantageous than purchasing a home at the moment, but Ogden, Provo and Salt Lake City placed among cities where metrics pointing that way were highest.

Utah was one of four states with two cities among their top 10, the researchers said. Others were Texas, Washington and North Carolina.

Listen: Medical Bills Upended Her Life and Her Credit Score