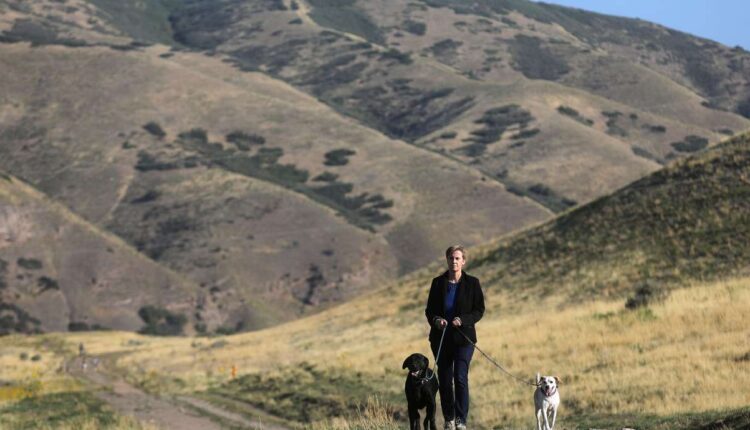 Melanie Malinka walks her dogs on the Bonneville Shoreline Access Trail in Salt Lake City on Sept. 14, 2021. It may be another year until construction of new foothill trails resumes, according to city officials. (Kristin Murphy, Deseret News)

It also caused a slide in public trust regarding how the city manages public lands.

“A lot of times (for) the city, our currency is our credibility, and we lost a lot with groups that traditionally have a high degree of confidence in the city,” he said. “We lost a lot of that with the way this was done, so I hope that never happens again to any of us in any of our districts.”

While Salt Lake City is now taking steps to add nearly a half-dozen new foothill trailheads, both city leaders and open country specialists agree that it’s more important to extend a pause on new foothill trails until a better process to develop trails is put in place . Members of the city council agreed to extend the pause on new trail construction until at least spring 2023.

Salt Lake City Department of Public Lands officials provided an information update on the Salt Lake City Foothills Trail System during a city council work session Tuesday afternoon. There, they discussed a snag in the trail evaluation process and new state and city funds for five new trailheads along the Bonneville Shoreline Trail in the city.

Allison Rowland, the public policy analyst for the city, said the city received a $1.3 million grant from the Utah Governor’s Office of Economic Opportunity for the project. The city plans to “rescope” $1.3 million in impact fees — fees received from new building development specifically used for parks and outdoor space — to match the grant.

It may be even longer for new trails to emerge, though. The council members appeared content with waiting longer before approving new foothill trails following problems with the Foothills Trail System master plan it approved before the COVID-19 pandemic in March 2020.

Residents complained of slide-offs, erosion and other issues long after the phase completion early last year, prompting Salt Lake City Mayor Erin Mendenhall to issue a moratorium on new foothill construction. Then, in September, she announced the city would continue that moratorium through at least June 2022.

Following that announcement, the Salt Lake City Department of Public Lands sent out a request for proposals seeking a trail design and land conservation specialist to evaluate the quality of the new trails.

But that, like the trailhead plan, hit a snag. In a March email, department officials wrote that when the January deadline arrived, staff found the proposals “did not adequately represent the evolving needs based on unforeseen factors and an extended scope of work.”

Tyler Fonarow, the recreational trails program manager for Salt Lake City Public Lands, explained that the error came on the department’s end, so the department canceled the request and rewrote it to find a candidate that can better assess the first phase of the new foothill trails . The change altered language from a design and build model, compared to a model that constantly restudies and redesigns to adapt to possible issues in paving new paths, he added.

Department officials believe they will have someone hired by the end of May. The evaluation of trails is then expected to take 10 to 14 months, meaning the evaluation of the first phase of trails likely won’t be completed until spring or summer 2023.

The reason we’re pausing is so we can get it done right — because if we don’t, we’re going to be having the same conversation in a much more painful and expensive way down the road.

During Tuesday’s meeting, council members also tentatively agreed to move ahead with corrections to some of the phase one foothill trails following Fonorow’s recommendations. Those changes will still need some clarifying steps and procedures before it’s fully approved.

“If we don’t take care of what we’ve done, it’s going to deteriorate and actually make things worse,” he said, pointing specifically toward trails in closed and “trenched” trail segments above Terrace Hills by City Creek Canyon.

Murdock said similar adjustments will be implemented for the second and third phases in trail creation, which are expected to begin after the review is completed.

The department believes the old mindset of trail planning and new trail implementation ultimately led to the issues that led to the pause, and it will take a more comprehensive approach in the future.

“Last time, we had a contractor that was anxious to go. They were getting paid by the mileage,” he said. “As we look at phase two and phase three, we want to prevent that from happening again.”

While city council leaders and public lands experts know yet another delay isn’t the news, many residents eager to try new trails want to hear, they believe it’s the best course of action.

Wharton points to long-standing trails constructed a century ago and wants the new trails to be as long-standing for the people who use them. He believes it’s worth it in the long run even if means the city will take “an extra year or two” to reach that goal.

Fonarow agrees, adding that he’s glad city leaders are willing to slowly roll out the next phase in new foothills trails. In the end, a well-constructed trail is the only path to rebuilding credibility.

“The reason we’re pausing is so we can get it done right — because if we don’t, we’re going to be having the same conversation in a much more painful and expensive way down the road,” he said. “The pause was naturally occurring anyway, and I think the hunger is so great right now that just a little patience can go a long way.”