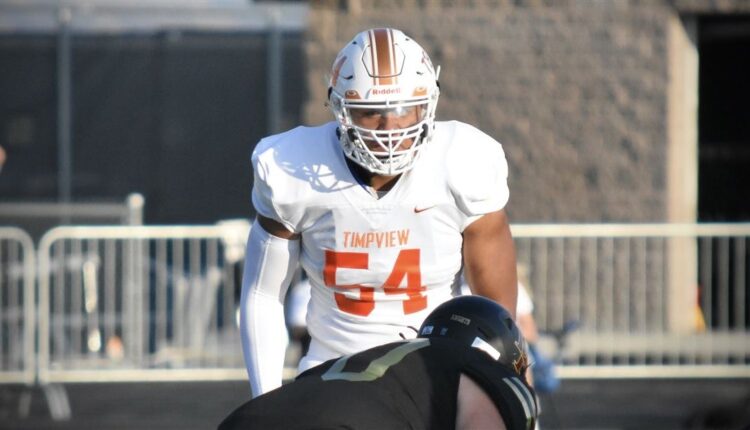 High school football in the state of Utah kicked off this past weekend and there are many fascinating storylines to watch as the lights began to flicker on Friday night.

Siale Esera is one of the group of recruits that will attract a lot of attention this fall.

The 2023 linebacker class from Provo, Utah Timpview has already passed the dozen supply mark and is considered one of the best defenders from the west. According to the industry-compiled 247Sports Composite Ranking, Esera ranks 16th among linebackers and 3rd in Beehive State for the 2023 class.

“My main focus was on season prep, conditioning, and training, “Esera told 247Sports.” I’ve heard a lot about Michigan, USC, BYU, Oregon, and recently UCLA. I visited Stanford and Cal just last month and the most important thing for me is to find the right academic program and form of football. I’m a big numbers person, so I love math on the academic and football side.

“I have a few more schools I would like to attend, but I loved my visits to Alabama and Georgia earlier this summer. Right now I have no real schedule for making a better commitment, staying healthy and sharpening the blade as best as possible. “

The 6-foot-3, 240-pound Esera received 33 tackles, including 10 for loss, in nine sophomore games last year. He’s likely to be more of a pass-rush role for Timpview this season.

After the NCAA’s temporary recruitment deadline went into effect in March 2020 due to the nationwide shutdown, it was lifted on June 1, 2021. This opened the floodgates for college coaches to receive potential student athletes and interact in person for the first time in nearly 15 months of the 2022 and 2023 class.

While many schools rushed to get top targets for unofficial and official visits to campus, camps became just as important this summer as many staff members wanted to assess and develop recruits they’d never been able to personally assess before.

This means that the commitment quota will increase even before the college season. Stay tuned to 247Sports for recruiting news and analytics all summer.