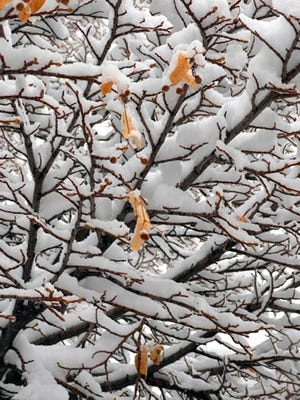 Six winter photos by readers of The Record at Stockton

The most recent challenge assignment was for Stockton readers to capture the winter season. Winter photos can be manifested in a number of ways. The weather is the most obvious one. Sunsets occur earlier than the rest of the year and are easier to stay up for. Migratory birds spend their winter in the area and can make for great winter pictures. Fifty-two photos were sent in by nine intrepid readers who braved the cold and wet of the season.

On a trip to Utah, Courtney Wise of Stockton visited a number of snowy spots. In Provo, she used her Apple iPhone 14 Pro to photograph a snow-covered tree. It’s labyrinth of branches creates an intricate pattern while the few remaining leaves add some spot color to an otherwise monotone scene.

Carolyn Silva of Jackson ventured no father than her front yard for her winter photo. On a foggy morning she captured the rising sun breaking through the mist with her Nikon D7500 DSLR camera. The low sun adds a warm glow as it peeks through some nearby trees and the mist creates an air of mystery.

Migratory birds spend their winters in the relatively warmer climates of the Central Valley. Cynthia Barker of Stockton took her Canon EOS Rebel T3 DSLR camera to the Colusa National Wildlife Refuge. She photographed a flock of snow geese taking flight at the refuge. Other geese also fly in the background as the Sutter Buttes rise in the distance.

Cedar waxwings also migrate from the north. Dave Skinner of Stockton saw 40 to 50 cedar waxwings in a Chinese pistache tree in his front yard. Hiding behind a pillar on his porch, Skinner equipped his Nikon D7500 DSLR camera with a 200-500mm telephoto zoom lens and photographed them as they playfully romped through the tree.

Winter is the season of the early setting of the sun and with it the wonderful colors of sunset. Steven Rapaport of Stockton photographed a weather vane atop a neighbor’s house. With his Canon 5D Mk IV, he captured the magenta rays of the last bit of sun before the evening fell.

High school football is a fall sport but for teams that are lucky and skilled enough to make it into the post season, games can last into the winter months. The Manteca Buffaloes went 11-1 during the regular season. They won the Sac-Joaquin Section and CIF Norcal Regional championships before falling to Pittsburg in the state semifinal game.

Mike Ratekin of French Camp who follows the team photographically, captured a tender moment between teammates at the end of that last game. With a Canon EOS R6 digital mirrorless camera, he photographed quarterback Hudson Wyatt hugging Thomas Perea as they comforted each other over the loss.

Record photographer Clifford Oto has photographed Stockton and San Joaquin County for more than 38 years. He can be reached at [email protected] or on Instagram @Recordnet. Follow his blog at recordnet.com/otoblog. Support local news, subscribe to The Stockton Record at https://www.recordnet.com/subscribenow.