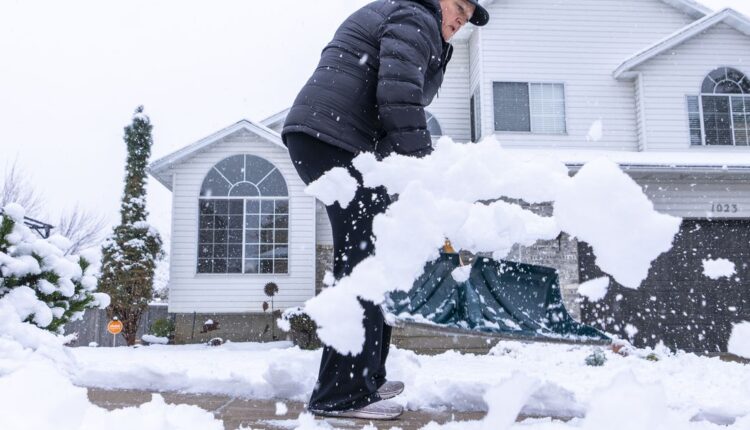 A cold front is moving in Wednesday afternoon, bringing strong chances of snow with it.

Snow began falling in Salt Lake City on Wednesday, hours after the National Weather Service issued winter weather advisories for much of Utah and a separate winter storm warning for the state’s southern mountains.

In Salt Lake City, after highs in the mid-40s early Wednesday, temperatures fell to the mid-30s by noon as a cold front moved in. Snow began falling mid-morning, with as much as 4-8 inches predicted in some areas .

Even more snow fell in the Wasatch Mountains — about 6-12 inches was expected north of Interstate 80, and 8-14 inches south of I-80, with even higher totals in some areas.

The weather service warned of winter driving conditions amid the storm, especially through mountain passes. Officials advised that backcountry access will become “treacherous” for hikers and hunters.

The winter weather advisories issued early Wednesday are in effect across much of the state through 6 am Thursday.

In Salt Lake City, there’s an 80% chance of more snow — 1-3 inches — on Wednesday night, with temperatures falling to about 31.

On Thursday, there’s a 40% chance of still more snow in Salt Lake City, with another half-inch possible. The forecast high is just 34.

Expect highs in the mid-30s on Friday, too, with temperatures reaching the mid-40s on Saturday and Sunday with a slight chance of rain and snow, according to the weather service.

The winter storm warning will be in effect in southern Utah’s mountains until midnight Thursday.

Heavy snow was expected in Brian Head, Bryce Canyon National Park and the surrounding areas, with total accumulations of 10-16 inches or more possible in some areas. Travel through the higher passes of I-15 could be “very difficult” on Wednesday night, according to the National Weather Service.

Cedar City on Thursday could see 4-8 inches of snow with temperatures in the mid-30s.

Rain is expected in southwestern Utah — there’s a 70% chance in St. George on Thursday with a high of around 50 degrees. Skies will clear by Friday, with temperatures rebounding to 54 on Friday, 61 on Saturday, and 65 on Saturday.

UHP: 1 killed in crash on I-15 near Kanarraville in Washington County