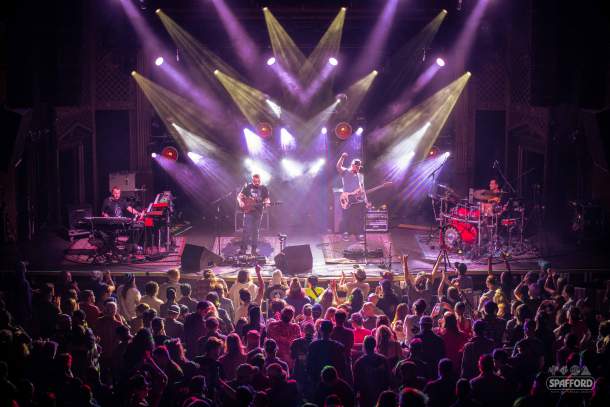 Following the release of their 4th studio album, Simple Mysteries, Spafford Polished off a three-day run in Colorado headlining shows in Boulder (11/3), Fort Collins (11/4) and Denver (11/5).

Spafford’s Thursday (11/3) show at the Fox Theater in Boulder, CO set the tone for the weekend as the band’s livestream on Twitch reached over 160,000 people. Simple Mysteries contains 8 tracks, 5 of which have debuted on this current tour, plus first-time studio versions of “Backdoor Funk,” “Shake You Loose,” and “Broken Wing.” With a seamless medley of fresh and classic tunes, as well as a variety of breakout covers, each night buzzed with its own novel energy.

Check out the Fox Theater livestream, as well as Saturday night’s (11/5) set from the Ogden Theater in Denver, CO. Nugs.net audio and set notes for all three shows in Colorado can be found below, as well.

set 1
The Man, All My Friends > Bee Jam > Living For the City [1]In the Eyes of Thieves, Salamander Song

set 2
Broken Wing, Standing Outside A Broken Phone Booth With Money In My Hand [2] > Lonely, Fake the Fate > My Road (My Road)

Encore
Leave the Light On

Spafford will continue to support the new record with tour dates all across the US this year, including extended runs in Texas and Florida, finishing up with two nights in their hometown of Phoenix, AZ for New Years. This week, the band rolled out their first 12 tour dates of 2023, with many more to be announced.

Spafford are known for their astonishing improvisational ability and off-the-cuff extended jams. The group paints a picture in real-time each night, with a musical palette known only to each other. It’s a private language comprising their talent as musicians, as well as their formidable catalog of influences, spanning 90’s alt-rock radio hits to Steely Dan and The Crystal Method.

Each Spafford show is a sonic pilgrimage, the journey of a team of musicians so in tune with each other that a single note communicates intent and purpose. Spafford is among the most creative and hard-traveling bands on the contemporary jam scene, performing countless sold-out headline dates along with high profile festival sets at Bonnaroo Music & Arts Festival, Firefly Music Festival, and many others.

Desert farms in Utah flourish with water from Colorado River