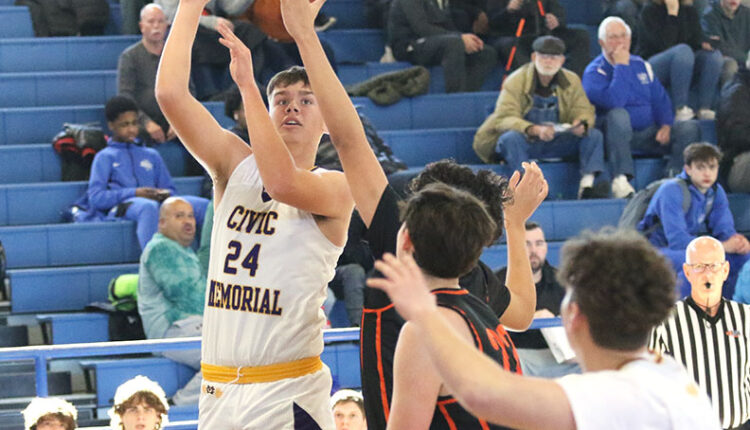 FREEBURG – After splitting two games on the final day of pool play, the Civic Memorial Eagles closed the Freeburg-Columbia Holiday Tournament on Thursday with a four-game split.

The Waterloo Gibault Hawks pulled away from a three-point halftime lead to beat the Eagles 70-55 in the third-place game of the eight-team tourney at Freeburg High School. Gibault is 11-3. CM, which matches its fourth place from last season’s tournament at Columbia, is 7-7.

The Eagles, who trailed 32-29 at the half and 50-41 after three quarters, got Sam Buckley’s seventh double-double of the season in the loss. The 7-foot senior finished with 25 points and matched his career high with 16 rebounds while blocking three shots. Buckley averaged 13.3 points and 11.3 rebounds per game in the tourney.

CM’s Adam Odgen (left) handles the ball against Waterloo’s Wyatt Fink (21) and Eli Schwehr on Tuesday at the Freeburg-Columbia Holiday Tournament. On Thursday, Ogden was named to the all-tournament team.

CM’s Adam Ogden made three 3-pointers and scored 15 points for the Eagles. The 5-11 sophomore averaged 13.5 points per game, while converting 8 of 24 3-pointers and was named to the all-tournament team.

Gibault got 21 points apiece from Gavin Kesler and Kameron Hanvey, 15 points from Kaden Augustine and seven points from Owen Mechler. Kesler, a junior who had eight rebounds and five steals, and junior Augustine made all-tourney for the Hawks.

The holiday tournament crown was the third in row for Columbia, which defeated Freeburg 60-55 in the title game. It was the fifth championship for the Eagles in the last 11 years, with Marquette Catholic winning the other six that stretch. 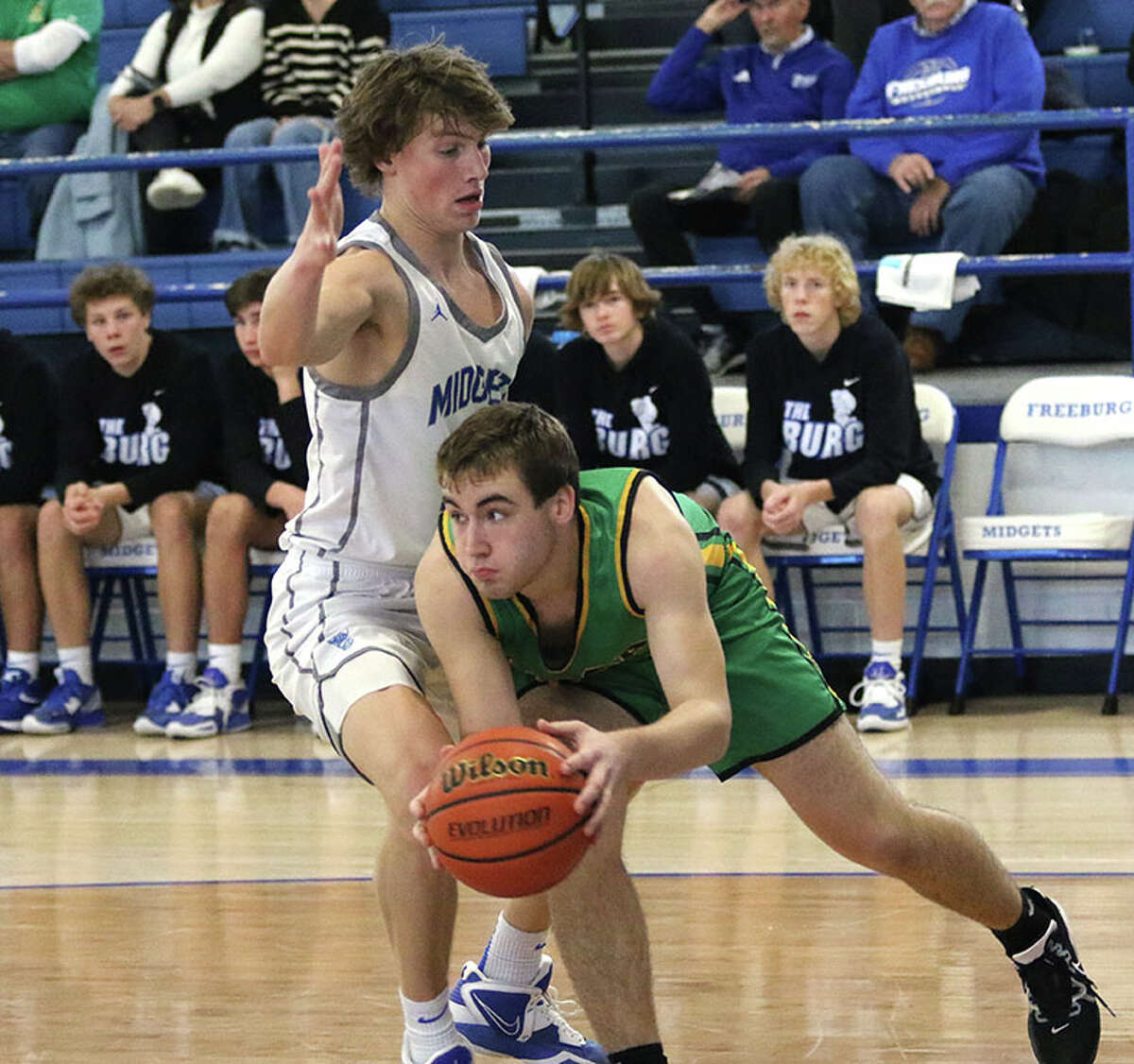 Southwestern’s Ryan Lowis (right) looks to pass out of trouble on the baseline against Freeburg’s Julian Trentman on Tuesday at the Freeburg-Columbia Holiday Tournament. Lowis was selected to the all-tourney team on Thursday,

Waterloo 63, Southwestern 34 – The Piasa Birds could not build on the momentum from a victory over Marquette Catholic a day earlier and lost to the Bulldogs in the fifth-place game at Freeburg. Waterloo is 4-9. Southwestern, which beat Marquette 45-43 to end a 12-game losing streak in the rivalry while beating the Explorers for the first time since 2009, is 6-9. 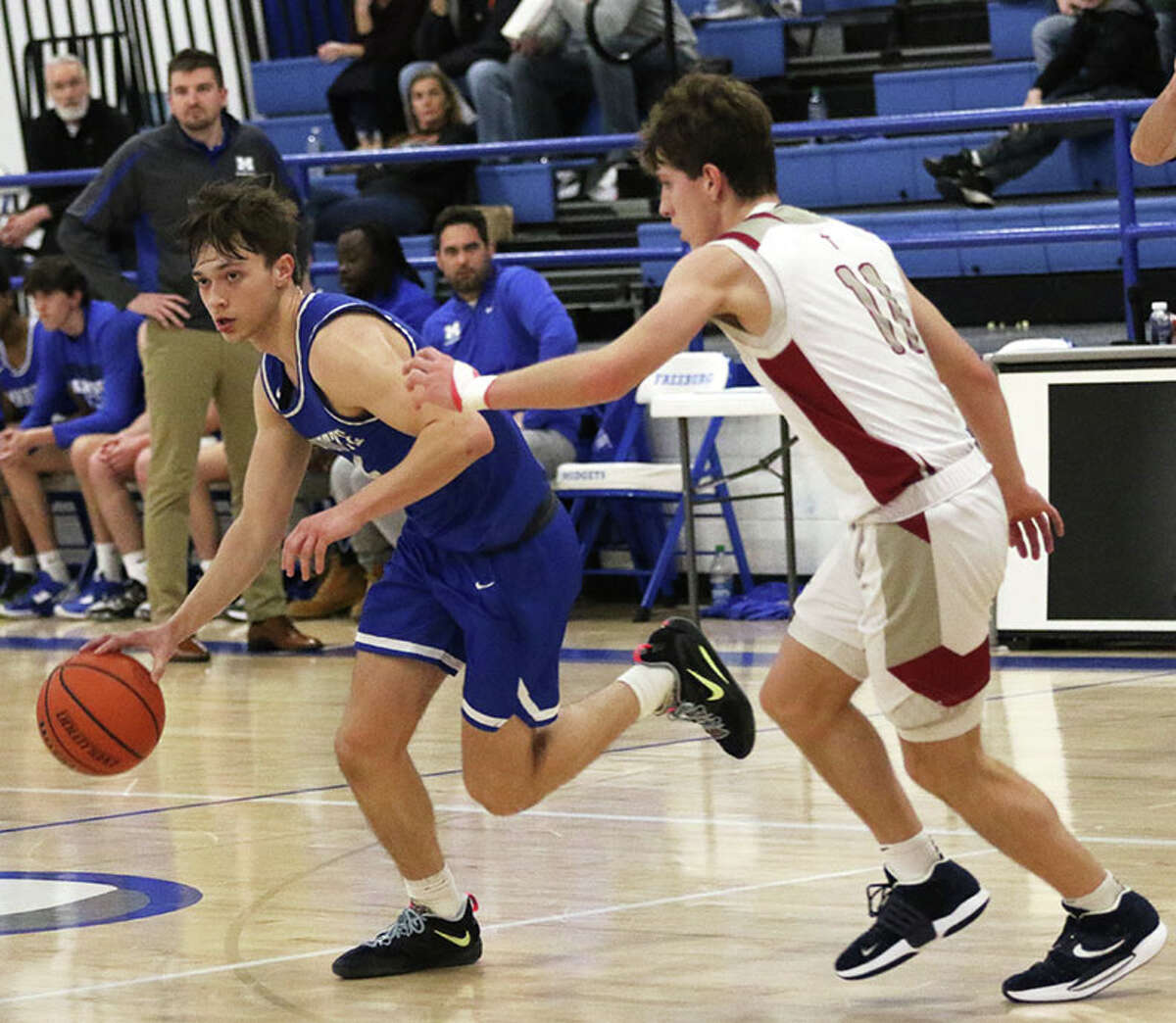 Marquette Catholic 64, Nelson County (Ky.) 33 – The Explorers salvaged a bit of satisfaction from a losing week at Freeburg by beating the Cardinals in the seventh-place game in the eight-team tourney. Marquette, which went 0-3 in pool play, is 8-6.

The game was tied at 11-11 and 21-21 at the end of the first two quarters before the Explorers hit the Cardinals with a 17-5 third quarter and 26-7 fourth. Braden Kline got all of his 3-pointers and scored 18 points in the second half while scoring 24 points. Kendall Lavender scored 11 points, Dre Davis had seven points and Parker Macias chipped in six points for Marquette.

Nelson County, from Bardstown, Kentucky, goes back home from his first holiday tourney at Freeburg or Columbia with a 3-10 record.

When will construction end on Salt Lake City’s 300 West?