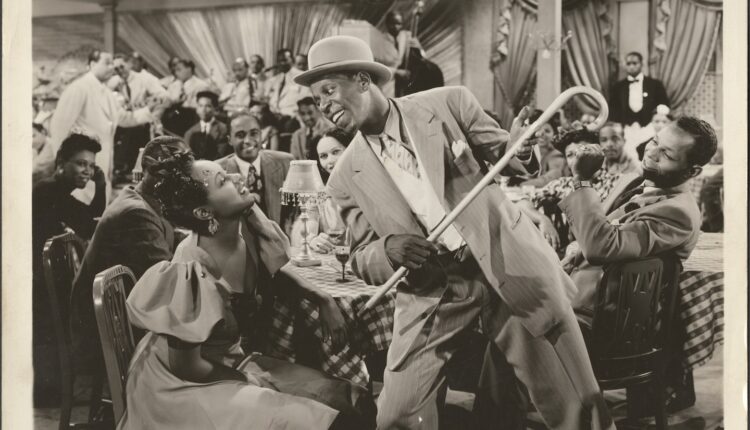 There’s a fascinating scene in the 1943 film “Stormy Weather” that, however brief, sums up the virtuosic brilliance of dancer John W. Bubbles. According to the penetrating and revelatory new biography, “Sportin’ Life: John W. Bubbles, an American Classic,” it also helps explain why this tap pioneer is virtually unknown today.

Wearing a bowler hat and twirling a cane, Bubbles, in the role of a rakish murderer named Domino Johnson, swans into a cabaret and unleashes a cyclone of spins, floating slides and crisp, sudden stops that are at once familiar and uncanny. The tight turns, the coin-flip toss of his hat, the way he freezes his strut with head bowed, one knee bent: It’s familiar because you’ve seen the moves copied by Bob Fosse, James Brown and Michael Jackson.

Uncanny, though, is Bubbles’s crisp clarity and liquid ease. He’s in perfect command of his body, a body that flies in different directions then snaps together so fast you might suspect there’s film trickery at work. He is, by the way, also singing, cheekily, and flirting with the ladies at their tables, teasing them with little dips of his shoulders. He emanates edgy glamour. The scene buzzes with electricity and visual surprise.

“Sportin’ Life,” by Brian Harker, author of books on Louis Armstrong and jazz, is the first life history of this dance artist, an astonishing fact given his onetime renown. For 36 years Bubbles was part of the song-and-dance team Buck and Bubbles, one of the longest-lasting partnerships in vaudeville history. The duo was featured on the world’s first television broadcast in 1936. They were chauffeured around London by the Prince of Wales himself, pre-abdication, after a command performance for Edward and his not-yet-wife Wallis Simpson.

Even by the racial confines of the day, Bubbles was movie material: tall, handsome, killer smile. An extraordinary showman. In the very few clips that exist, he’s a natural. In the 1937 feature film “Varsity Show,” starring Dick Powell and Priscilla Lane, Bubbles tap dances brilliantly (playing a janitor, no less), accompanied by his pianist partner Buck (né Ford Lee Washington). That, and Bubbles’s brief scene in the all-Black “Cabin in the Sky,” was about all Hollywood wanted from him.

The film industry had a blind spot (more on that soon), but George Gershwin didn’t.

Harker, who teaches music history at Brigham Young University, takes his book’s title from the leading role Bubbles created in Gershwin’s 1935 all-Black opera “Porgy and Bess.” Sportin’ Life was the showstopping villain of that historic production: a dancing drug peddler who was dangerous and — true to Bubbles’s nature — irresistible. Gershwin gave him the part; no audition necessary. He called him “my Bubbles.”

Because Bubbles was a self-taught dancer, didn’t read music and had no opera experience, Gershwin tutored his “unconventional protege” himself, playing piano in his apartment while Bubbles sat next to him and sang. It was a life-changing experience. For the rest of his career, “It Ain’t Necessarily So” was Bubbles’s unofficial theme song. Gershwin also prompted Bubbles to use his famous feet to dance out the songs note by note.

A lot was riding on those feet. Before Gershwin came along, Bubbles had insured his ankles for $50,000. His influence had spread throughout the tap world. Where Bill “Bojangles” Robinson was revered for his light, crystalline pattern and perfected patterns, Bubbles had a more powerful, dynamic and spontaneous style. Most tappers at the time danced on their toes, but Bubbles brought his heels down, adding rhythmic complexity and syncopation. Followers dubbed him “the father of rhythm tap.”

Yet Bubbles died poor in 1986, at age 84. Celebrity admirers chipped in for his funeral, including Bob Hope, Liza Minnelli and Johnny Carson, on whose TV show Bubbles was a regular, years earlier. Bubbles had had moments in vogue as nostalgia swept through the 1950s and ’60s. In the ’80s, rumors surfaced, Harker notes, “that the hottest pop star of the day, Michael Jackson, had named his pet chimp after the great dancer.” Outside tap connoisseurs and enthusiasts, few know Bubbles’s name today.

Harker meticulously plots the points where racial discrimination limited the showman’s opportunities on the vaudeville circuits and in Hollywood. Still, Bubbles was helplessly in love with the theater. Born John William Sublett Jr. in Nashville in 1903, he got his stage name as a child from a vaudeville manager captivated by his upbeat nature. By 14 he’d teamed up with Buck.

That relaxed air hid the duo’s special sauce: absolute mastery. “In their virtuosity, Buck and Bubbles heralded a new age of Black achievement,” Harker writes. They were the act no one wanted to follow.

Putting tap where we wouldn’t expect it

Yet Bubbles’s legacy surely would be different if he’d had the film career of, say, Fred Astaire or Bill Robinson. Harker believes racism isn’t the only reason Bubbles didn’t make it in movies. Certainly, many vaudevillians made a successful leap to film — Astaire, Ginger Rogers, George Burns, to name a few — and there were Black artists among them. Robinson, Stepin Fetchit and Eddie Anderson “all succeeded in Hollywood despite the color of their skin,” Harker writes.

Harker makes an interesting argument for why the dancer bombed in Hollywood: He was too sexy. “More than any other single issue,” Harker asserts, “filmmakers were almost certainly terrified by Bubbles’s sexual potency.”

In that “Stormy Weather” scene, there is a masculine heat radiating through his sinuous agility.

He was so unlike Robinson, who, for example, paired up with a young Shirley Temple in “The Little Colonel,” in the role of an avuncular, deferential domestic. By contrast, Harker notes, “slinky sexy” is how film critic Pauline Kael described Bubbles.

Writes Harker, “For Clark Gable, sex appeal was a key to success; for John Bubbles, it was fatal.”

It remains stupefying that the movie industry chose not to capitalize on Bubbles’s talent and magnetism. The ironies and injustices are plain. Harker opens his book with Fred Astaire paying Bubbles an astronomical $400 for a tap lesson in 1930 — an extraordinary move.

Harker makes clear that Astaire himself never disclosed the lesson. The account comes from Bubbles, who told the story in several published interviews. Harker believes it’s true, but even if it isn’t, he writes, it makes a point. “Astaire’s complex stepping … could only take place within a world informed by Bubbles’ innovations. Whether by studying with the man privately or observing him from afar, the result was the same: Astaire borrowed ideas from Bubbles. Everyone did.”

Influence, though, wasn’t enough to ensure immortality. Harker’s book is not only vivid history but a poignant rumination on what might have been — what greater art Bubbles might have made, if only the world that applauded him hadn’t also hemmed him in.

Sarah L. Kaufman is The Washington Post’s dance critic and author of “The Art of Grace.”

A note to our readers

We are a participant in the Amazon Services LLC Associates Program, an affiliate advertising program designed to provide a means for us to earn fees by linking to Amazon.com and affiliated sites.