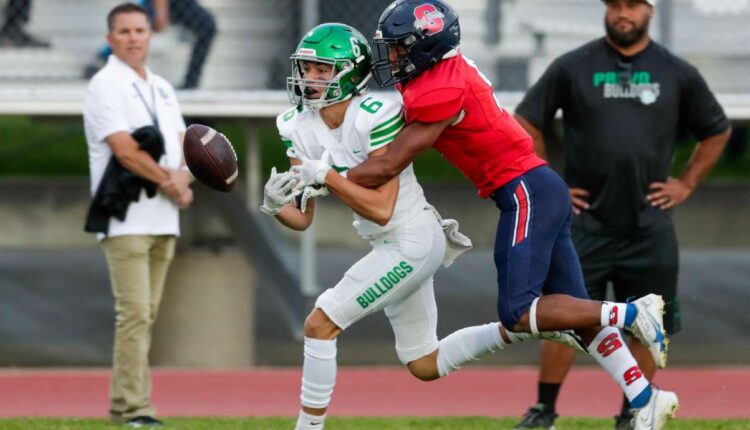 Drew Deucher (6) of the Provo Bulldogs misses a catch while being defended by Jaden Toki (9) of the Springville Red Devils in Springville on Thursday, Sept. 15, 2022. The Red Devils won 18-14. (Ben B. Braun, Deseret News)

SPRINGVILLE — By the end of the night, and with clouds of thunderstorms swirling around them — including a lightning strike just under 10 miles as the final seconds were ticking off the clock — Springville’s defense just needed one more stop.

Lucky for the Red Devils, it was nothing new.

Dallin Johnson had a sack on the 11-yard line with 47 seconds left, and Tevita Valeti ran for close to 300 yards with two touchdowns on an eye-popping 48 carries as Springville rallied to hold off Provo 18-14 Thursday night to open Week 6 of the 2022 high school football season.

“It was a good one,” said Johnson, whose side held the Bulldogs to 64 rushing yards. “I’m super proud of our defense; we’re a defensive team. The years that we’re good, we have a good offense because we always have a good defense.

“I’m super proud of the way we stopped the run, and proud of our DBs to break up some tough passes.”

That’s just how Springville does it with Valeti, who had 743 yards and eight touchdowns on 109 carries in the first five games of the season.

“We knew it was going to be that kind of ground-and-pound game,” Springville coach Dave Valeti said. “We preach to our guys to find a way in the first half, and then wear them down in the third and fourth quarter. We really started to wear on them.”

Nobody will call Thursday night’s game an artistic masterpiece — except maybe a handful of defensive coordinators and offensive line coaches — but they all count the same in the standings for the Red Devils (5-1), who improved to 2-0 in Region 9 play with the win. Springville held the Bulldogs to 168 yards of offense, including an uncharacteristic 32 yards on 12 carries from Provo standout Jamison Harward. The 5-foot-8 senior entered the game averaging 7.99 yards per carry with seven touchdowns on the year, but found running against Johnson and the Springville defense tougher than expected.

Harward, for his part, also forced a fumble on a potential 34-yard touchdown run from Valeti that ended on the 2-yard line instead.

Springville kept Harward out of the end zone all game, giving up only a 2-yard TD dive by Tagai Lesa in the first quarter to take a 12-7 halftime lead behind 118 yards and a touchdown from Valeti.

But the Bulldogs — who forced two fumbles, two punts and an interception in the second half — took a 14-12 lead when Drew Deuchar picked off a pass in the end zone and returned it 100 yards with 2:39 left in the third quarter for the visitors’ first lead of the game.

But Springville got the ball back with plenty of time, and ran Valeti straight to the ice bath with a 2-yard touchdown on his 42nd carry with 6:21 remaining for what amounted to the game-winning score.

“We huddled the guys up after that big play; the momentum was totally out of our selves,” Valeti said. “We told the guys to have each other’s backs, and I asked if they had (the offense’s) back. Tonight, they did.

“Their O-line has got a good unit, and a bunch of our guys go both ways on the defensive line. We challenged them: If they can play with this O-line, they can play with anybody in the state. I’ m proud of my group for keeping a level head and finding a win.”

Still, Provo had one final chance to win as weather swirling around the field prior to a torrential deluge and medical staffs and athletic directors were checking lightning radar every minute with strikes.

Provo quarterback Kyson Condie led the Bulldogs inside the 10-yard line with one minute left. But the visitors couldn’t seal the deal, and when his final pass sailed out of the back of the end zone, the Springville sideline erupted with a roar loud enough to resemble thunder in the distance.

The Red Devils intercepted a pass at the line of scrimmage on the first drive of the game, forced two more fumbles, a sack by Johnson on fourth down, and six punts before the end-of-second half procedure to clinch the win.

Johnson, a 6-foot-4, 270-pound junior who plays on both lines, is committed to BYU, as is quarterback Ryder Burton and a handful of seniors from last year’s squad that have opted to walk-on. Just last week, the Cougars also extended an offer to Kinikinilua Fonohema, a 6-foot-4 edge rusher who recovered a fumble Thursday night.

Maybe head coach Kalani Sitake ought to take a look at some more defensive players at Springville.

“We need (Kinikinilua) to commit,” Johnson said. “He’s an animal. But we’ve got a whole bunch of absolute dogs. The whole team, the whole team.”

Tisi Valeti also ran for a touchdown for Springville.

In addition to his interception return for a touchdown, Deucher also caught three passes for 42 yards — all in the second half — for the Bulldogs (4-2, 1-1). Condie threw for 104 yards and an interception.