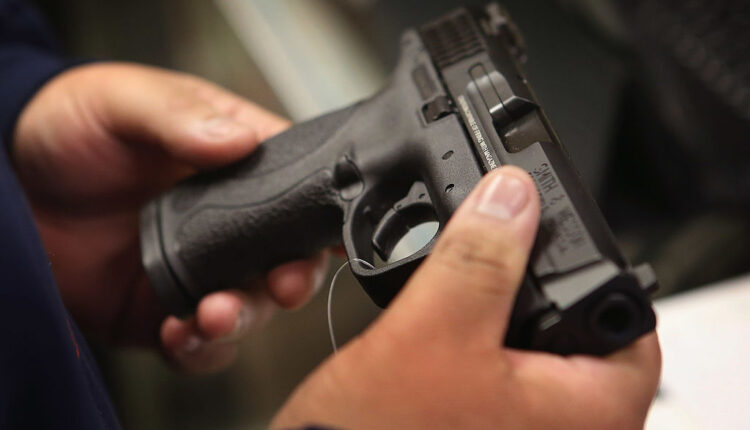 ST. GEORGE, Utah (ABC4) – An individual has been charged on July 7 in relation to an incident of firearm theft that occurred in a St. George gun store in March 2022.

Brett Clinton Combs, 41, of Las Vegas, was charged by a federal grand jury in the District of Utah with theft of firearms from a federally licensed firearms dealer and being a restricted person in possession of firearms.

According to an official press release, Combs allegedly used a rock to break into the Dixie Fish and Gun store located at 1088 East Tabernacle Street on the morning of March 4. A “glass break” alarm notified law enforcement of the forced entry. Upon arrival, officers found the front glass door of the business shattered and several cases displaying firearms damaged.

According to the US Attorney’s Office, video surveillance showed a single suspect break into the business with a rock before removing several firearms from their cases and placing them in a duffle bag.

An inventory count discovered that 17 firearms, all of which were 9mm semi-automatic pistols, were missing from the Dixie Fish and Gun store.

The official press release notes that a substance resembling blood was found on broken glass from one of the firearm display cases and submitted to the Utah State Bureau of Forensic Service (UBFS) for analysis. The sample was determined to be Combs’ blood. Additionally, the US Attorney’s Office states that one of the stolen firearms was recovered in relation to a separate crime in Las Vegas.

At this time, Assistant US Attorneys from the US Attorney’s Office for the District of Utah are prosecuting this case, while an investigation is being conducted by Special Agents from the ATF along with officers from the St. George Police Department.

How well is the Trump factor playing?