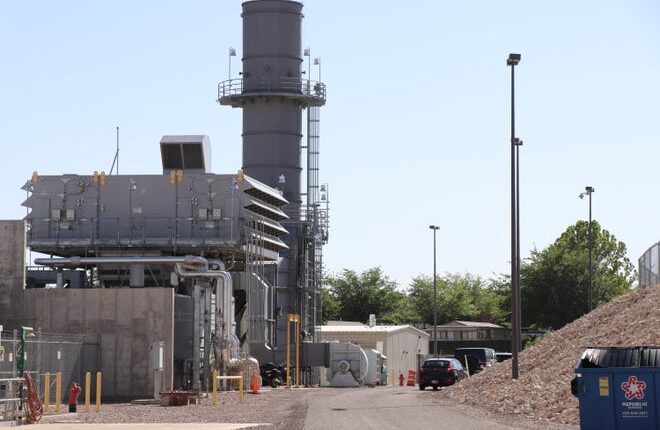 With Utah Gov. Spencer Cox releasing a new statewide energy plan, officials in St George say they are looking to lean a lot less on coal for electricity and instead turn to renewable energy and natural gas.

A typical summer day requires about 200 megawatts of power, and the current mix includes five resources of energy: coal, hydropower, natural gas, renewable energy and energy bought on the open market. The city gets this energy from a mix of pre-arranged contracts and market purchases, according to Laurie Mangum, the city’s director of Energy Services.

Meeting the demands of summer

Members of the city council and other city officials toured a key part of the city’s infrastructure last week, inspecting the Millcreek Generation Facility, a natural gas-powered set of generators the city turns on during the summer months when temperatures soar into the triple digits and air conditioning increases power demands.

The city spent more than $60 million building out the facility and it only runs about half of the year, but it’s now helped the city meet its peak summer energy demands for the last 16 years and counting, according to Mangum.

St. George can produce 73.6 Megawatts of energy with the facility, enough to meet nearly 40% of the city’s peak summer demand. It gives the city an important tool for keeping up, as summer electricity usage is typically double the usage in winter.

Other cities in southwestern Utah use similar strategies, as both Washington City and Hurricane have built smaller versions. Hurricane’s can produce up to 14.3 megawatts while Washington’s can produce six.

Mangum says this facility will continue to play a vital role in the city’s energy future, as demand for power is expected to increase with St. George’s growing population. In the past 10 years, more than 5,000 power meters have been added to the St. George system, rising from 27,410 meters in 2012 to 32,757 meters this year, roughly a 19.5% increase.

St. George supplies the majority of its residents with power, but most residents and businesses south of the Virgin River receive their electricity from Dixie Power, a separate energy cooperative.

Both utilities are forecasting fast-paced increases in demand. The latest 2030 population estimates project the city will have just over 148,000 residents by then, up more than 50% from the 95,000 counted in the 2020 census.

With the city planning on using less coal and more renewable energy, a major focus is the expansion of solar energy in and around St George, according to Mangum.

In the newly released Utah Energy and Innovation Plan, the sunny southwest corner of the state is promoted as a prime spot for continued solar development. The Environmental Protection Agency rates St. George as “very high” on the ultraviolet index because the area gets a large number of sunny days, and the EIA ranks Utah as the 10th best state in the US for solar generating capacity.

Mangum says the city is purchasing “a lot” of solar by entering into energy contracts with solar facilities in the state to provide power to the city. At the same time, she said she expects local residents and businesses to increase the usage of rooftop solar panels. She says the city is currently getting “buried” with applications for rooftop solar powers.

Just five months into 2022, the city has received 100 applicants for rooftop solar panels, which already exceeds the 69 applications the city received for the whole year of 2021. The city is set to have more than 500 different rooftop solar locations in 2022 after only having 41 locations 10 years ago, according to data presented by Mangum.

But even with St. George’s reputation for sunny days, there is a drawback to solar energy.

Mangum says the current makeup of rooftop solar in St. George can provide about four megawatts of energy during peak hours.

The city might be “really pro-solar”, but it will need to rely on other energy resources for the foreseeable future, Mangum said.

That leaves St. George separate from the goals expressed by some other Utah cities in the Utah Energy Plan, where 15 cities committed to 100% renewable energy use by 2030, including Ogden and Salt Lake City.

Having a mix of energy resources allows St George to keep its electricity prices low, according to Mangum. The city currently charges two different tiers on usage, a lower tier (0 – 800 kWh) at 7.5 cents per kWh and a higher tier (800+ kWh) at 9.1 cents per kWh.

Those prices put St. George close to the statewide average of 8.4 cents per kWh and leave it well below the national average of 11.55 cents per kWh, according to the EIA.

The base charge for everyone is $18.65, according to the city’s website, and covers “the cost of doing business,” which covers repairs and staff expenses within the St. George Energy Department, according to Mangum. She said the city plans to keep the per kWh charge low but is looking to raise the base charge by $1 this year to help fund the expansion costs needed for the city to provide power to its ever-expanding population.

“Until you have high rates, people don’t really have a reason to go out and spend the money to fix the things that they need to fix,” she said.

Encouraging energy conservation is important for the high-demand summer months since just last year St. George and Dixie Power created the “Use Less, Save More” program to provide guidelines on when power should be conserved.

Last June, Dixie Power sent out a red alert status to its customers asking for energy conservation to avoid potential blackouts due to the triple-digit heat of the summer.

As St. George plans to continue to change its energy resource mix and expand its service to handle increases in temperatures and demand from customers, Utah is also planning to expand its energy portfolio to meet future demands. In the Utah Energy Plan, six key commitments are highlighted around energy:

The plan also covers creating charging networks for electric vehicles (EV) that should cover the major roadways and tourist attractions in the state.

“Utah’s goal is to have EV fast chargers available every 50 miles of interstate and state highways of importance. In the next five years, Utah’s EV corridor will extend to all its Mighty 5 National Parks and connect rural areas in the event of a national emergency,” said the Utah Energy Plan.

To reach that goal the state says it’s willing to work with any organization — both public and private — if they want to host an EV charging site. In the 2022 session the Utah Legislature approved $3 million of the state budget to be used to facilitate placing EV chargers in rural areas to encourage more EV use.

Sean Hemmersmeier covers local government, growth and development in Southwestern Utah. Follow on Twitter @seanhemmers34. Our work depends on subscribers so if you want more coverage on these issues you can subscribe here: http://www.thespectrum.com/subscribe.

Allegiant to begin flights to Provo, Utah in August