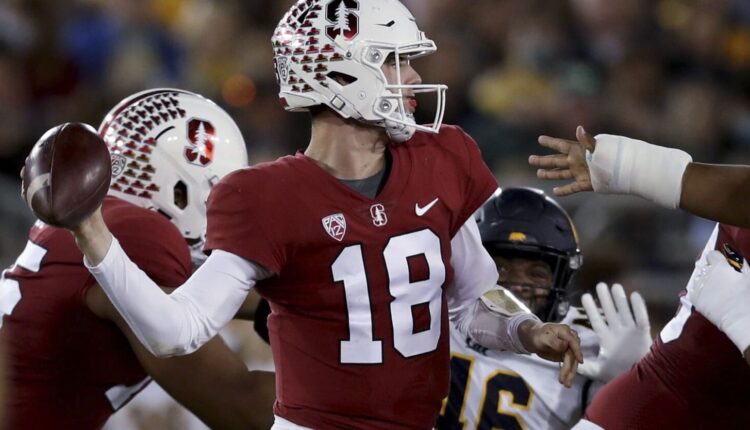 Stanford football: Can Tanner McKee play well for the Cardinal?

Editor’s note: Fourth in a series of articles examining each of the Pac-12 football teams heading into the 2022 season.

Last year, Stanford suffered its worst season since 2006 with a 3-9 record.

Despite that, coach David Shaw, who’s entering his 12th season at the helm, did not make any changes to his staff.

The highlight of the season came when the Cardinal upset No. 3 Oregon in overtime in early October. But Stanford suffered a meltdown at the end of the season, including a 52-7 home loss against Utah.

Shaw is the program’s all-time winningest coach, so he is given the benefit of the doubt.

“I appreciate being in a place where doing the right thing is important, not just doing things to appeal people,” Shaw told The Athletic. “For me personally, I think I’ve earned a little leeway to make the decisions for myself and for the program that I’m in charge of. … I like the place that we’re in now.”

One of the reasons for optimism on The Farm is the return of quarterback Tanner McKee, who took over as the starter early in the season.

He finished the season having completed 206 of 315 passes for 2,327 yards with 15 touchdowns and seven interceptions.

Shaw has said he believes that McKee could develop into one of the best quarterbacks in the country.

“We want him to take that next step,” Shaw said. “He’s had an outstanding spring. He hasn’t had his top targets at receiver or tight end.

For him, I want him to jump on to the national stage. We think he’s that talented, we think that he’s that good. We think he has that type of group around him. We’ve crafted a lot of what we do around his ability. I’m expecting him to take the ball and run with it.”

However, the offensive line will need to improve dramatically because it allowed 32 sacks last season. Stanford ranked No. 122 in total offense in 2021.

Shaw is changing from a 3-4 defense to a 4-3 scheme for 2022. Edge rusher David Bailey, one of the top prospects in the country, enrolled early at Stanford and the Cardinal is hopeful that he’ll make an immediate impact.

“So many guys take a while to get going when they come to college. Especially a guy that should be a senior in high school. David Bailey has not taken a while. He’s lived up to the hype. He’s the best pass rusher on the West Coast. He’s shown that.”

Shaw is hoping to instill the toughness that the program has been known for over the years.

“I anticipate this will be one of our best offseasons ever,” he said.

Stanford head coach David Shaw stands in front of his players during a timeout during game against Utah, Friday, Nov. 5, 2021, in Stanford, Calif.