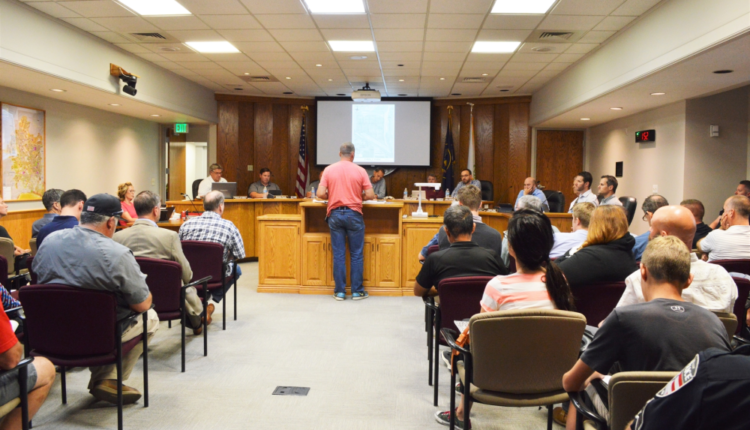 The Lehi City Planning Commission was down by more than half its number at the final meeting in August last week. Roger Ellis took over chair duties, and commissioners Heather Newall, Scott Carlson and Scott Bunker worked through a lengthy agenda with unanimous votes.

One of the two requests from Lehi City for conditional use approval of a Strata Network shelter brought several residents to City Hall.

“I live just north of this location with my wife and four kids,” Lehi resident Nick Bender began. “The City needs to make a better case for why this building needs to be in this location. Right now, we’re being asked to take their word for it that this is the only location where it could go. The City might own this land, but it is for public use. It’s like a neighbor wanting to plop a shed in the middle of a park.”

Bender and a few other residents pointed out that children were waiting for the bus in that area and would most likely climb on the shed. He suggested putting the structure in the smaller, less utilized park nearby.

“It amazes me that everyone wants fiber optics, but as soon as you put it on public land where there’s an existing easement, people say they don’t want it,” said resident Paul Ferris. “I say put it as close to my house as possible, so I can have the most reliable network possible. It’s already an allowed use. The City was kind enough to notify us that it was coming. I say put it in. Fiber optics could make a big difference to those of us who work from home and all the students doing their homework.”

The site location at 355 North 2375 West was determined by Lehi City Power because it is next to existing facilities and 15 feet from a grassy area. The Strata Network shelter will also be surrounded by a tall fence. The Planning Commission did not have the power to move the shelter, but they put conditions like the fencing and lighting in the motion before voting to approve the conditional use permit.

– Gemstone Development’s request for a zone change from RA-1 (residential agriculture) to R-3 (high-density residential) on 1.33 acres at 690 East 200 South.

– Lehi City’s request for conditional use approval of the Strata Network shelter at 945 North 200 East.

– Two requests from Lehi City for conditional use approval for 8-foot fences at 3300 West 930 North and Chestnut Street and Flight Park Road.