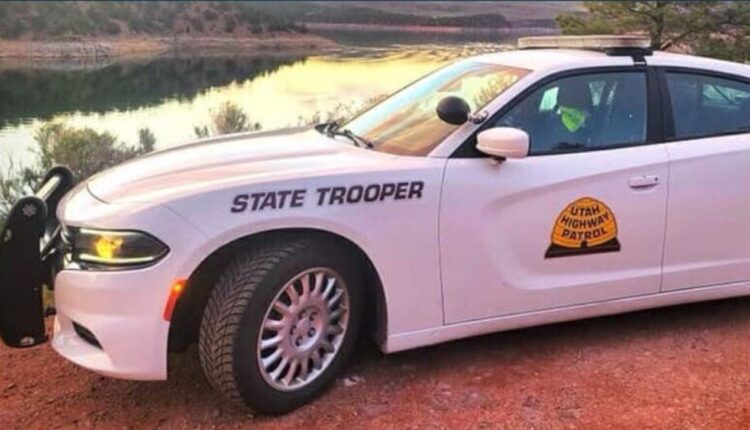 Utah Highway Patrol clocked the speed of Edwin Hyung Cho, 46, at 100 to 120 mph, according to court documents filed in the case.

At 12:27 pm, license plate reader system in Nephi notified officers of a stolen vehicle, a silver Dodge Journey. The SUV was located in the parking lot of a Nephi Flying J.

“Nephi City Officers attempted to make contact with the vehicle and the vehicle fled recklessly driving behind the Denny’s and into the Flying J parking lot and then getting onto I-15 southbound at the 222,” says a probable cause statement filed by a Utah Highway Patrol officers. “At this point I engaged in a vehicle pursuit with the stolen vehicle.”

The SUV passed other vehicles on the right side, in the emergency lane, several times, the statement says.

“I was unable to keep visual of the vehicle due to traffic becoming too heavy. I then terminated my involvement in the pursuit.”

The officer alerted troopers to the south, and called for a DPS helicopter. Vehicles to the south on Interstate 15 did not see the SUV, and determined it may have taken State Route 50 at Scipio from Millard County to Sevier County.

“Shortly after, units in Sevier County had located the vehicle at a high rate of speed and it had once again fled from additional officers and now they were in pursuit of the vehicle,” the probable cause statement says. “Units pursued the vehicle on I-70 for several miles until they came upon a construction zone at which point they had terminated.”

The vehicle flipped through the median to avoid the construction zone and attempted to travel back eastbound. The individual saw the troopers waiting and then took Exit 1 and entered Cove Fort and “went through this area at a high rate of speed. Another trooper engaged into a pursuit with the vehicle and once again it started to flee. The vehicle at one point slowed to a speed where the trooper performed a pit maneuver but the vehicle was able to get back on the road and continue.

Back to Juab County

The SUV made it back to I-15 northbound. Troopers spiked it at mile marker 156.

“The vehicle slowed its speed and started to exit the freeway at mile marker 158 northbound. At this time the pursuing Trooper performed a successful pit maneuver,” the statement says.

Several glass pipes and pieces of burnt tin foil could be seen inside the vehicle.

“The driver admitted he was smoking the rest of what he had before he was going to jail.”

Cho was arrested, and officers determined he was wanted on a warrant out of Salt Lake City for theft and use or possession of drug paraphernalia, arresting documents say.

Cho also has a lengthy criminal history for possession of a controlled substance. Cho was cleared by medical staff on the scene and then transported to the Juab County Jail. He agreed to blood and urine tests, “but due to Cho’s IV drug use medical staff were unable to gather a blood sample.”

Results of the urine test are pending, the arresting documents say.

Cho was booked into the Juab County jail on suspicion of:

Cho is being held without bail.

What’s the best pizza in Utah?