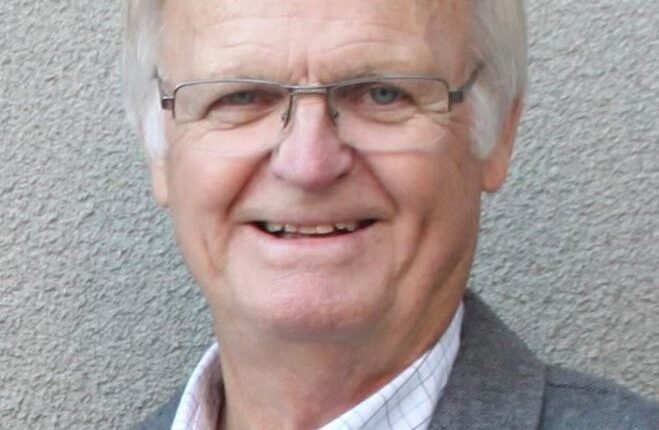 Terry Lee Monson, 76, passed away peacefully from Lewy Bodies Dementia on Nov. 30, 2022, with his wife and children surrounding him.

Terry was born on April 19, 1946, in Ogden, Utah, to Dale and Dayle Monson. He was the youngest of three boys. Terry had a reputation for being a rambunctious handful and a tease. He enjoyed playing basketball in the driveway, always trying to keep up with his brothers and goofing around with kids who would become lifelong friends.

He attended Ogden High School and graduated in 1964, where he excelled in basketball and golf. He served a mission for The Church of Jesus Christ of Latter-day Saints in the Canada Toronto Mission from 1965-67 and has been a faithful member throughout his life. He attended Weber State where he played collegiate basketball and golf and received his degree in political science with a minor in history.

Terry’s love for golf landed him his first assistant golf pro position at the White Barn in Ogden. In 1971 he moved to St. George and became the assistant pro, and then head professional, at Bloomington Country Club where he met his soon to be wife Shelley Peterson of Annabella, Utah. They married on July 31, 1975, in Honolulu, Hawaii, and later sealed in the Manti Temple. After a few years in St. George, they moved to Salt Lake City, where they welcomed their first son, Matt. They moved back to St. George in 1979 and welcomed their second son, Adam and their daughter, McCall four years later.

Terry was again the head golf professional at Bloomington Country Club, and Bloomington is where Terry and Shelley would raise their family. For many years after, nearly everywhere he went, he would run into a “member of the club” and say hello and shake hands. He eventually moved into the world of real estate in the mid-’80s and he was an integral part in helping develop and sell many areas and subdivisions around Southern Utah. He loved the friends he made and colleagues he worked with at Holiday Resort Realty, Sunbrook Communities, Sun River St. George and many others.

When not working you could always find Terry on the golf course, whether it was playing in a tournament, 18 holes or a golf trip with his buddies, 9 holes with his family, or chipping and putting with his grandkids. Terry joked about teaching a political science class because he loved keeping up on current events and politics. He enjoyed watching the news, reading the paper, and consuming history books while drinking lemonade.

He loved watching sports and always asked what time the game was on. If he wasn’t watching sports, it was an old western, the Andy Griffith show, or endless re-runs of Seinfeld. He enjoyed being around his family and attending all his grandkid’s activities up until he was physically unable. His great sense of humor and quick wit, even to the very end, left you laughing and with a smile on your face.

He is preceded in death by his parents Dale and Dayle Monson and his brother DeRay “Buggs” Monson.

Our family would like to thank the many doctors, nurses, family and friends for their love and concern for Terry and Shelley.

Funeral services will be Saturday, Dec. 17, at 11 am in The Church of Jesus Christ of Latter-day Saints, Bloomington 4th Ward Chapel, 3381 Mulberry Drive, St. George, Utah. Visitations will be held Friday evening from 6-8: pm at Metcalf Mortuary, 288 West St. George Blvd. and on Saturday prior to services, from 9:30-10:30 am at the church. Interment will be at Tonaquint Cemetery, 1777 South Dixie Drive, St. George, Utah.

Services will be streamed live via the Metcalf Mortuary website.