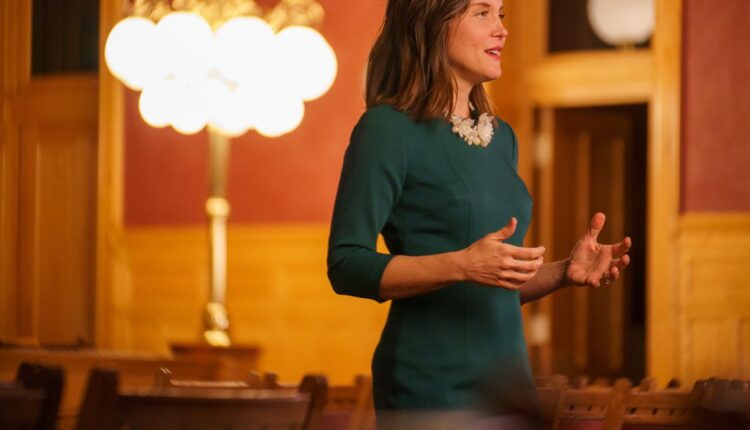 The mask mandate is working, but pandemic’s effects will be long-lasting

When Erin Mendenhall ran for mayor’s office in 2019, her campaign was largely shaped by a promise to purify Salt Lake City’s polluted air.

Now, nearing halfway through her first term, another public health issue has occupied much of her tenure: responding to the deadly coronavirus pandemic.

Its first budget saw significant cuts as the city prepared for the economic impact of forced closings and scaled-back shops. She then rallied to seek government aid for low-income families and those at risk of eviction. Spring brought vaccines and the mayor gave residents a message of hope. Then there were lackluster vaccination rates in the summer and a new spike in infections, prompting the mayor to quickly issue a school mask mandate before the fall.

When the mayor is beaten back by state lawmakers for relocation and other leaders who either gave in to public pressure or had their hands tied by the legislature talked to the Salt Lake Tribune about their pandemic response, concerns and priorities.

The conversation has been edited for length and clarity.

When you took office last year, you had an ambitious vision. Did you have to postpone any of your goals while the pandemic was in focus?

That was the purpose of our annual progress report card in late 2020, and we will repeat this analysis in late 2021. I thought this type of transparency was appropriate and necessary given the incredible amount of work it entails, which was not expected when I took office in January 2020, but fell upon our community with a pandemic and a number of other crises.

One example is a political idea that I carried through my campaign – the idea of ​​“Tickets for Transit”. This would be the first foray into the growth of our public transportation system by private investments by linking every ticket to a free ticket to and from an event in Salt Lake City, regardless of where you live in the system. The Church of Jesus Christ of Latter-day Saints was the first to raise its hand [partner], and their April 2020 general conference should be the first Ticket for Transit project. And then of course this conference did not take place in person and has not taken place since.

We are now dusting tickets for transit and re-evaluating how they could still be applied given the volatility and the continuation of the pandemic. But it’s one of the guidelines that had to be pushed back.

Were there any priorities that you had that now feel less and less achievable in the wake of the pandemic?

None of them fell off the table for us. In contrast, I think some of the needs in the community – homelessness is a good example – were both exacerbated by the pandemic and found federal funding that wasn’t in place. The city just received $ 87 million in US dollar bailout law, and as a city, we have invested more than $ 16 million in rental support over the course of the pandemic. For us, both mean an increase in the need and an increase in the financial capacity to make lasting investments in the support.

Do you think the end of the pandemic is still in sight or will you deal with it by the end of your term in office?

At the moment, the problems surrounding the pandemic are obviously continuing and, unfortunately, increasing. But the impact that will have on our community and our economy, and even on the future of built infrastructure in our city, will be sustainable.

How do you explain the mask debate to your own children? I wonder what it is like for her to see adults argue so passionately and publicly about it.

My background is in science and that probably has an impact on how I communicated with my children about the pandemic all along. We have nurses in our family who throughout the decades of their careers have wore masks to protect their patients and themselves. So it is not a new idea that we would wear masks to protect ourselves and others. In my conversations with my children, it wasn’t a political issue. They’ve been in local politics long enough that I think they know that there is a person for every opinion, and that doesn’t stop our families from wearing masks.

In your comment posted in The Tribune last month, you explained the legal rationale and need for your citywide mask mandate for schools, despite the fact that lawmakers passed a bill earlier this year that left that decision up to county officials (Salt Lake County Council opted for one Repeal). a nationwide school mandate from its own health department). You also noticed that your mask mandate was not intended to spark a dispute with the legislature. Are you afraid of retaliation anyway?

The legal foundations that the legislature created are not [include] Any restrictions on mayors across the state may be frustrating to some lawmakers, but this is the law they created. I’m closely watching the data our county dashboard shares on COVID cases across the county’s different school districts. And I hope lawmakers keep an eye on public health too [efforts] so that our children stay healthier and more in school than in districts that have not introduced a mask mandate.

It sounds like you’re confident the data shows the mandate has been effective and that could dampen legislature responses?

We see that in the first few weeks that the data is available. Whether or not lawmakers choose to focus on public health and the local data supporting masks in schools is out of my hands.

Do you feel like you have an ally in Governor Spencer Cox who has been looking into getting his own executive order mandating masks, or do you want him to do more?

I feel like I have a good relationship with Governor Cox as well as other leaderships as we communicate. We can agree to disagree, and although we make different decisions in our respective areas of responsibility, we can understand each other’s decision-making process.

However, I wonder if it’s frustrating for you to be one of the few elected leaders in Utah taking bold action to slow the pandemic?

I don’t think Salt Lake City is politically in a different place than we were before the pandemic started. We are a city with a democratic majority. We have long been the progressive leadership in the state. They continued to run our city by science and working with the data instead of letting political interests take the lead.

Do you have some highlights to share about where to invest the American Rescue Plan Act dollars?

No, I can’t yet, but I look forward to seeing you very soon.

It’s a lot of money. Can you explain why it takes so long to work through the red tape and decide where to spend it?

There are other instructions from the US Treasury Department. The details have seeped in since late spring, early summer. Also, any city, county, or state could look at ARPA funding and decide to run a thousand different, scattered projects that have piled up. I don’t want us to do that. We have other sources of funding, such as the Capital Improvement Program, to take this dispersed approach. Instead, we have thought about this investment on a scale that we have not been able to imagine for generations. In a way, I compare it to the Civilian Conservation Corps investment that our federal government made after the Great Depression in the 1930s. We want to make sure that we are doing the best we can to help our residents.

With COVID-19 cases increasing and we head into fall and winter, what keeps you up at night?

I wonder how the Utah residents who haven’t been vaccinated but may still be ready can be coerced.