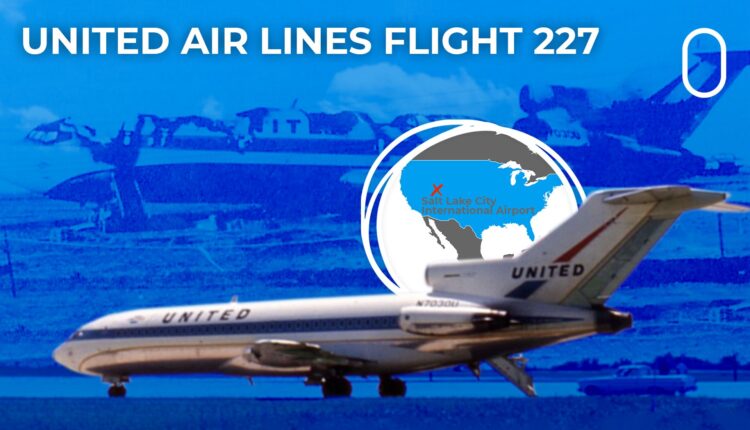 Exactly 57 years ago today, on November 11, 1965, United Air Lines Flight 227 crashed while landing in Salt Lake City, killing 43 of the 85 passengers onboard the plane.

SIMPLE FLYING VIDEO OF THE DAY

The aircraft involved in the crash was a nine-month-old Boeing 727-200 registered N7030U. In charge of the flight was Captain Gale C. Kehmeier, assisted by First Officer Philip E. Spicer and Second Officer Ronald R. Christensen.

In Denver, the new flight crew took control of the plane after an uneventful first three legs between New York and the mile-high city. For its next leg to Salt Lake City, Utah, the aircraft took off from Denver just after sunset at 16:54 and climbed to its assigned cruising altitude of 31,000 feet. At 17:38, the plane began its descent into Salt Lake City following the radar vectors.

At 17:47, Salt Lake City Air Traffic Control (ATC) advised the flight that they were five miles south of Riverton Fan Marker coming on the localizer course cleared for ILS runway three four left approach. The command pilot acknowledged the message: “Okay, we’re slowed to two fifty (knots), and we’re at ten thousand feet; we have the runway in sight now; we’ll cancel and standby with you for traffic.” At 17:49, the flight control was transferred to Salt Lake City Tower, which cleared the plane to land.

The plane was descending too fast

When the aircraft crossed the control marker, it was 2,000 above the glideslope and descending at 2,000 feet per minute. This was three times the United Air Lines recommended rate of approach for landings. The first officer tried to apply power to slow down the descent but was stopped by the captain. The captain then used thrust too late to stop the plane, landing 335 feet short of the runway.

The aircraft’s landing gear collapsed as the plane slid onto the runway. The impact of the landing had reputed fuel lines which were ignited by sparks from the fuselage scraping across the ground. Forty-three people died as a result of the ensuing fire.

The investigation into the crash of United Air Lines Flight 227

Following an extensive investigation, it was determined that the blame lay with Captain Gale C. Kehmeier. The final approach was too high and too close to the airport to perform a safe landing. The first officer who was flying the plane tried to apply thrust but had his hand brushed off the thrust leavers by the captain, who then took control of the flight.

The accident investigation by the CAB (Civil Aeronautics Board) revealed that the captain had a checked training history. He had failed his initial jet transition training and was made to continue flying Douglas DC-6s. Later, he also failed a routine instrument proficiency test.