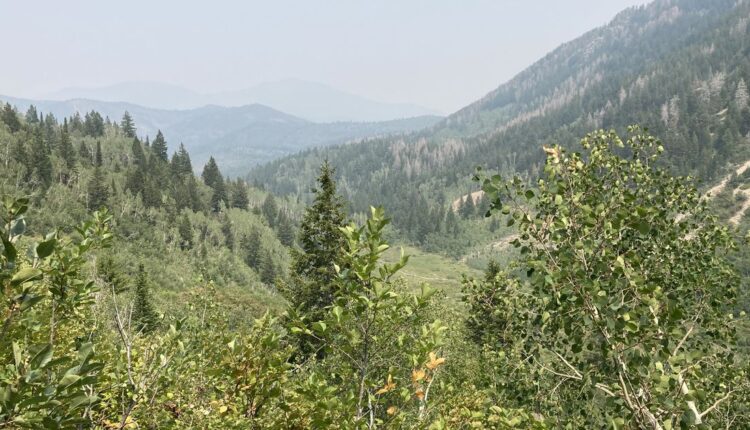 This Utah County hiking trail winds through Mount Timpanogos and is full of great views and hidden gems.

(Kelly Cannon | The Salt Lake Tribune) One of the views from a rest area on the Timpooneke Trail.

I wouldn’t say I like hiking. I even dare to say that I don’t like hiking. But I occasionally feel the attraction of nature to go outside. This is usually compounded by the fact that my blue heeler mix loves the outdoors. After a quick Google search for dog-friendly trails in Utah County, I found the Timponeeke Trail to Emerald Lake. It is one of many hiking trails on Mount Timpanogos, which is located in the scenic Uinta-Wasatch-Cache National Forest.

(Kelly Cannon | The Salt Lake Tribune) Tree cover is one of the nicer features on the Timpooneke Trail.

The path in its entirety is seven miles. I didn’t plan on driving 7 miles, just 1.5 miles to Scout Falls which is a good way to turn around. The starting point serves as the starting point for three different trails, with Timponeeke being the middle one.

A really nice aspect of this trail is the tree cover. I went in the early afternoon and was in the shade most of the time. There are a variety of trees including quivering aspen (my favorite). The path is mostly uphill and can be steep and stony in some places.

(Kelly Cannon | The Salt Lake Tribune) Honey, the dog shows the steepness of the Timpooneke Trail.

As a beginner hiker, my dog ​​and I could hike up at a relatively normal pace. We had to stop for water breaks but the view was worth the breaks. It wasn’t until we got home and started researching for this article that I realized the trail was considered “difficult” and “arduous” especially as you continue to Emerald Lake.

Part that I really loved were the little hidden gems I found along the way. My favorite was a small babbling brook that came up from the side of the mountain. With stones, branches and moss it looked like something out of a picture book.

(Kelly Cannon | The Salt Lake Tribune) A babbling brook on the mountainside is one of the hidden gems of the Timpooneke Trail.

We managed to reach Scout Falls. I’m sure it’s a nice little waterfall when Utah isn’t in the middle of an extreme drought. The view from the falls were lovely too, though I’m sure it’s even better if there isn’t a California wildfire smoke blanket.

(Kelly Cannon | The Salt Lake Tribune) One of the views from a rest area on the Timpooneke Trail.

The Hike: The trail to Scout Falls is approximately 1.5 miles and provides a good place to turn back for a shorter hike. For the more adventurous, the hike takes a total of 11 km to Emerald Lake. It gets very rocky and steep as you walk past Scout Falls.

The path is very clear and precise, with lots of foliage and good places to pause and catch your breath. We saw many other people walking the opposite path from us, but we were alone most of the way. Horses are also allowed on the trail, although we didn’t encounter any.

How to get there: There are two ways to enter the path. If traveling north on I-15, take Exit 272 Orem 800 North and continue to the mouth of Provo Canyon. Turn left on Highway 189 Provo Canyon Scenic Byway. Then turn left on Highway 92 Alpine Scenic Loop / Sundance. Stay on the road until you reach the Timpooneke Trail parking lot.

Since you can access the trail from either end of Highway 92, we took American Fork to get there and Provo Canyon to head back down for a leisurely ride.

Time: 3 hours, but we are beginners

Dogs allowed: Yes, on a leash

Toilets: Yes, at the starting point

(Kelly Cannon | The Salt Lake Tribune) Honey, the dog is taking a break on the Timpooneke Trail.