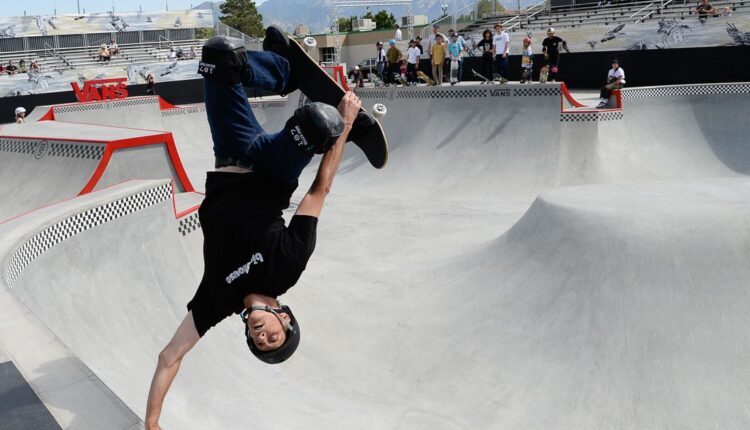 “I feel like we’re going to make enough noise with this event that the IOC can’t ignore it.”

(Francisco Kjolseth | The Salt Lake Tribune) Skate legend Tony Hawk delights the crowd with an invert as he joins other pro skaters for a community skate during a first look of the new Vans – Utah Sports Commission Skatepark at the Utah State Fairpark on Tuesday, Sept 3, 2019. The skatepark has a street course, but Hawk brought his inaugural Vert Alert halfpipe event to the Fairpark last year and plans to return in August 2022.

If Tony Hawk gets his way and Paris 2024 organizers add vert skateboarding to the Olympic program for the first time, Utah should at least get a mention in the historical footnotes.

Hawk had been trying for years to create a vert skateboarding series, a critical step to the discipline — basically halfpipe skating — becoming an Olympic sport. But he didn’t have much luck until last year, when the Utah Sports Commission offered to host the inaugural Tony Hawk Vert Alert at the Utah State Fairpark.

This year the Vert Alert added a stop in Las Vegas in addition to a return to Salt Lake City in August. And Hawk within two years has his eyes on getting the high-flying sport into millions of people’s homes as part of the 2024 Summer Games.

“We’re trying to make it a series. We want to make it international,” Hawk said Thursday at the commission’s State of Sport awards at Vivint Arena. “And… I do feel like there’s a serious omission in skate competitions with the halfpipe skating and I’m just thankful that now we have a spark to start that off and off we go.

“I feel like we’re going to make enough noise with that event,” he added, “that the IOC can’t ignore it.”

Hawk’s Vert Alert was honored as the 2021 Event of the Year. It was held last summer alongside the first Street League Skateboarding Championship Tour event of the season. The Street League competition featured Nyjah Huston, Rayssa Leal and many of the athletes who competed when skateboarding made its Olympic debut in Tokyo in July. Those games only featured the street discipline.

(Francisco Kjolseth | The Salt Lake Tribune) Rayssa Leal of Brazil competes in Street League Skateboarding Championship Tour at the Utah State Fairpark in Salt Lake City on Saturday, Aug. 28, 2021. Now in its 11th year, the sport’s premier competition series includes more of the world’s best skaters than ever before, with the tour roster featuring 47 athletes hailing from 11 countries, including 21 Olympians and multiple X Games medalists.

Street skateboarding takes place on a course that resembles a park or plaza, with rails, stairs and benches. Vert skateboarding is the older cousin of halfpipe snowboarding, with athletes trying to get as high off the lip of a ramp as possible while also performing flips and twists.

Hawk said he was “proud and thankful that skateboarding is finally included in the Olympics.” But, he also struggled with the exclusion of vert skating, which is at the root of halfpipe snowboarding. Halfpipe was one of two disciplines showcased when snowboarding made its Olympic debut in 1998.

“I feel like halfpipe vertical skating is such a staple of skateboarding. And it is where most of the sort of gymnastic elements and high-flying stuff goes on,” Hawk said. “And to see that the highlights from the Tokyo Games were the vert tricks being done on the park course, I was like, ‘Why don’t we have vert?!’”

So, he’s setting out to change that. And it starts with Vert Alert.

“I feel like we’re going to make enough noise with that event,” Hawk said, “that the IOC can’t ignore it.”

Hawk said representatives of the Utah Sports Commission, which was established in 2012 to promote bringing sporting events to the state, approached him while he was attending a Vans Park Series event at the Fairpark before the pandemic.

Hawk, who recently appeared on stage at the Academy Awards alongside snowboard Shaun White and surfer Kelly Slater, still skates. He dropped in during the event in Salt Lake City last summer as part of a “Legends Demo.” He’s hoping to participate in that again this summer even though he broke his femur last month — while skating — and was walking with a cane at the State of Sports awards ceremony.

Still, he does not plan to be on the list of competitors in Paris.

That doesn’t mean he won’t be on the ramp, though. Even on the street course in Tokyo, Hawk couldn’t resist sneaking in a session.

“I did go rogue and dropped into the skate park without permission,” he said, “like a skater would.”

The annual State of Sports awards ceremony featured an estimated 50 past and present Olympians. They included speed skater Erin Jackson and skier Alex Hall, who won the female and male Olympic Athlete of the Year awards, respectively.

Tony Finau was named Pro Athlete of the Year, while Kyle Whittingham and the Utah football team were named Coach and Team of the Year.

The Lewis Feild Memorial Award for the state’s top cowboy went to Stetson Wright and mountain biker Tom van Steenbergen had the Highlight of the Year.

Welcome to the UFC: Trey Ogden