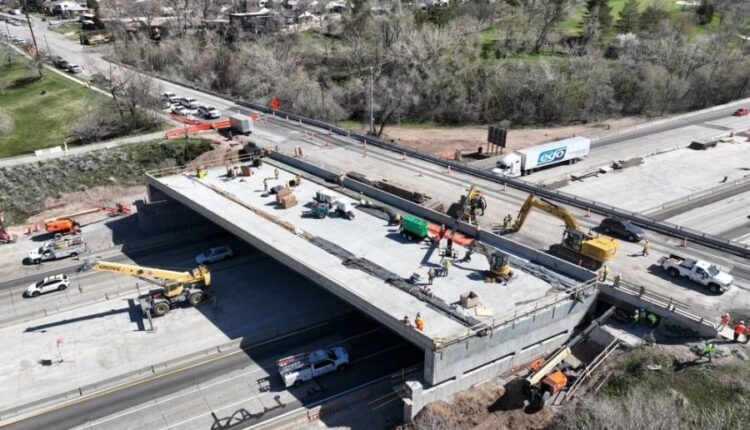 UDOT Crews Kick Off Most Impactful Projects of 2022 : CEG

Crews from the Utah Department of Transportation executed a new bridge slide over I-80 during the weekend of April 8, 2022. Construction crews constructed the new bridge next to the existing bridge, an innovative method of bridge construction pioneered in Utah.

The Utah Department of Transportation (UDOT) officially launched the 2022 construction season with a bridge slide over I-80, marking one of the bigger construction projects slated for this year — the new 1700 East Bridge — in the Beehive State.

During this closure, crews demolished the 1700 East bridge over I-80 and slid a new bridge — which was constructed next to the existing bridge — into place. This innovative method of bridge construction, pioneered in Utah, reduces delays and traffic restrictions for drivers. 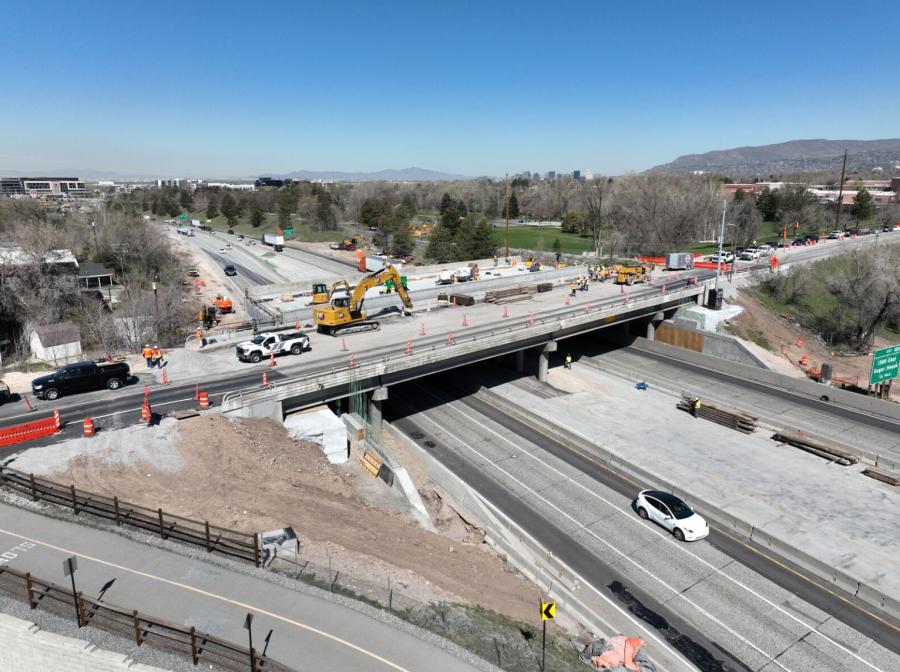 The 1700 East bridge was originally built in the 1960s and was due for replacement. The new bridge will provide a smoother ride for drivers and will enhance safety for cyclists and pedestrians, with a new 14-ft.-wide path on the west side along with a new sidewalk and bike lane on the east side.

The project is one of 175 under construction in 2022, with a total value of $2.5 billion. The projects are focused on meeting current and future transportation needs in Utah — one of the fastest-growing states in the country — while keeping existing roads, bridges, sidewalks and trails in good condition.

Other projects that construction crews will start or have already started include:

UDOT is building a new 16-mi., four-lane divided highway through western Davis County between I-15 in Farmington and the future extension of SR 193 in West Point. Six new interchanges will provide access to Farmington, Kaysville, Layton and Syracuse. The project also includes more than 10 mi. of new trails. Construction began in 2021 and is scheduled to be finished by 2024.

UDOT is widening US 89 from four lanes to six and removing stoplights between SR 193 in Layton and Main Street in Farmington. The project includes four new interchanges and two new bridges over the highway, along with new frontage roads, pedestrian underpasses, a multi-use trail and bicycle improvements. Construction began in 2020 and is slated to finish in 2023.

This project will reconstruct and widen SR 30 in Cache County from the SR 23 junction near Mendon to 1000 West in Logan. The project also will include a new pedestrian underpass at SR 23. Construction starts this spring and is scheduled to finish in 2023.

UDOT is removing the existing pavement and replacing it with new concrete on I-80 from 1300 East to 2300 East and I-215 from 3300 South to 4500 South. Crews also will add a new eastbound lane to this section of I-80, and will replace or widen four bridges — including the 1700 East bridge that was most recently demolished. Construction began in 2021 and all lanes on the project are scheduled to be open by the end of 2023.

This project will add a new northbound lane from 6200 South to the I-215 interchange and rebuild the 6200 South intersection to add a new continuous flow left-turn to the northbound lanes. Crews also will add lanes and ramp meters to the eastbound and westbound I-215 on-ramps. Construction will start later this year and is scheduled for completion in fall 2023.

This project will build a new interchange between 400 South (SR 77) in Springville and Main Street (SR 156)/US 6 in Spanish Fork. Crews also will widen 1600 South/2700 North from Spanish Fork Main Street to SR 51. Construction will start later this year and the project is scheduled for completion in 2025.

UDOT is replacing sections of old pavement between the junction with SR 32 and the Wasatch/Summit County line and replacing the bridge driving surfaces over the Provo River. Construction started this spring and is scheduled to finish by 2023.

UDOT is replacing sections of guardrail in Provo Canyon with new concrete barriers, and adding rumble strips to a section of US 40 from 800 North in Heber to the intersection with SR 32. Construction began in 2021 and is scheduled to finish this fall.

This project will improve approximately 30 mi. of US 40 between Soldier Creek (near Strawberry Reservoir) and Duchesne. Work will include crack sealing, asphalt repairs, the placement of a new road surface (chip seal) and road sign updates. Construction on this project will start this spring and end this summer.

This project will repave three sections of I-15 from Beaver through Cedar City and replace the driving surface and barrier walls on the I-70 bridge over I-15. Construction starts later this spring and will continue through fall.

This project will construct a new 2.5-mi. southbound passing lane on US 191 just south of the I-70 junction. Work also includes repaving the highway from north Moab to the SR 313 junction and from south Moab to the La Sal junction (SR 46). Construction will start later this summer and is scheduled to be finished by 2023.

This project will build a new 2-mi. eastbound passing lane in Cedar Canyon east of Cedar City and repave several miles of the highway farther east in Kane County. Construction is scheduled to begin this summer and end in 2023.