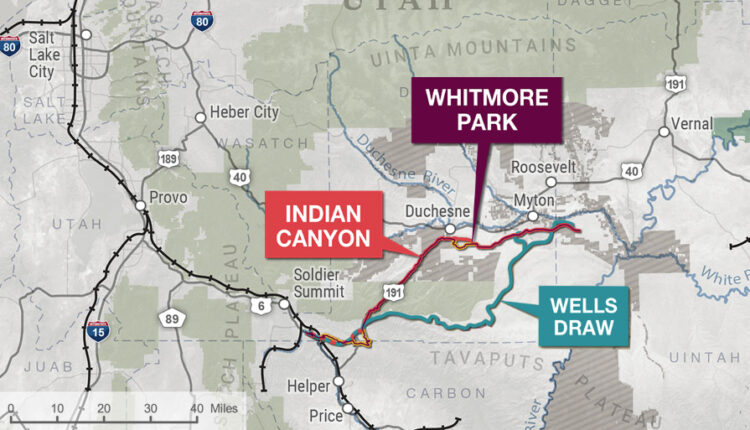 The preferred alternative route of the Uinta Basin Railway (marked in red) would connect the Uintah Basin in eastern Utah to existing interstate railroad connections in central Utah. The US Forest Service gave its approval to that right of way on July 14.

PORTLAND, ME – The US Forest Service has granted approval of a railroad right of way to link the Uintah Basin to the existing interstate rail network in central Utah.

gov. Spencer Cox announced and applauded the Forest Service decision on July 14 at the summer meeting of the National Governor’s Association in Portland, ME.

“This is a huge victory that will get Utah energy to market fastermore cleanly, more safely and will help the economy of eastern Utah,” Cox said.

The proposed Uintah Basin Railway is an 88-mile single-track rail line that will connect the Uintah Basin in eastern Utah to the interstate rail network in central Utah.

The preferred alternative route proposed by local officials would extend from two terminus points in Uintah County near Myton and Leland Beach to a proposed connection with the existing Union Pacific Provo subdivision near Kyune, Utah.

Approval of the railway was held up by environmental concerns because approximately 12 miles of the preferred right of way crossed federal land in the Ashley National Forest.

“State and local governments, the Ute tribe, energy producers and rail companies have been making the argument for decades that improved access to the outside world will help the (Uintah) Basin diversify its economy,” Cox explained. “Without a doubt, this infrastructure will improve economic opportunities for individuals, families and businesses.”

The Uintah County Railway is a proposal by the Seven County Coalition in eastern Utah. That group – comprised of officials from Carbon, Daggett, Duchesne, Emery, San Juan, Sevier and Uintah counties – was formed in 2014 to promote regional planning, increase economic opportunities and implement sustainable infrastructure projects.

“The Uintah Basin Railway will be important to Utah’s economy and rural Utah’s ability to diversify their economic streams,” according to Sen. J. Stewart Adams, president of the Utah Senate.

The Uintah Basin lies in the northeast corner of Utah. It is bounded on the north by the Uintah Mountains, on the south by the Tavaputs Plateau, on the west by the Wasatch Range and on the east by elevated terrain that separates it from neighboring Colorado.

The Uintah Basin is rich in natural resources including hydrocarbons, phosphates and other minerals critical to America’s economy. It is, however, one of the largest areas of the western United States without rail or interstate highway connections or major airport service.

Without those connections, Cox said that Duchesne and Uintah counties have been at a major competitive disadvantage when trying to attract business investment and residents have had very limited employment prospects.

“We’re excited to see the potential of this region unleashed,” the governor added.