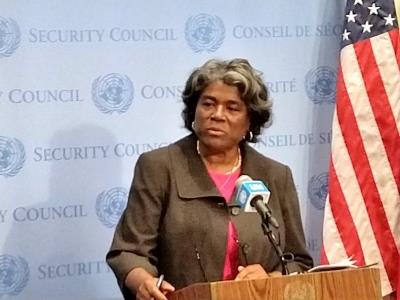 Washington, Nov 5 (IANS) The US called on the UN Security Council (UNSC) to hold North Korea accountable for its recent provocative actions that included the launch of an intercontinental ballistic missile.

US Ambassador to the UN Linda Thomas-Greenfield on Friday also stressed the importance of fully implementing the existing UNSC sanctions on the recalcitrant country, Yonhap news agency reported.

‘Over the last week and a half the DPRK has exacerbated an extremely worrisome trend that we’ve seen all year; an increasing number of (missile) launches in flagrant violation of the Security Council Resolution, destabilizing and threatening rhetoric and continue escalation,’ the US diplomat said at an emergency meeting of the Security Council held in New York.

‘The United States condemns, in the strongest possible terms, all 13 recent DPRK ballistic missile launches since October 27, but the DPRK’s latest test of an intercontinental ballistic missile, the seventh ICBM this year, is particularly concerning,’ she added.

The previous eight meetings, however, ended in naught, primarily due to opposition from Russia and China, both veto power-wielding permanent members of the Security Council and close neighbors of North Korea.

Thomas-Greenfield argued Beijing and Moscow have made a mockery of the Security Council by bending over backwards to justify Pyongyang’s repeated violations of UNSC resolutions that they had helped to put in place.

‘I want to remind this council of our responsibility to protect global peace and security, defend a global nonproliferation regime and uphold the Security Council resolutions,’ she said.

‘You don’t get to abandon the Security Council responsibilities because the DPRK might sell you weapons to fuel your war of aggression in Ukraine or because you think they make a good regional butter to the United States,’ added the US ambassador.

The US earlier released intelligence information that Pyongyang is trying to ‘covertly’ send a significant number of artillery shells to Russia for use in Ukraine.

Thomas-Greenfield said that the North has now launched 59 ballistic missiles in total this year.

‘For a UN member state to so flagrantly violate the Security Council resolutions and all that the UN Charter stands for is appalling,’ she said, referring to North Korea’s missile launches. ‘Equally appalling is the council’s deafening silence on this issue.’

China and Russia refused to budget, instead accusing the US and South Korea of ​​provoking North Korea’s recent missile launches.

‘The current events and root causes that have led to the current situation on the peninsula are clear to all. The DPRK’s recent launches activities did not happen in isolation and they are directly linked to the words and deeds of relevant parties,’ China’s envoy to the UN Zhang Jun said in the council meeting through an interpreter.

Russia’s envoy to the UN joined in accusing the US of instigating North Korea’s recent missile launches.

‘We note with regret that recently the situation on the Korean Peninsula has significantly worsened,’ said Anna Evstigneeva, deputy permanent representative of Russia to the UN

‘The reason for this is clear; the desire of Washington to force Pyongyang to unilaterally disarm by using sanctions and exerting pressure and force,’ she added, speaking through an interpreter.