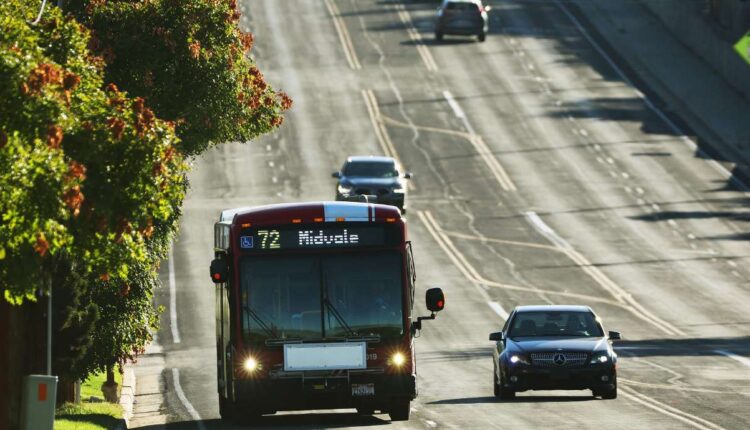 UTA ridership is slowly recovering. Here’s its plans for the next 5 years

SALT LAKE CITY — Jay Fox is done comparing Utah Transit Authority’s current ridership with where it was before the COVID-19 pandemic.

Fox, the agency’s director, offered one last comparison during a meeting with municipal elected leaders last week before noting that UTA will focus more on growing existing services. Total ridership, which immediately dropped at the onset of the pandemic-related shutdowns in the spring of 2020, has returned to about 75% of pre-pandemic ridership levels.

“We’re going to be talking about growth moving forward and not comparing ourselves to what we were in 2019,” he said, adding that many of transit services figures are well ahead of the national average in terms of ridership recovery.

Fox made those remarks during a UTA Local Advisory Council meeting held last week. Members of the council, including Salt Lake City Mayor Erin Mendenhall, Draper Mayor Troy Walker and Vineyard Mayor Julie Fullmer, voted in favor of UTA’s new $1.3 billion five-year capital plan during the meeting. The plan is set to be voted on by the agency’s board of trustees in the near future.

The council also received a presentation about UTA’s plans for new growth in the near future. The agency is required to update its five-year service plan every two years. The current plan was revealed in 2020 and is set to be revised in the coming months.

Eric Callison, UTA’s manager of service planning, offered the council a detailed breakdown of what’s in the works for the latest update. He explained that the plan takes the agency’s long-range plans, other state or local transportation plans, customer feedback and other datasets to compose a list of new service routes or plans.

But, in essence, the list offers a window into the types of expansions that are possible with the revenue, funding and resources that UTA has.

That’s because there are constraints, especially now as the agency deals with staff shortages that are severe enough that it will pull back on some of its services beginning next month. Agency officials say working to hire and maintain workers is also a high priority as it moves forward with future plans, including its proposed 2023 budget.

“If we have a better idea of ​​what the laboratory environment is two years from now, things could move forward or backward in the plan. This is just our best understanding right now,” Callison added, about some of the projects included in the five – year plan.

Major changes tend to begin when UTA holds its August change days. The next August change is currently projected to have some big changes to bus and TRAX service. Callison said these are plans that UTA is “pretty sure about” at the moment:

Callison also unveiled changes that are possible in the five years. Some of the projects could begin as early as 2023, but that will be determined by whether they have enough employees to drive the buses. The additional plans include:

Callison also highlighted other longer-term projects that UTA would “like to do” in the near future but can’t for various reasons. Nichol Bourdeaux, the chief planning and engagement officer at UTA, explained that the items are in the agency’s 30-year plan but are highlighted in the five-year plan to keep them in the forefront of future planning discussions.

These long-term vision plans include:

Megan Waters, UTA’s community engagement director, said the document will go through a public comment period by the end of the year. The document will receive some revisions before it’s finalized. The process is currently projected to be completed in February 2023.

UTA is also working on a 30-year plan, which would further describe projects that are possible by 2050.

While there weren’t many individual projects discussed in the long-term plan, Callison noted during last week’s meeting that it’s also possible that UVX service could be expanded west to the Provo Airport. However, he clarified that it’s more of a contingency idea that will depend on certain factors, including the possibility that The Church of Jesus Christ of Latter-day Saints uses the Provo Airport instead of the Salt Lake City International Airport for future missionary travel.

Other odds and ends

The UTA Local Advisory Council also voted in favor of a new $1.3 billion five-year capital plan during last week’s meeting, despite opposition from Riverton Mayor Trent Staggs, who has voiced concerns with the lack of new projects in the growing southwest quadrant of Salt Lake County.

UTA funds account for about $502.7 million of the proposed capital budget over the next five years, while the rest is forecast to come from grants, leases and state/local partners.

Prior to the vote, Cottonwood Heights City Councilwoman Ellen Birrell, serving as an alternate for the meeting, read a lengthy statement prepared by Staggs, as he was unable to attend the meeting. Staggs’ statement mirrored his complaints before the meeting, arguing more should be done to boost transit in the southwest portion of the county.

UTA officials explained that they use something called a transit propensity index to weigh new projects. It’s an equation that takes factors like density, low-income populations and street connectivity into consideration when coming up with plans.

“Fixed-route is oftentimes a difficult solution when you don’t have a densely-populated area,” Fox said, noting that any fixed-route bus service away from high-density areas often requires park-and-ride options because not enough people live close to the actual bus route.

Microtransit has turned into a simple solution to this problem, offering bus-like service to less dense areas of the Wasatch Front, Fox said. He and other officials added that UTA on Demand is a better option because it offers a “bus stop on every corner.” This is why the agency is looking to expand the option to other areas in the coming years.

Meanwhile, the UTA board of trustees has the final vote on the capital plan along with the 2023 budget. Those votes are expected in the near future.