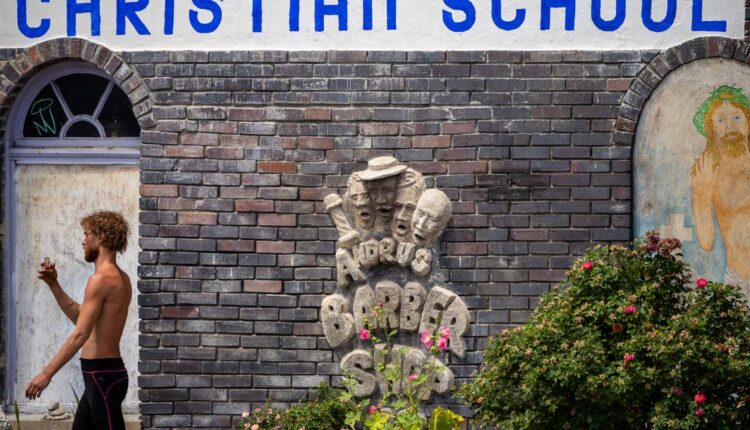 Artist Ralphael Plescia, who spent a half-century filling a Salt Lake City building with his unique sculptures and paintings depicting passages from the Bibie, has died.

Plescia died Aug. 14 in Salt Lake City, according to an obituary released by Larkin Mortuary and by family members. He was 84. No cause of death was mentioned.

Plescia’s death leaves the fate of his most notable work — the two-story personal sculpture garden he called Christian School — in doubt.

In the Christian School, at 1324 S. State St. in Salt Lake City, Plescia created sculptures there for some 50 years, starting in 1970, based on his interpretations of Bible passages.

“It is like a museum,” Plescia said in a 2016 video produced by OHO Media, the arts publication 15 Bytes and KUER’s VideoWest. “But it’s a museum that’s a school.”

The Atlas Obscura website, which chronicles offbeat landmarks, notes that the building contains “huge, larger-than-life statues of Eve and the serpent in the garden, the lion of Judah, dragons, Heavenly Mother and other figures [that] emerge from the very floor.”

Plescia’s art, the Atlas Obscura entry continues, ranged from a brightly lit dome in the building’s top floor, with a Sistine Chapel-like painting of God on the ceiling, to a hand-dug hole in the basement, “deep enough to reach the water table,” that shows “concrete statues of desperate souls” trying to escape the pit.

Plescia’s wife, Rae, said in the 2016 video that her husband started on the Christian School in 1970 — the same year his grandmother died. Within a few months, Rae said, his sister, his dad and their youngest daughter, Maria, also died.

When another daughter, Tammy, died in 2009 of an aneurysm, Plescia was devastated, his wife said in the video. “The loss has really made him think about things more deeply,” Rae said.

The art preservation website Spaces Archives, wrote that the work in his Christian School was inspired by the 12th chapter of the Book of Revelation. That chapter describes a pregnant woman confronted by a seven-headed dragon preparing to devour the woman’s child when it is born. Plescia’s sculpture shows the boy, usually interpreted to be Jesus, and his mother — referred to as “The Lady of Wisdom” — escaping to the wilderness, more specifically hiding inside the mouth of a lion.

It was lions that first brought Plescia recognition in the Utah art world. Plescia was hired by the state of Utah in 1976 to restore and repair the lion statues mounted at the side entrances of the Utah State Capitol.

The original lions, created by Gavin Jack in 1916, were made of cement, and by the ’70s had been badly damaged by weather, said Stephanie Angelides, a curator at the Capitol Preservation Board.

“Self-taught with no formal sculpture or restoration training, he studied lions through books and observed them during visits to Hogle Zoo,” Angelides said. “He not only repaired them, but altered them to make them more anatomically correct.”

Plescia was honored with a resolution by the 1977 session of the Utah Legislature, which cited his efforts in “restoring the magnificence to the pride of lions which grace the East and West entrances to the Utah State Capitol building.”

Plescia’s lions lasted until 1998, when they also became weather-damaged. New lions, made of marble, replaced the old ones during the Capitol renovation that ran from 2004 to 2008.

Ralphael Plescia was born on Dec. 20, 1937, to Theodore Plescia and Hortense Beryl Blake. He married Vonne Rae Polad in 1956, and they raised four children.

As a child, according to Spaces Archive, Plescia would play in the Gilgal Sculpture Garden, and watch the mason Thomas Child build the sculptures that depicted aspects of his faith — such as the famous Joseph Smith sphinx.

Gilgal Garden lay fallow for years, before it was restored and reopened as a public park in 2000. The fate of Plescia’s Christian School is less clear with the artist’s death.

Kirk Huffaker, the former director of Preservation Utah, said Thursday that he was involved with saving Gilgal, and noted that places like Allen Park (near Westminister College) and Plescia’s school are “the next step in saving important and untrained art in Salt Lake City .”

“All of these have important sorts of literary or religious folk life, [they’re] regular people’s interpretations of religion or art, and are important in terms of what they represent,” he said.

Plescia, with his Christian School, “really created a space within the building that fit the art that he wanted to do, which is very unique and makes it inseparable from the place that it is,” Huffaker said. “Taking it out of there would not have the same context and significance being placed somewhere else.”

Huffaker said that Plescia jokingly called it a Christian school, but his goal was to educate people on his views and perspectives of religion. “It was kind of his personal school about Christianity,” he said.

Rae Plescia said in the 2016 video that the Christian School building goes to the Shriners Children’s Hospital after his death. The Plescias had been leasing it from the Shriners hospital, which is still the building’s owner, according to the Salt Lake County Assessor’s Office.

In the 2016 video, Huffaker — when he was still with Preservation Utah — said the building, because of its prime location on State Street, could be a target for redevelopment. Looking back, Huffaker said Thursday, the video was meant to “rally support behind him to maybe purchase the building.”

Huffaker, who is now a consultant to preservation groups, said that “even if [the building] gets donated to someone like a nonprofit, giving guidelines are such that they need to monetize that donation with real property, stock or whatever comes in as quickly as possible.”

In 2016, Plescia had his doubts about whether Christian School would last beyond his life. “The reason I don’t think it’ll survive,” he said in the video, “is because what I’m doing here is not something to make money on. I’m not trying to sell anything other than knowledge.”

“When I’m dead and I’m gone, whatever I did — if it’s shoved under the rug — at least I tried to do what I thought was right during my lifetime,” Plescia said in the video. “And if it’s dead and gone, that’s not my fault.”

Plescia is survived by his wife, Rae; his daughter, Neena Plant-Henniger, and her husband, Martin; his son, Phillip Ralphael Plescia, and his spouse Terry; son-in-law Russell Rolfson; 10 grandchildren and 16 great-grandchildren. His siblings — Teddy, Sylvia and Rose — and two daughters, Tammy and Maria, died previously.

Funeral services were held Wednesday, Aug. 24, according to Larkin Mortuary.

Meet the 2 new members of the Primary general advisory council