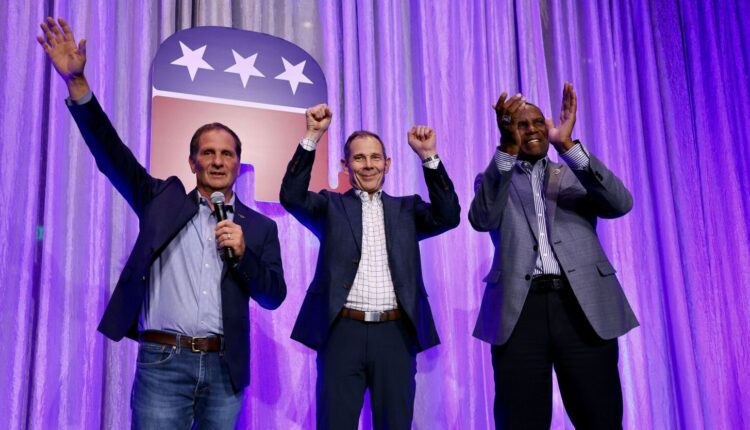 “Serving Utah’s First District in Congress is a privilege, and I am grateful for the opportunity to return for a second term to continue bringing Utah’s values ​​to Washington,” Moore said in a statement following Tuesday’s results.

“As hardworking families struggled with historic inflation, skyrocketing energy costs, increasing crime, and weak immigration policies, I am more resolved than ever to double down on the Biden administration’s failed approach to our most pressing challenges,” he said. “My congressional colleagues and I will hold the administration accountable and deliver on legislation to support our families, workforce, and next generation.”

One of Utah’s two freshmen congressmen, Moore currently serves on the House Armed Services and Natural Resource committees. He was elected in 2020 after former Rep. Rob Bishop vacated his seat after 17 years.

Rep. Blake Moore, the incumbent congressman for Utah’s 1st Congressional District, speaks with John and Linda Boyer of North Ogden at a Republican watch party in Ogden on Tuesday, Nov. 8, 2022.

He co-sponsored several bills including the Modernizing Access to Our Public Land Act, which digitized maps showing access to federal land, and the Accelerating Access to Critical Therapies for ALS Act, aimed at expanding access to investigational drugs. Both were signed into law.

He highlighted public land policy and supporting Hill Air Force Base, one of the state’s largest employers located in his district, as priorities in his second term.

“I will continue to put productivity over partisanship to support Hill Air Force Base, promote thoughtful stewardship of our public lands, and reverse Washington’s debt culture. My team and I are looking forward to building on our successes and fighting for Utahns in the 118th Congress,” he said.

The 1st Congressional District used to encompass much of eastern Utah’s oil rich Uintah Basin and the Ute Indian Reservation. However, it was redistricted to now only include the northernmost part of the state.

Moore worked as a foreign service officer with the US Department of State and as an executive with the Cicero Group.

Utah Rep. Chris Stewart had 63.6% of the vote, holding a comfortable lead over his opponent Nick Mitchell who, as of Tuesday evening, had 30.4%. Jaymac Mcfarland with the United Utah Party had 3.3%, while Cassie Easley with the Constitution Party had 2.5%.

“We’re excited. It’s a good night, I think, for Republicans,” Stewart said. “… We can do some things we’ve been anxious to do for a long time now. It’s been hard to be in the minority.”

Stewart said a major goal will be to control federal spending, echoing a common sentiment Tuesday night among Republicans, though he cautioned it won’t happen overnight. 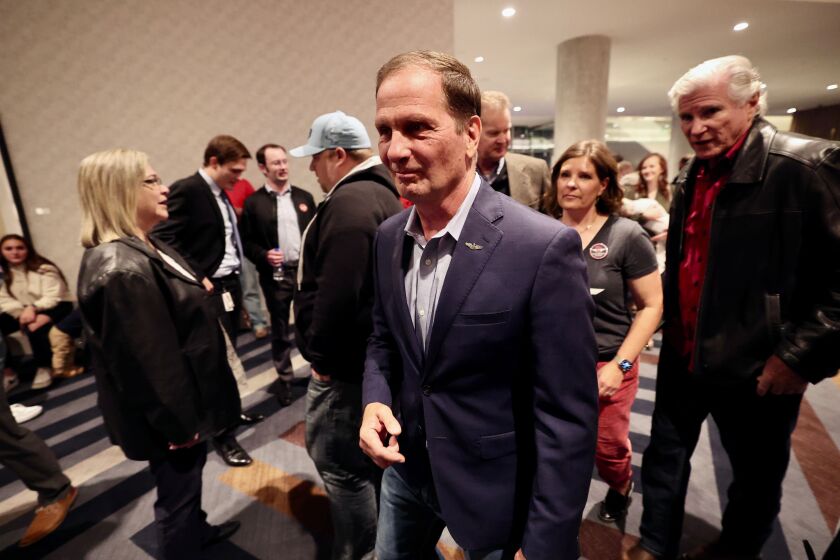 Rep. Chris Stewart, R-Utah, talks with people in the crowd at an election party at the Hyatt Regency in Salt Lake City on Tuesday, Nov. 8, 2022.

“The spending bills will be one of the first priorities. … One hundred percent of the inflation right now is caused by our government’s spending. We can pull that back on the Appropriations Committee where I sit, but it’s going to take time, we’re not going to be able to fix that by the weekend,” he said.

Stewart will enter his sixth term serving Utah’s 2nd Congressional District, first taking the seat in 2013. He served in the US Air Force from 1984 to 1998 before becoming a business owner and author.

Stewart said bills aimed at easing the mental health crisis will be a priority in his next term, in addition to added oversight to the Department of Justice.

“Did you know you can buy suicide kits on Amazon? They actually send kids a kit that will help them kill themselves … so we want to outlaw that,” he said. “There’s some things on intel we want to do that will break down some of the laws with the FBI and the Department of Justice.”

Mitchell describes himself as an inventor and scientist. He also attempted to challenge Utah Sen. Mike Lee, but did not appear on the 2022 primary ballot.

Rep. John Curtis, R-Utah, talks with people in the crowd at an election party at the Hyatt Regency in Salt Lake City on Tuesday, Nov. 8, 2022.

As of Tuesday evening, Utah Rep. John Curtis appears to be headed toward another term in Congress, with about 67.2% of the vote compared to his opponent Glenn Wright’s 27.3%. Libertarian Michael Stoddard had 2.5%, Daniel Clyde Cummings with the Constitution Party had 1.4% and Aaron Heineman with the Independent American Party had 1.3%.

Speaking from the Utah Republican Party’s watch party in Salt Lake City, Curtis said he’s ready for the election to be over so the GOP can set their sights on having control of the House.

“Everybody’s obviously really focused on the economy on inflation, energy prices, that’s a big emphasis on mine and I think the party’s going to move quickly to bring some relief,” he said.

Curtis was elected in 2017 in a special election to replace former Rep. Jason Chaffetz, and currently sits on the House Committee on Energy and Commerce. He’s branded himself as a “climate conservative,” establishing the Climate Conservative Caucus and attending the United Nations’ climate change summit. He also co-sponsored the Accelerating Access to Critical Therapies for ALS Act.

GOP control of the House means a more practical approach to combating climate change, Curtis says. That includes a focus on mining critical minerals for renewable energy and energy independence.

“There’s too much emphasis on what feels good and not what works. They’re very quick to tell us to follow the science but they themselves are not following the facts on this,” he said, pointing to the bipartisan Inflation Reduction Act as an example. “They put (electric vehicle) charging stations all over the country, yet we don’t have the grid to supply that.”

Curtis noted that Congress can pass climate change legislation while reeling in federal spending and freeing up the supply chain in an effort to fight inflation.

“Let’s start with less spending. … Inflation is a result of too much spending and not enough goods, so on a federal level what we need to do is peel back the spending and open up the supply chains,” he said.

A former executive and partner at Action Target Company, Curtis served as Provo mayor from 2010 to 2017.

Curtis’ district spans all of eastern Utah, including parts of Sandy and Cottonwood Heights, Park City, Vernal, and running all the way south to Moab and Blanding. It also encompasses Provo, where Curtis was mayor. The district grew in size, absorbing the Uintah Basin after the Utah Legislature’s redistricting process. Rep. Burgess Owens, R-Utah, talks with people in the crowd at an election party at the Hyatt Regency in Salt Lake City on Tuesday, Nov. 8, 2022.

Utah’s other freshman congressman, Rep. Burgess Owens, is poised for a second term after holding on to 60.8% of the vote as of Tuesday night. Democrat Darlene McDonald had 32.8%, while United Utah Party candidate January Walker had 6.2%.

“We’re excited about where we are because the American people have made a statement. We’re ready to get back to normal, which is the American dream — to have safety, to have low cost of gas, low cost of food, to dream outside the box. And the only way to do that is to give the Republican party control,” he said Tuesday evening.

“We shut down the borders, we stop spending money we don’t have, that’s what causes inflation, become energy independent once again. There’s so many things we’re going to do that are just common sense,” he said.

Owens is a former NFL safety who played for the New York Jets and Oakland Raiders before becoming an author and Fox News contributor.

He beat one-term Democratic Congressman Ben McAdams in 2020. He currently serves on the House Judiciary, Education and Workforce committees, and says he’s eyeing a spot on the Transportation and Infrastructure Committee.

“We’re the fastest growing state in the last 10 years, we need to make sure we get our infrastructure together. We could be the pilot state,” he said.

The GOP’s hold on the once-purple 4th Congressional District tightened after the Utah Legislature’s redistricting process, where its boundary was moved south out of South Salt Lake and Millcreek and into central Utah towns like Ephraim and Manti. It also includes parts of Lehi, Saratoga Springs, Eagle Mountain and Nephi.

McDonald has run for the 4th Congressional District before. She sits on a number of local boards and committees, including the Alliance for a Better Utah and Salt Lake City’s Racial Equity in Policing Commission.