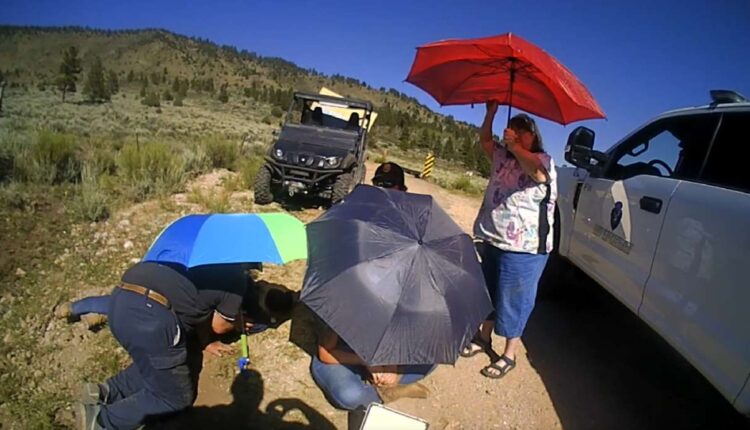 FORT DUCHESNE, Uintah County — No weapons were found in the area where a tribal fish and wildlife officer shot two people in the back last month, according to the Duchesne County Sheriff’s Office.

On July 17, a man and woman were shot by a Ute Tribe Fish and Wildlife officer near Jenkins Park in Uinta Canyon. The FBI office in Salt Lake City released a brief statement with very few details about the shooting, stating only that, “Two nontribal individuals had been shot by a Ute Indian Tribe Fish and Wildlife officer following a UTV incident on tribal lands. The two individuals were transported to various hospitals. … The FBI has taken over the investigation. No further details will be released at this time.”

The couple were taken to hospitals in Colorado for treatment. Updated conditions for the two were not available Wednesday. The tribal officer was not injured.

A Duchesne County sheriff’s deputy was called to assist on the day of the shooting. Through a public records request, KSL.com obtained a copy of that deputy’s body camera video recorded at the scene as well as the initial police report he filed.

According to the deputy’s report, he was called to assist a fish and game officer on a report of shots fired. As the deputy was responding with his emergency lights and siren, “central dispatch advised that the officer was shot along with two suspects and (the situation was) possibly ongoing,” the report states.

“I asked the fish and game officer if the weapons had been secured and the scene was safe,” according to the report.

“There’s no weapons,” a male voice is heard telling the deputy on the body camera video.

The tribal officer also “stated that there was no unsecured weapons and the scene was safe,” the report states.

The officer can be heard on video stating, “They pulled away from me on a side-by-side … ended up taking off … turned around, came back down, that’s when they were shot.”

Two deputies and a police K-9 then searched the area for any weapons that may have been used in the incident and discarded, but none were found, the report states.

“There’s no weapons here at all,” he is heard telling the EMT crew as they arrive.

The deputy then took over for the bystander and applied pressure to the man’s wound on his back. In the video, he appears to briefly apply pressure to a possible wound on the side of the man’s abdomen too but soon takes his hand off that area.

The deputy assists EMT crews in loading the man into an ambulance and then turns off his body camera video when another deputy approaches and asks what happened.

The deputy wrote in his report that the tribal officer told him that she was “a little shake” but otherwise OK.

Deputies also took pictures of the couple’s side-by-side and noted “a possible bullet slug in the passenger seat,” according to the report.

The FBI declined to release additional information on Wednesday, stating that it is still an active investigation.