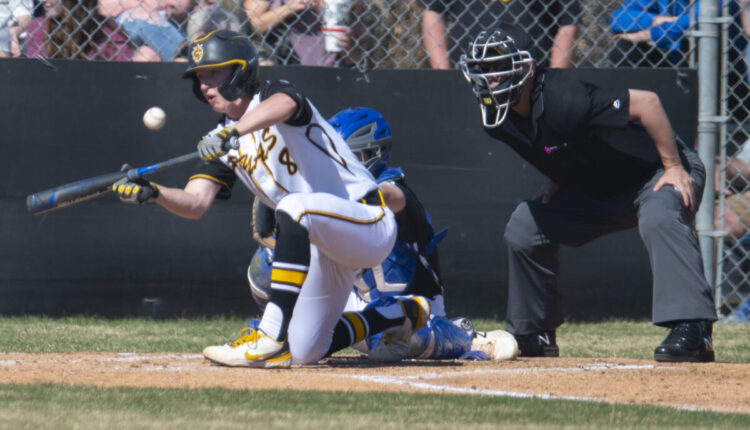 BRIAN WOLFER, Special to the Standard-Examiner

Roy’s Sean Walker (8) goes on a knee for a bunt attempt during a prep baseball game against Fremont on Friday, April 2, 2021, at Roy High School.

The Utah High School Activities Association starts its biennial realignment process with a Board of Trustees meeting on Thursday morning.

Here are a few things to know about this year’s realignment process, from the timeline, to format changes, to how this will affect all schools in Northern Utah over the next 1-3 years.

In Thursday’s meeting, the Board will review enrollment numbers and tentatively divide schools into classifications as a first draft. No discussions about regions will take place.

On Dec 8, the board will meet to finalize classifications and have its first discussion on regions.

On Dec 14, there will be a public meeting at 7 pm over Zoom where the board and UHSAA will take feedback on the proposed alignment.

Thursday’s board meeting will be for the first run-through of classifications. The board will declare “bubble schools” but nothing will be finalized.

“Bubble school” is the term given to schools with enrollments that put them toward the very top or very bottom of their respective classifications.

Bubble schools are given the option to change classifications based on preferences, which could have to do with geography or competitiveness. The board tries to accommodate each school’s request but isn’t explicitly required to.

But before this year, that passage said “plus or minus 7%.” This means more schools will be designated as bubble schools in this iteration of realignment compared to previous processes. This gives the board more flexibility to move schools between classifications if it so chooses.

This could be helpful for schools that have traditionally struggled in 6A or 5A, for example, and have yearned to move down a classification but have, or have had, an enrollment too large to do so.

Who will ultimately be a bubble school, though, depends on where the UHSAA sets the range of schools in 6A.

If one runs the numbers, a different set of schools get “caught” in the bubble on the low end of 6A depending on if the UHSAA wants the 6A classification to be comprised of 26, 28, or 30 schools.

The 6A classification appears fairly straightforward until you start running rough calculations on who might be a 6A bubble school and find that potential bubble schools from Weber and Davis counties are Clearfield, Northridge, Roy and … Weber?

What is anyone supposed to make of those schools possibly being bubble schools? That’s a list of four schools that are currently in three different regions and two different classifications.

And again, until 6A is set, no one can really take a crack at 5A because it’s hard to tell who will be where.

Adding to the murkiness is, ironically, the only near-certainty in this process: 4A will go back to three regions instead of two.

That was the big event of the last realignment cycle. One cycle after being reduced from four regions to three, 4A was gutted to 13 schools in two regions: the Cache County/Bear River region and the St. George/Cedar City region. So 5A, then, ballooned to 33 schools in five regions.

The board will likely pull teams from 5A to re-create a third 4A region. Who might the board move from 5A to 4A? First, let’s find out who’s even in 5A to begin with.

But would the board move anyone from 3A up to 4A? Ben Lomond and Ogden have 4A-sized enrollments, but both schools reported enrollments with 50% or higher free-and-reduced lunch rates. As such, the board allowed them to move from 4A to 3A in the last realignment.

Could the board move up Morgan, which has won just about everything in 3A since the sixth classification was added in 2017?

With the overall murkiness surrounding classification and region makeup described above, don’t forget there’s a new high school on its way in Weber County: West Field, being built in Taylor.

West Field High should change its mascot from Longhorns to Wrenches, given the size of the wrench it’s throwing into this process.

The school is scheduled to open in the 2024-25 school year, the middle of this upcoming alignment. Early indications have West Field’s opening enrollment somewhere around 1,400-1,500 students, which will happen by reducing the population at Fremont, Roy and Weber by anywhere from 300-600 students each.

West Field will likely begin the 2024-25 school year in 5A, likely in Region 5. Who might the Longhorns join in that region?

Will West Field join current 5A school Northridge? With 1,947 students, Northridge appears to be on the 6A/5A bubble, or it could be too big.

Will they join Clearfield? With 2,022 students, Clearfield’s in the same boat as Northridge of wanting to be in 5A, but being much larger than the rest of the 5A schools; however, a larger range of bubble schools could include both the Falcons and Knights.

Will West Field join Viewmont, Bountiful or Woods Cross at all, or will the expected classification and region uncertainty in 5A send the three south Davis schools into a Salt Lake region with less travel?

The even trickier part is trying to forecast what happens for the 2025-27 alignment when Fremont, Weber and West Field have all added students a year after being heavily depleted.

Will all those schools be big enough to be in 6A and join Region 1 with Syracuse, Layton, Davis and Farmington? Or will those Weber County schools still be small enough for 5A?

The latter would possibly create a glut of northern 5A schools that would also possibly include Box Elder, Roy, Bonneville, Northridge, Clearfield and the other three current members of Region 5 (Viewmont, Bountiful and Woods Cross).

Think this realignment’s hard to gauge for the northern schools? It’s just setting the table for 2025.

Lots of options on the table for saving Great Salt Lake, but especially the simplest — use less water | News, Sports, Jobs