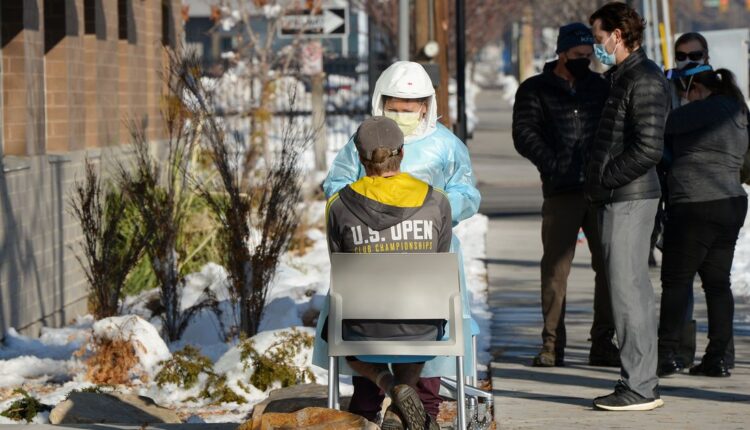 Utah reports 13 deaths, more than 2,500 coronavirus cases in the past 3 days

The 7-day rolling average for new cases is 978, the lowest value since August 16.

(Chris Samuels | The Salt Lake Tribune) People will be tested for COVID-19 at the Salt Lake Public Health Center at 200 East and 600 South in Salt Lake City on Monday, December 20, 2021.

Editor’s note: The Salt Lake Tribune offers free access to critical stories about the coronavirus. Sign up for our Top Stories newsletter sent to your inbox every morning. To support journalism like this, please donate or become a subscriber.

On Monday, the Utah Department of Health reported 2,522 new coronavirus cases in the past three days. 910 new cases were documented on Friday, 863 on Saturday and 749 new cases on Sunday, an average of almost 841 per day.

After further analysis, the health department also reported Monday that 22 cases previously included in the nationwide totals have been removed. It’s unclear why the cases were originally counted, but a health department official said such corrected discrepancies in the past were due to counting errors, retests, or both.

The 7-day rolling average for new cases is 978, the lowest value since August 16.

The number of children being vaccinated continues to rise: 88,027 children aged 5 to 11 have received at least one dose since it was approved. That’s 24.1% of children that age in Utah, according to the Department of Health. And 52,947 of those children were fully vaccinated – 14.5% of that age group.

The intensive care units in the state remain almost fully utilized. UDOH reported Friday that 94.8% of all ICU beds in Utah and 98.9% of ICU beds in major medical centers in the state are occupied. (Hospitals consider anything above 85% functional.) Of all ICU patients, 39.3% are being treated for COVID-19.

Deaths reported in the past three days • 13.

Other deaths included a man aged 45 to 64 in Cache County and a man over 85 in Uintah County.

Percentage of positive tests • According to the original state method, the rate is 10.3% in the last three days. That’s less than the 7-day average of 12.3%.

The state’s new method counts all test results, including repeated tests on the same person. The price on Monday was 5.3%, below the seven-day average of 8.5%.

[Read more: Utah is changing how it measures the rate of positive COVID-19 tests. Here’s what that means.]