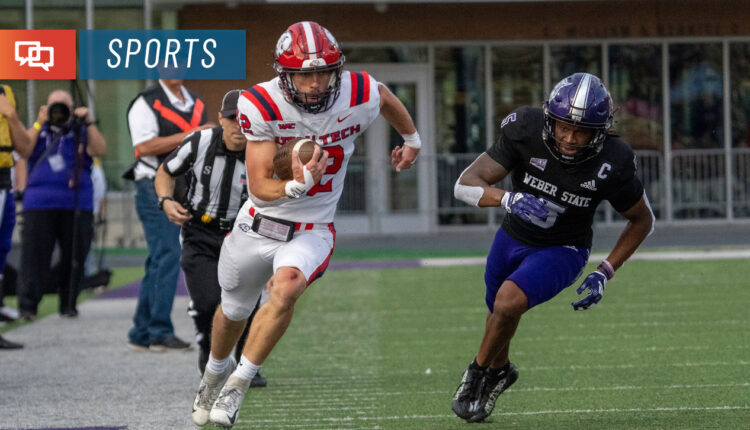 ST. GEORGE – Utah Tech’s football team could not overcome a stingy second helped Weber State defensive effort as the Trailblazers dropped a 44-14 road decision to the No. 13/12-ranked Wildcats on Saturday night at Stewart Stadium in Ogden.

Weber State pounced on the Blazers from the get-go, striking for two quick scores en route to a 14-0 lead just five minutes in. The Wildcats opened the game with a six-play, 77-yard drive in 95 seconds, which culminated with a Bronson Barron to Ty MacPherson 13-yard touchdown toss.

After the Blazers’ first drive stalled after four plays, WSU needed only four plays to go 98 yards, with Barron capping the possession with a 35-yard touchdown pass to Jacob Sharp.

Utah Tech clawed right back with a sustained 15-play, 75-yard drive scoring drive of its own to cut the deficit in half at 14-7. UT’s drive got off to a shaky start as the Wildcats thought they had forced a three-and-out. However Trailblazer punter Andrew Day managed to draw a 5-yard penalty on his boot, which gave UTU a first down.

Sophomore quarterback Kobe Tracy took full advantage of the second life as he completed six his next eight passes, including a big 11-yard connection with sophomore receiver Joey Hobert on 4th and 4 to keep the drive alive.

Tracy also rushed for 13 yards on the drive, which ended with a 5-yard toss to David Fisher, who found himself all alone in the end zone after his defender sloughed off his coverage. Utah Tech’s touchdown was the first offensive TD given up by the Wildcats’ top-five nationally ranked defense this season.

However the Blazers’ new found momentum was short-lived as Weber State answered with its third touchdown of the quarter, which came on another Barron-to-MacPherson hook up, this one from 36-yards out that staked the ‘Cats to a 21 -7 advantages.

The Trailblazers counter-punched on their ensuing possession, covering 75 yards on nine plays to again make a one-possession game at 21-14. Tracy threw for 65 of those yards, with more than half of them coming a 37-yard catch-and-run touchdown to Hobert on 4th and 8 just 44 seconds into the second quarter.

Utah Tech looked as if it had regained that momentum after the Trailblazer defense forced a Wildcat punt on Weber State’s next possession. However WSU turned the table defensively when Maxwell Anderson stepped in front of a Tracy pass to force the sophomore signal caller’s first interception of the season.

Weber State then drove down to the Utah Tech 2-yard line, where on fourth down, the Trailblazer defense rose the challenge and turned away the Wildcats’ with a big goal-line stand.

Utah Tech went three-and-out on its next possession, and the Wildcats were again set up with a short field after Haze Hadley returned the Day punt 21 yards the Blazer 30. Utah Tech’s defense once again came up clutch, holding Weber State to only a Kyle Thompson 24-yard field goal that extended the Wildcat lead to 24-14 midway through the period.

Utah Tech followed with another long possession, this time a 15-play, 59-yard drive that took 6:32 off the clock. Unfortunately the Trailblazers came out of it with no points when after the drive stalled at the WSU 16, Connor Brooksby’s 33-yard field goal try was blocked with 1:07 left until halftime.

The Wildcats then got themselves into field goal range with four seconds on the clock. Weber State would gamble the chance, as instead of Thompson lining up for a 46-yard try, WSU called for a trick play that saw the him rush for 14 yards before UT defensive back Jordan Scott brought the place kicker down to end the half and keep it a 24-14 game.

The second half was all Weber State, however, as the highly touted Wildcat defense limited Utah Tech offense to only 83 total yards over the next two quarters, while the Cats’ scored 13 third-quarter points, and tackled on another touchdown in the fourth to coast to the home victory.

Utah Tech finished with a season-low 331 yards of total offense, 245 of that came through air, as Tracy wound up 20-of-47 passing for 225 yards and two touchdowns. Meanwhile, Tracy (20 yards), along with fellow quarterbacks Boone Abbott (23 yards) and Victor Gabalis (19 yards) accounted for 62 of the Trailblazers’ 86 net yards rushing on the night.

Hobert racked up 114 yards on nine receptions, including his team-leading fourth touchdown catch of the year. With his 114 receiving yards on Saturday night, Hobert became the first Trailblazer in the program’s NCAA era to record three-straight 100-yard receiving games in his first three career games, and became the first to do so in the first three games of a season jumpsuit.

The sophomore also became just the third player in the program’s four-year era to record three-straight, 100-yard receiving games. The last to do it was former Utah Tech wideout Dejuan Dantzler (three-straight) in 2018, while former Blazer tight end Joe Don Duncan achieved the feat twice in 2011 (five-straight) and 2013 (four-straight) during his All- American career.

Barron tallied 368 yards on 25-of-33 passing and four touchdowns, with MacPherson accounting for three of those touchdowns and 140 yards on six catches. WSU running back Damon Bankston also ran for 161 yards on 15 carries and a TD, as Weber State finished with a UTU opponent season high 623 yards of total offense.

Utah Tech will travel north up I-15 to Cedar City to open WAC play at in-state rival and conference newcomer Southern Utah University next Saturday, Sept. 24. Kickoff inside Eccles Coliseum is set for 6 pm