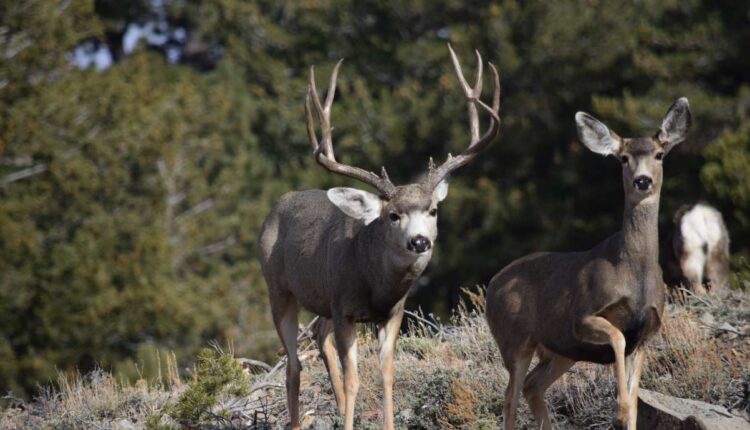 A photo of mule deer in Utah taken on Nov. 12, 2020. The Utah Wildlife Board approved a reduction of more than 1,000 deer hunting permits on Thursday as the species struggles during the state’s drought. (Utah Division of Wildlife Resources)

SALT LAKE CITY — The number of deer hunting permits in Utah is decreasing again this year as the species continues to feel the brunt of the state and region-wide drought.

The Utah Wildlife Board on Thursday approved a reduction of 950 general-season deer permits, as well as 350 total fewer limited-entry and antlerless deer permits after the state biologists reported the state’s mule deer population fell by 9,150 last year to an estimated 305,700 deer . The number of deer is nearly 100,000 below the Utah Division of Wildlife Resources’ objective goal for the state.

State wildlife biologists blame the decline on Utah’s drought, which impacts water supply and wildlife habitats for deer especially. Covy Jones, the division’s big game coordinator, says it’s poor timing for hunters because there has been an uptick in hunting interest in recent years.

But ultimately, the health of the population drives the number of permits issued every year.

“We currently have more demand for deer hunting in Utah than we have the supply for,” he said. “While it is antlerless deer permits, not buck permits, that impact deer population numbers, we are recommending a decrease for both types of permits. We use the data and management plans to make proactive recommendations to achieve healthier herds.”

{#quote} Meanwhile, the statewide drought has had little impact on elk, which are managed in a different way than deer. They are managed by the average age of the species harvested on the land, which helps biologists know the quality of elk in the state, Jones explained.

The popularity of bull elk hunting in Utah, which overloaded the state’s system and led to a failed permit lottery proposal, led to some consideration of allowing more permits. The wildlife board decided to mostly stick with the same number of permits as last year, however.

Deer and elk hunting permits go on sale in July.

As for other permit changes, the board approved:

San Antonio ranks in top 10 for most challenging places to live with seasonal allergies, report says