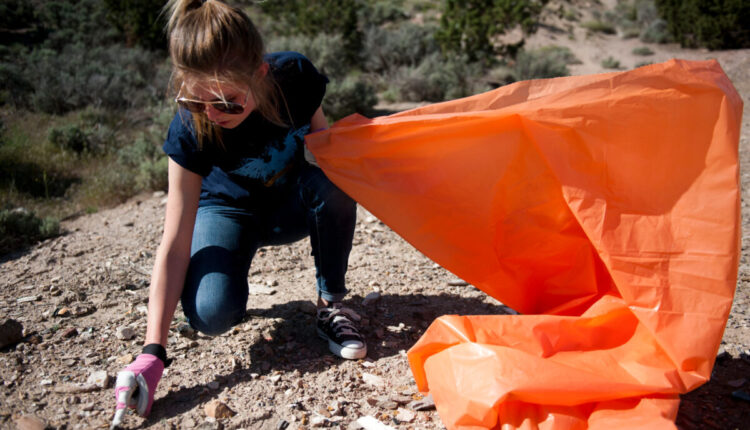 Salem Hills student Hannah Hughes collects small bits of trash on school trust lands west of Utah Lake during a volunteer effort to clean up debris from campers and shooters, in Lake Mountain on Saturday, May 17, 2014. Five local high schools competed to see who could collect the most trash.

The Utah Valley Earth Forum, which was formed in 2006, is a local nonprofit organization dedicated to improving the environment.

“The purpose of the survey is several fold,” stated a press release distributed by UVEF. “First, it gives each community in Utah Valley an opportunity to share with the public and each other what they are doing to help improve the environment, and hence the health of their communities, Utah and the earth. Second, the survey also helps encourage and inform cities and towns as to what they can do, if they are motivated and have the resources, to help make life and the environment better and more sustainable.”

The final purpose of the survey is to highlight Utah Valley communities that are going above and beyond to protect their environment.

The environmental survey consists of 56 questions to gauge cities’ commitment to improving in areas like stewardship policy and education, energy conservation, air quality and transportation, land use zoning and growth, and water conservation.

“For the past two years the response has dropped somewhat, especially among the smaller communities that have fewer staff, and it’s more difficult for them to break away and take the time to complete the form,” said James Westwater, chairman of UVEF.

The cities of American Fork and Mapleton have never responded to the environmental survey.

“You’d have to ask them why not,” Westwater said.

Westwater hopes that by distributing this environmental survey annually, UVEF is reminding the cities of Utah County how much work there is still to do to become more environmentally friendly, but also encourage them to continue the positive efforts they have already made.

“It says ‘hey this is what you can do,'” Westwater said. “One of the main purposes of the survey is to help educate, inform cities what they can do, and to encourage them to do it.”

According to Westwater, through the environmental survey, UVEF has seen consistent improvements in cities’ commitment to sustainability and eco-friendly improvements.

“To see Utah Valley cities, communities and towns moving in helpful, sustainable directions, that’s new in and of itself, and that’s really good,” he said. “The cities are to be commanded for doing this.”

To view the survey, visit survey.uvef.org.