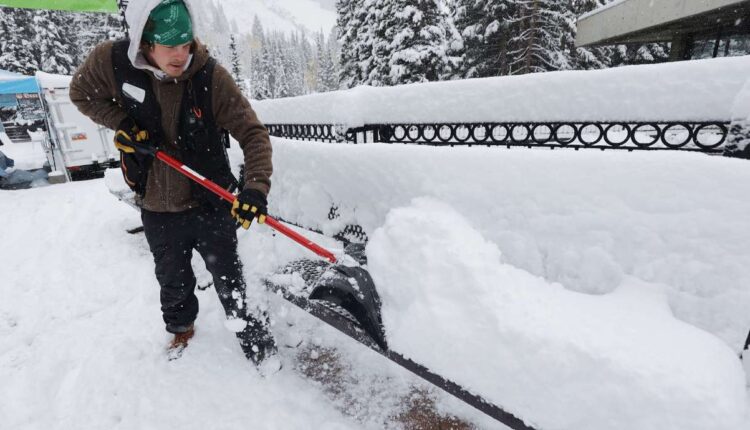 Warning issued for ‘big-time kind of spring storm’ in Utah

Rob Steiner clears snow from a bench at Snowbird on Oct. 12, 2021. The National Weather Service says 1 to 2 feet of snow is possible in the Wasatch Mountains as a result of a storm arriving Monday evening. (Jeffrey D. Allred, Deseret News)

SALT LAKE CITY — It may be spring, but at least one last dose of winter is projected to come Utah’s way this week.

The National Weather Service issued a winter storm warning for the northern Utah mountains where a storm with the potential of delivering 1 to 2 feet of snow to start the workweek. The agency upgraded it from a winter storm watch, which it had originally issued Sunday.

In addition, federal meteorologists issued a winter weather advisory for Wasatch Plateau/Book Cliffs and central Utah mountain ranges, where close to a foot of snow is possible. The storm is also forecast to bring snow to the valleys, as well.

The snow is the result of a trough system coming in from the Pacific Northwest Monday, Eubank explained.

Strong winds are expected Monday prior to its arrival. The weather service issued a high wind warning for parts of south-central Utah, where gusts up to 65 mph are forecast Monday afternoon through early Tuesday. Wind advisories will be in effect for many other parts of the state Monday.

Precipitation is forecast to arrive Monday afternoon, providing valley rain and mountain snow at first. But that changes overnight and into Tuesday, as rain shifts to snow with the arrival of the colder part of the storm.

“By Tuesday, (it’s) all snow, all the way down the I-15 corridor, all the way to eastern Utah,” he said. “Then, a secondary little push comes down Tuesday afternoon and evening, and that keeps stuff going — even lake effect snow going all the way through Wednesday morning.”

How much snow is forecast

The winter storm warning goes into effect at noon Monday and continues through 3 am Wednesday for the Wasatch and West Uinta mountain ranges. It includes communities like Alta, Brighton and Mantua, as well as places along the Mirror Lake Highway.

The heaviest snow is expected in the upper Cottonwood Canyons, where “locally higher amounts” are projected than the 1 to 2 feet of snow, the warning states. Five to 10 inches is forecast for areas within a winter weather advisory, such as Cove Fort, Fish Lake, Joes Valley and Scofield.

Rain and snow will build into northern Utah Monday afternoon. Conditions will be warm enough for valley rain into the evening, but that will transition to snow late evening. Temperatures will be cold enough for mountain snow throughout. Here is forecast accumulation. #utwx#wywxpic.twitter.com/xGb97rz17A

Most valleys along the I-15 corridor — from Logan to Cedar City — are expected to receive snow accumulation. While earlier models indicated the possibility of 3 to 6 inches in the Wasatch Front valleys, updated forecast models now project a stronger likelihood of 1 to 4 inches throughout the duration of the storm.

Bench areas in the valleys and the Wasatch Back, such as Park City or Heber City, may receive anywhere from 3 to 8 inches of snow.

The National Weather Service says drivers should expect “winter driving conditions” on all mountain passes from central through northern Utah Monday evening through Wednesday morning. It will likely lead to traction requirements throughout the time the storm is dumping snow.

“If you must travel, keep an extra flashlight, food and water in your vehicle in case of an emergency,” the agency advises.

These may impact “vulnerable” fruit trees, plants and other early agriculture, the weather service tweeted.

In St. George, highs will fall from the 70s to the upper 50s and low 60s Tuesday and Wednesday before returning to near 70 by the end of the workweek.

Full seven-day forecasts for areas across Utah can be found online, at the KSL Weather Center.

What happens when Mormons stage ‘Fiddler on the Roof’? – The Forward