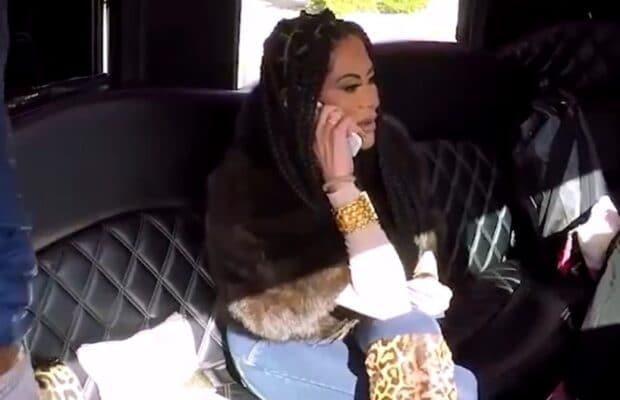 Watch the Moment the Feds Come for Jen Shah (Video)

The arrest of Jennifer Shah will be tackled when The Real Housewives of Salt Lake City returns for its second season this Sunday. The cameras were rolling when federal officials came across the Bravo production, and the footage will open the season premiere.

The cast are preparing for a girl’s trip aboard a luxury bus equipped with cameras. Castmates Heather Gay and Whitney Rose go on board first, followed by new housewives Jennie Nguyen and Lisa Barlow. Shah then enters and sits next to Rose when she receives a call, apparently from her husband.

“OK … OK,” she says when her expression changes. She then asks Rose to turn off her microphone when she gets off the bus.

“I have bad news … I have a call and I have to go,” Shah says to Gay once outside. Then she gets into a gray pickup and leaves the parking lot. 12 minutes later, federal police and homeland security investigators swarm through the area asking about Shah’s whereabouts.

Authorities also get into Shah’s rented chalet to get documents and other evidence.

“Oh my god,” says Rose on the bus when the rest of the cast set off on their journey. “The Real Housewives star is charged with massive fraud and money laundering programs. I got the damn chills. She and (assistant) Stu were charged with stealing people’s money. The deception! “She reads aloud.

The clip ends with Shah leaving the courthouse after being charged, and a producer asks each cast member, “What do you know you’re not saying? Do you know who tipped the Feds on that day? “

As TheWrap previously reported, Shah and Stuart Smith were arrested in late March in connection with a federal telemarketing fraud case. Prosecutors said Shah and Smith targeted elderly victims across the US and created “lead lists” that were then sold to other participants in the program. Shah and Smith are said to be on the “highest level” of the system.

“The Real Housewives of Salt Lake City” premieres this Sunday, September 12th on Bravo. Check out the preview below: