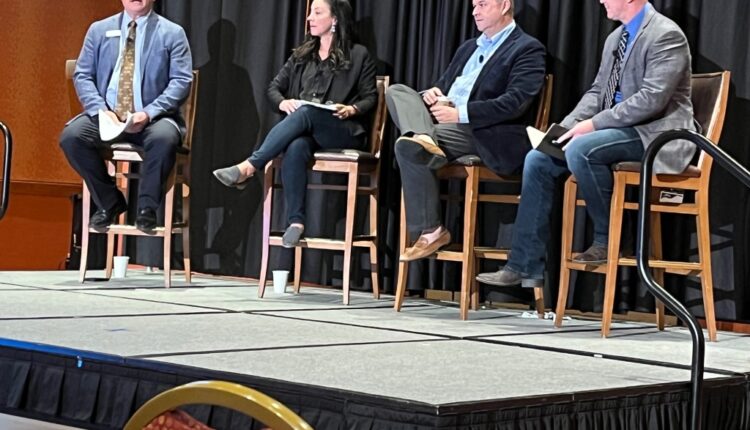 LOVELAND — Those working in the Upper Basin of the Colorado River to break the impasse over future allocations of the river want to accomplish a few select things:

They want the upper and lower basins to be treated equitably.

They want acknowledgment that the majority of the usage problem is occurring in the lower basin states of California, Arizona and Nevada.

They want to preserve the economic vitality of the upper basin states of Colorado, Utah, Wyoming and New Mexico.

Using an airplane analogy, Becky Mitchell, Colorado’s commissioner on the Upper Colorado River Commission, said, “You need to put the oxygen mask on yourself before helping others. That has to be our strategy.”

In the 100th year of the Colorado River Compact — which was signed on Thanksgiving Day 1922 — use of the river remains in high contention.

Members of a panel at the Northern Water Conservancy District’s fall symposium Tuesday in Loveland detailed the past, present and future of the milestone agreement that population growth and climate warming has put into peril. Brad Wind, general manager of Northern Water, led the discussion.

The compact signed in 1922 split the river’s basin into northern and southern parts. Each part was granted 7.5 million acre feet of consumptive use of the river. The states in each part were expected to divvy up their share of the water.

In 1944, the US by treaty allocated 1.5 million acre feet of the river’s bounty to Mexico.

The compact, Cullom said, was designed to create equity between the regions and create space for development.

The basins, however, operated differently. While the upper basin uses hydrology of the region to determine user allocations — in short, water usage depends upon snowpack — the southern basin relies upon the great reservoirs of Lake Mead and Lake Powell. Together, they have a combined storage of 50 million acre feet, and they were full in 2000, Cullom said.

Today, those reservoirs are at 28% and 25%, respectively, of capacity and dropping almost.

The drought that began in 2002 affected the upper basin but not the lower, because of the reservoirs, Mitchell said.

“As we look to the future, we have to say, ‘This can’t happen,'” Mitchell said. “Remember the equity component of the compact. One of the things to remember is that the economic drivers are also in the upper basin,” she said.

Cullom, who lives at Park City, Utah, said entitlement has grown up around the system.”[When] people believe they are entitled to things that no longer exist because of their actions, they do irrational things to restore what they think is rightfully theirs. There are those who believe that they are owed water from the upper basin [to continue their economic interests,] he said.

The upper basin took proactive measures to release water from Blue Mesa Reservoir and Flaming Gorge to protect infrastructure in Lake Powell. That strategy, however, has limits.

In June, the Bureau of Reclamation gave the basins 60 days to come up with a plan. The upper basin responded within that timeframe with a plan that would implement a voluntary conservation program, investigate demand management, continue prior appropriation laws fundamental to water law in Colorado, and put a heavy emphasis on conservation, Mitchell said. Hard numbers were not part of the plan, because the upper basin bases its water usage on snowfall, which can’t be predicted.

The southern basin has yet to forward a plan.

“One of my biggest concerns,” Whitaker said, “is that if we have a good winter this winter, then any relief that mother nature might provide might slow the negotiations.”

“The Titanic is what happens when you continue to do the same thing with the expectation that things will get better on their own,” Cullom said. “We can’t solve the problem for you. They need to compromise in the lower basin.”

This article was first published by BizWest, an independent news organization, and is published under a license agreement. © 2022 BizWest Media LLC.

In a stunning move, LDS Church comes out for bill that recognizes same-sex marriage