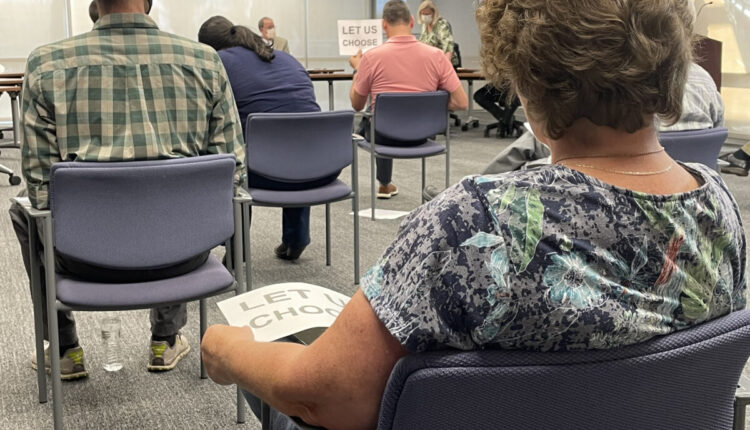 Cindy Whinham, who speaks out against a COVID-19 mask mandate in schools, holds a sign reading “Let’s Vote” at a meeting on Monday, August 23, 2021 in Ogden from the Weber-Morgan Board of Health. (Tim Vandenack, standard examiner)

David Lesser, on the podium, expressed his support for some form of mask mandate as he addressed the Weber-Morgan Board of Health at the Ogden Board meeting on Monday, August 23, 2021. (Tim Vandenack, standard examiner)

Cindy Whinham, who speaks out against a COVID-19 mask mandate in schools, holds a sign reading “Let’s vote” at a meeting on Monday, August 23, 2021 in Ogden from the Weber-Morgan Board of Health. (Tim Vandenack, standard examiner)

David Lesser, on the podium, expressed his support for some form of mask mandate as he addressed the Weber-Morgan Board of Health at the Ogden Board meeting on Monday, August 23, 2021. (Tim Vandenack, standard examiner)

OGDEN – In the districts of Weber and Morgan there will be no mask requirement for children, at least for the time being.

But the district officers in each district will discuss the issue with Weber-Morgan Department of Health Director Brian Cowan, then present their findings to the Weber-Morgan Health Panel when the review is complete, and possibly recommend a plan of action.

Classes are starting across Weber County, but officials who set the course of action on Monday have not set a specific schedule for follow-up, although commissioners can begin their deliberations as early as Aug. 30. The first day of class for Ogden students was Friday, while Weber School District classes begin on Wednesday.

The sensitive issue of masks in schools to protect against the spread of the COVID-19 virus was raised at the Weber-Morgan Health Committee meeting on Monday and publicly commented on by both proponents of a mask rule and opponents. Only 15 members of the public reached out to board members according to guidelines set by health officials. Ten were against a mandate, while five said they were in favor of some form of rule.

A crowd gathered outside the meeting room that was unable to enter due to the social distancing rules in the room where the meeting was held on Monday. Be that as it may, although the issue has sparked heated debates in some places, the Ogden meeting was relatively calm.

Some opponents of the mandate held signs in the meeting room that read: “Let’s choose” while others outside sang the national anthem on some occasions.

The arguments put forward by the public reflect the comments made in the wake of the nationwide debate at the beginning of the 2021-2022 school year. Proponents of the mandate cited children’s vulnerability to COVID-19, as only people 12 and older can be vaccinated, and the import of masks to prevent the virus from spreading.

“School districts in other states that have opened without masks have already seen a huge leap in the sky.” said Davis Lesser, a doctor and husband of Utah Rep. Rosemary Lesser. The delta variant of the virus, the root of most cases recently, is more contagious than the original virus.

Enemies, meanwhile, have questioned the value of masks in preventing the virus from spreading, presenting the problem as a matter of personal freedoms. Whether children wear masks, some said, should be left to parents, not a government agency.

Cindy Whinham, a retired teacher from Roy, said the ability to see faces and facial features is important in a school. “I have to see the faces of my students when I’m in the classroom” She said.

Meanwhile, Amy Carter, Communicable Disease and Epidemiology Nurse for the Department of Health, told the board that there are now more cases in school-age children than there were at the same time last year. At the beginning of schools, she warned of a “significantly higher” case number this year and more hospital admissions and deaths.

The decision by the 13 nominated Weber-Morgan Health Council to instruct the district commissioners to take up the issue in consultations with Cowan was made at the end of the session on Monday. It was guided in part by state legislation, which gave elected leaders more authority over the mask matter.

The members of the Health Committee expressed a number of views on the matter.

Gage Froerer, a commissioner of the Weber district and board member, expressed reservations about being granted a mandate. “I take citizens’ right to self-determination very seriously” he said. He said he’s a firm believer “in personal choice.”

Froerer proposed the motion, which was eventually approved by the board, to allow commissioners in the Weber and Morgan counties to look into the matter and come up with a possible plan of action.

Bonnie Wahlen, another board member, advocated the use of masks, if not necessarily a mandate. “Masks will make our children safer” She said.

Cowan has reservations about imposing an immediate mask mandate as schools are just starting. He said he would prefer an approach similar to Summit County’s.

The plan that went into effect there last Saturday says that face covering would be required if the 14-day COVID-19 positivity rate among students, staff and teachers in a single elementary school reaches 2%. The rule does not apply to middle schools or high schools.