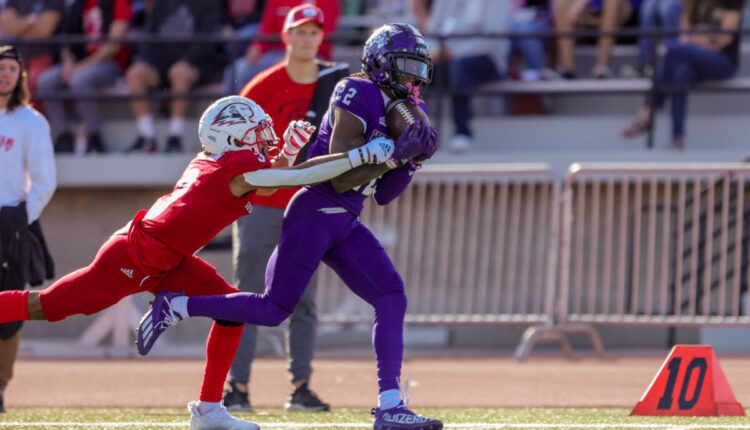 Weber State receiver Rashid Shaheed (22) hauls in what would be a 47-yard touchdown reception against Southern Utah on Saturday, Nov. 13, 2021, in Cedar City.

Southern Utah University’s 10-year athletic run in the Big Sky Conference is officially coming to an end in two weeks but the Thunderbirds will still feature consistently on Weber State’s football schedule in the future.

Weber State and SUU announced an agreement Thursday to play a six-game football series beginning in 2026 and finishing up in 2031, continuing what the schools have called the Beehive Bowl.

Southern Utah officially leaves the Big Sky and joins the Western Athletic Conference, which recently relaunched football at the FCS level, on July 1.

Weber State has won five straight games in the series, the most recent a 62-0 drubbing last November at Cedar City. WSU went 7-4 against SUU while both shared the Big Sky Conference, including 10 regular-season games and WSU’s 30-13 playoff win in 2017. The Wildcats are 21-8 overall in the series.

The contests are Weber State’s first nonconference games created for the 2026 season or beyond.

WSU is in need of a 2023 nonconference home game, likely to open the season. Weber is currently slated for 2023 road games at Northern Iowa and at Utah.

“The Big Sky Conference is a leader in athletic excellence and more importantly the holistic development of student-athletes,” Mortensen said in a news release. “While the landscape of collegiate athletics continues to evolve, I am excited to work with Commissioner Tom Wistrcill, conference staff, Big Sky presidents, and athletics leadership teams to position the conference and our student-athletes to thrive in a way that invigorates our universities , communities, alumni, and fans.”

KHN’s ‘What the Health?’: Closing In on Covid Vaccines for ‘The Littles’