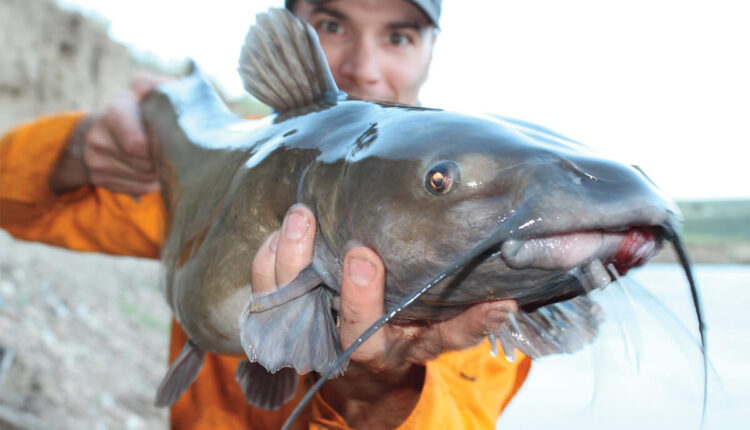 Live bait and fresh cut bait will catch more catfish than the stink baits that were popular a generation ago. (Photo courtesy of Tyler George)

Trout may be king across the West, but for a small group of die-hard warmwater anglers, catfish are every bit as challenging, abundant and accessible, and these disciples are eager to spread the gospel of the whiskerfish.

But we’re not just talking about lazy-water channel catfish. The region has a surprising number of flatheads and blue catfish—and big ones, too. Most of these trophies swim in the region’s biggest reservoirs, but rivers also produce impressive numbers and sizes of catfish. The West’s warmwater fisheries are among the most diverse in the nation, ranging from big, tidal-influenced rivers such as the Sacramento to large flatland rivers like the Missouri and Arkansas.

The key to catching catfish on any of these waters is rethinking your idea of ​​the sport, says Brenner Flaten. Vice president of the Montana Catfish Association, says Flaten anglers who move frequently to find active fish, understand the seasonal patterns of cats and present fresh baits to them can catch whiskerheads anywhere in the West.

“This isn’t sitting on a bucket and drowning rotten chicken livers or stink baits on one patch of shoreline all day,” says Flaten. “Those days have passed on. Now, if you want to consistently catch catfish, you have to be moving, finding the fish that want to bite and know what to feed them.”

Flaten says that in most river and reservoir systems across the West, big whiskerfish will come as a bonus to lots of fish. By that he means that if you can find the actively feeding fish, you’ll not only have plenty of hook-ups, but a certain percentage will be whoppers.

“Obviously, it’s a lot more fun to catch five fish in 20 minutes and hope you catch a bigger one along the way rather than sitting on a spot for an hour and hoping to catch just one big one.”

TAKE A VARIETY OF CATFISH BAIT

The key to finding fish is covering plenty of water, says Flaten.

“You want to be moving, whether you’re a boat angler or on shore,” he says. “On large rivers, you’re probably talking about boat fishing, but on reservoirs, plan to fish different depths and different types of structure until you find a pattern.”

Once you find the fish, you want to present feed that fish want, and Flaten says that summertime channel cats are suckers for fresh bait.

“They’ll bite dead baits, but they prefer fresh, natural baits,” he says. “For channel catfish on large rivers and reservoirs, fresh cut bait is key. In our area of ​​the northern range, goldeye are great, but all types of suckers will catch channel cats. If it’s not fresh, you can use frozen bait, but make sure it’s been frozen fresh and has plenty of blood that will ring the dinner bell as it thaws on your hook.”

Flathead cats, on the other hand, prefer live bait to cut baits. Hook sunfish or bluegills (where legal) just behind the dorsal fin and let them swim erratically until the big predators find them. If you want to increase your catch rates, make sure live bait drifts past cover, such as downed timber, shoreline riprap or sunken rock piles.

Because catfish are so widely distributed across the West, and occupy such different types of waters, ranging from the region’s largest rivers and reservoirs to smaller impoundments, tactics must be equally varied. California presents several challenges, not only because of more restrictive fishing regulations, but also because so many of the best lakes are private and closed to nighttime fishing. 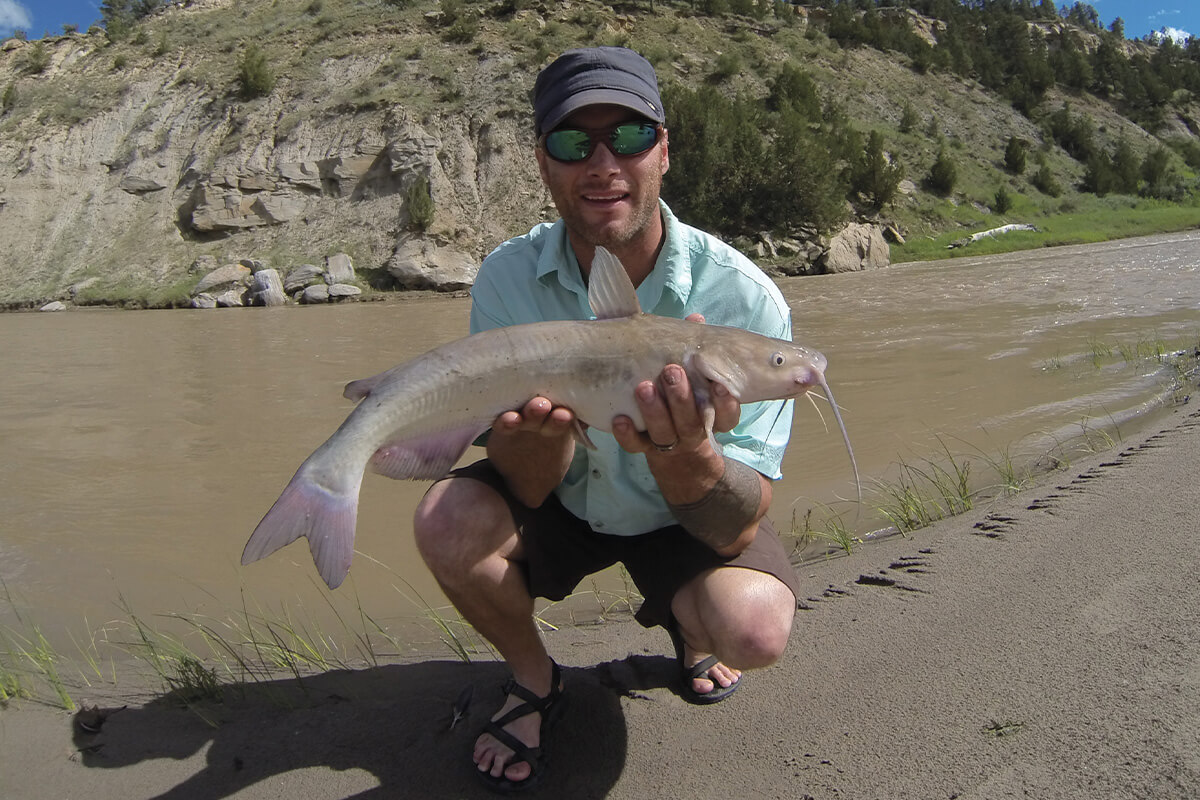 Drift bait past shoreline structure like rocks and downed trees to target catfish holding in the slack water behind these obstructions. (Photo courtesy of Tyler George)

Golden State catfish ace Kirk McKay says an oily bait that sends out a strong scent trail is key for catching daytime channel cats on busy waters. Cut mackerel or bonito or whole anchovies work well, but he also likes live nightcrawlers and crawfish, and says that live saltwater bloodworms can be an excellent bait for both channel and white cats. “Frozen baits that work well include shrimp, clams, sardines and cut barracuda,” he says.

While you can catch cats when the summer sun is high in the sky, both Flaten and McKay note that the best times are the first hour of sunlight in the morning and the last two hours in the evening.

“In the summer, night fishing can be exceptional, too,” says Flaten. “That’s not everybody’s idea of ​​a good time—fishing with a headlamp when normal people are sleeping—but that’s when the bigger fish get caught in almost any catfishery.”

And, on many public waters where recreational boaters and personal watercraft dominate on summer afternoons, nighttime can bring settled conditions and more relaxed fish.

Obviously, safety is a paramount consideration when fishing at night.

But if you have a boat rigged with the legal lights and know how to navigate around any hazards and return to the ramp, night fishing is the only way to go on busy, big-cat destinations such as Brownlee Reservoir in Idaho, Patagonia and Roosevelt lakes in Arizona, Elephant Butte Reservoir in New Mexico and the Colorado River impoundments of Lake Mead, Lake Powell and Lake Havasu.

Top Catfish Spots Throughout the West

We could devote an entire edition to the West’s great catfisheries, but here are destinations to consider in each state of the region, as well as tips to fill your stringer.

ARIZONA | Theodore Roosevelt Lake: This central-Arizona impoundment of the Salt River has it all—abundant channel cats that routinely weigh up to 35 pounds, flatheads that top 50 pounds and lots of eating-sized whiskerfish that can be caught from just about any point. Trophy flathead anglers fish live bluegills in deep-water cover. Cougar Point and Wildcat Shoal are productive nighttime spots for channel cats.

COLORADO | Pueblo Reservoir: Pueblo is home to both the flathead and blue catfish state records, along with a dizzying variety of other game fish. Focus efforts deep on the western end near where both Rush Creek and the Arkansas River enter the impoundment. Night fishing is key here in deep summer.

IDAHO | Snake River: The Snake in Owyhee County, just upstream of Brownlee Reservoir, is the hot spot for giant flatheads that can top 50 pounds. The reservoir itself is a good option for fast action on channel cats and black bullheads. Chunking cut bait at night near the inlet of Brownlee is the recipe for stringers of whiskerfish.

MONTANA | Yellowstone River: The ‘Stone is better known for trout in its headwaters, but downstream of Billings, this becomes Montana’s best channel catfishery. Drift cut bait in the daytime just off the bottom or soak a frog at night near the shorelines for consistent action on cats 8 pounds and heavier.

NEVADA | Lahontan Reservoir: The top Battle Born State water is a toss-up between this lake, known more for its magnum namesake cutthroats, and South Fork Reservoir. It all depends on water, but for larger channel cats, hit South Fork; for numbers, plus bonus white cats, fish Lahontan.

NEW MEXICO | Elephant Butte Reservoir: This impoundment of the Rio Grande gave up a 55-pound blue catfish last May that was released to fight another day. Fish cut shad along rocky drops and any submerged timber. If you can fish bait under larger bobbers at night, you’ll get bites.

OREGON | Columbia River: It’s tempting to use the same text that we used for Idaho here, since the other side of the Snake River is Oregon, but the John Day Pool of the Columbia has some excellent channel catfishing and great access.

UTAH | Utah Lake: Both bullheads and channel catfish are on tap at this accessible lake, and shore anglers soaking nightcrawlers do just fine on both species. The best bullhead fishing is in May and early June, but look to deeper water near any anemic inlets for summertime channel cats.

WASHINGTON | Ice Harbour: Almost any spot in the Channeled Scablands where the Snake and Columbia rivers flow will produce good action for channel catfish, but in June and July, it’s best to fish the mouths of tributes. These generally won’t be the largest catfish in the West, but every year a 20-pounder or better hits the shore at North Shore Recreation Area and Lyons Ferry State Park on the Snake.

WYOMING | North Platte River: This is a tale of two great fisheries. Float cut baits in the North Platte near Torrington, close to the Nebraska state line, for a mix of fast action on channel cats and the outside chance at a flathead catfish. On the other side of the state, Flaming Gorge Reservoir, on the lower Green River, produces consistent action for channel catfish along the many shoreline access points on both the Wyoming and Utah sides of the impoundment. The best tactic is to drop cut bait on the breaklines between rocky drops and muddy flats.