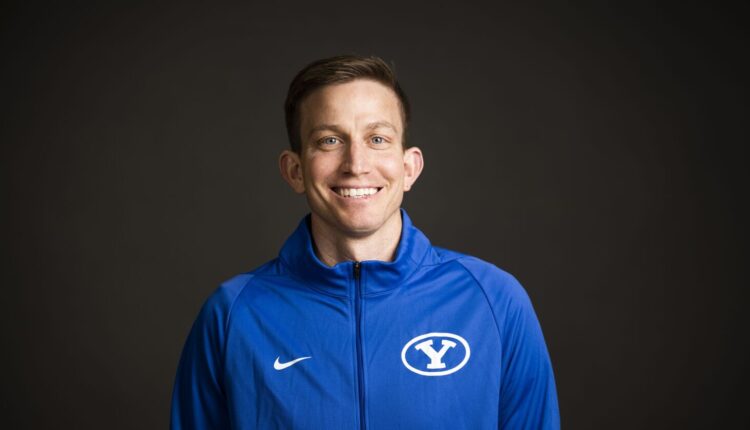 What is assistant Lee Cummard’s perspective on BYU women’s basketball?

For BYU women’s basketball associate head coach Lee Cummard, the past several months have been, in his words, “a complete roller coaster” ride.

In 2021-22, the Cougars enjoyed an historic 26-4 season and West Coast Conference regular season championship that concluded with a disappointing first-round exit from the NCAA Tournament.

“We’re having such a great year with so much excitement and energy. The way that it ended, I feel like we played our two worst games of the year in the last two, which you don’t want,” Cummard said. “Then we were getting in the groove and getting excited for the summer and running it back with who’s returning and the freshmen.”

It was a surreal moment for those within the program, including Cummard, who experienced a wide variety of emotions.

And he also realized it provided a chance to interview for the vacant head coaching job.

“It was a weird couple of days. Juddy’s synonymous with BYU women’s basketball with all of those years, all that success and all of those accolades for himself and his players and championships. And then there might be an opportunity to be in charge,” he said. “Going through that process was exciting, having a dialogue with many people. I was getting down to the core of who you would want to be or the staff you’d want to be a part of in the event of a change.”

One of the people Cummard talked to during the process was Amber Whiting, who was also interviewing for the job. There was an unspoken understanding between them that if one of them were hired as head coach, the other would be part of the new staff.

“We knew we wanted to work together and build this thing, and add to all the good that Juddy has done over the years,” Cummard said.

As it turned out, Whiting was hired as BYU’s head coach and she brought Cummard on board shortly after, elevating him from assistant coach to associate head coach.

“I couldn’t be more excited to have Lee with me as associate head coach,” Whiting said in a statement at the time. “Not only was he an amazing player here at The Y. but he brings a wealth of coaching knowledge and experience. Lee has established himself as a great recruiter, and I see him continuing in that capacity, along with expounding upon skill development, game prep and in-game tactics/adjustments. I’m looking forward to working side-by-side with him as we take on this new challenge.”

Relationship with the Whitings

Like Whiting’s husband, Trent, Cummard played professional basketball for several years overseas. Cummard and the Whitings didn’t know each other at the time.

When Cummard was hired as a graduate assistant on Dave Rose’s staff on the men’s team, he began recruiting the Whitings’ son, Jace, who is now at Boise State.

“I got to know them through that. I got to know Amber a lot more through Amari’s recruitment than Jace’s,” he said. “I feel like I’ve recruited everybody in their family at one point or another. It’s a great relationship. Through the (interviewing) process, we talked a lot. We knew there was the potential of working for, or with, each other.”

Cummard is thrilled to be able to remain at BYU.

“We love Provo. We love BYU. We like the girls here and the time we get to spend with them and impact their lives,” he said. “I was thrilled when Amber called me. I was pumped.”

As for his role on Whiting’s staff, Cummard brings continuity in terms of knowledge of roster and recruiting efforts. And, of course, Cummard, who led the Cougars to three consecutive Mountain West Conference titles from 2007-09 and earned 2008 MWC Player of the Year honors, is intimately familiar with BYU.

“I know BYU like the back of my hand. I’ve been around for so long. A value there, an asset in that regard. A connection with the current roster. Just trying to help any way I can,” he said. “The role of everybody on staff is still evolving as we add members. We’re trying to get a feel for everybody’s style and how practice should run. As she gets comfortable with us and the players and our abilities and how she can put everyone in position to excel and help the team — that’s still evolving.”

Shaylee Gonzales and the transfer portal

Cummard said Gonzales, who has two years of eligibility remaining, is exploring her options and visiting different campuses. But BYU’s coaches are still communicating with her.

Is there a chance she could choose to return to Provo?

“Until she picks somewhere else, there’s always a chance,” Cummard said. “The dialogue has been great. Shaylee’s amazing. She’s going through this process like a genuinely good person. She’s gathering all of the info that she wants and she’ll go from there. The dialogue is still open. She’s taking visits. She’s been awesome. Time will tell. Our arms are wide open. She can go down as the greatest player in BYU history. You can also lead this team to the farthest point in the NCAA Tournament that’s ever happened. That’s not just me saying that. There’s a roster here next year that can get something done. If it’s not her, hopefully, somebody else steps up. There’s a great group of freshmen last year that were waiting patiently. They’re going to get a big opportunity, even if she is back.”

Cummard acknowledged that it was difficult not having a head coach in place during the time the transfer portal was the most active.

“I wish the decision on the head coach would have happened a month earlier. Timing wasn’t ideal because of the portal. We don’t want to build the program through the portal. But the portal’s not going anywhere; it’s a real thing,” he said. “With Shaylee being in the portal and being unsure of how that shakes out, the wave of the portal has had its effect. We’re still talking to people. The wave had come and gone by the time Amber was hired.”

Meanwhile, Whiting and her staff have been busy recruiting. Lone Peak’s Kailey Woolston committed to the Cougars and will join the team in 2023-24, just before BYU’s first season in the Big 12. As a junior last season, Woolston averaged 19.7 points, 6.1 rebounds and 1.5 steals for the Knights, who posted a 23-0 record and won the 6A championship. She was named the Deseret News’ 6A Player of the Year.

Coaching on the women’s side

Cummard knew while he was playing that someday he’d like to give coaching a shot.

But not necessarily coaching women.

“Honestly, there’s not as much of a difference as I thought it would be in regards to the basketball side of things. Is there a difference? No question,” Cummard said, who’s entering his fourth season with the BYU women’s basketball program. “We’re not drawing up alley-oop plays but the game and how to play it and teaching the game is very similar. I love the prep and the flow of the season. It’s just great. A lot of the principles of having success are the same.”

How does Cummard describe Whiting’s coaching style and philosophy?

“Intense. Fiery,” he said. “I’ve seen enough AAU games of her coaching to know it’s there. Her expectation is to get in a defensive stance and guard somebody.”

Cummard believes a solid foundation has been laid in the program as it gets set to transition to the Big 12 in 2023-24.

“What coach Whiting is doing so far, and as everybody acclimates to her and what she wants, it’s good. I’m impressed with her intensity and fire and it resonates with the girls,” he said. “We’re all getting to know each other. Even in the (West Coast Conference), your work is cut out for you. We’re a week into summer workouts and it’s been good. A lot of new and some familiar but it’s a little different and more intense.”

Of course, Cummard appreciates all that Judkins taught him. Judkins holds the school record for most wins by a head coach in BYU basketball history, men or women, leading BYU to a 456-204 record during his tenure.

“I’ve never met anyone that’s had anything bad to say about coach Judkins. He’s been in the game for so long. The community around BYU, the whole state of Utah,” Cummard said. “As you go on the road and talk to coaches, everyone loves Juddy. He taught me a lot. I like talking hoops. He was always game to talk. He has a good crack for keeping it light and free, but also, hey, let’s focus on what we need to for the next game. He trusts his kids a lot. He lets them play with a lot more freedom than I would have ever guessed. It paid off for him.”