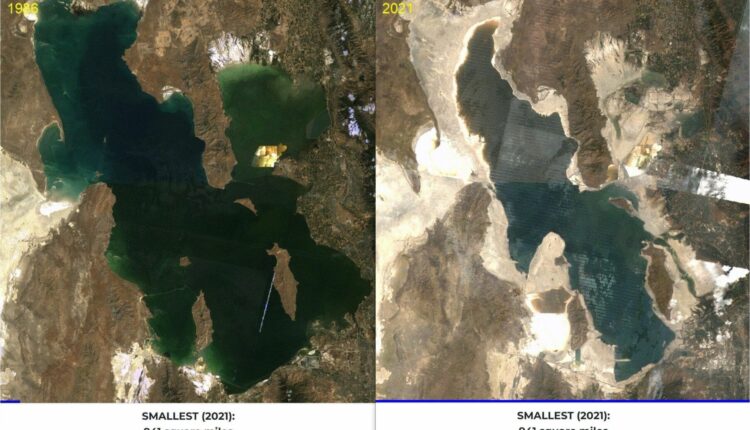 By Alexa Elliot and Sydni Merrill

As the western United States faces its driest and hottest period in at least 100 years, Utah and surrounding states could learn from a country 6,000 miles south that is in an advanced stage of grappling with water scarcity and other climate disasters.

In the last few years, Chile has seen its ski seasons shortened, some lakes and rivers dry up, and its capital city of Santiago placed in a state of emergency due to water shortage. Extreme heat has caused record-breaking wildfires and extreme rainfall has caused massive flooding. Large parts of the city of Valparaiso, a UNESCO World Heritage Site, burned to the ground in a 2014 wildfire. Earthquakes are constant and even though many newer buildings are constructed with modern earthquake resistance methods, some areas still carry the scars of a magnitude 8.8 earthquake that flattened sections of Santiago in 2010.

Chile’s economic inequality makes the impacts of climate disasters and extreme weather events felt more keenly by those who have the fewest resources to recover and rebuild. In fact, the economic inequalities in Chilean society led to violent outbursts and general civil unrest in 2019. That period resulted in a three-year process toward a new constitutional order. The debate over the proposed constitution, which attempted to address climate change in fundamental ways, gripped the country in the months leading up to a September 2022 vote.

Utahns and others in the Intermountain West would do well to heed the lessons of the Chilean experience. In August, two BYU journalism students spent a week in Chile, researching climate change and civic engagement and convey some of the lessons learned in the following article.

Utah is in its hottest and driest several years since the beginning of last century, according to a study published in the March 2022 issue of the Nature Climate Change journal.

Benjamin L. Cook and Jason E. Smerdon, two faculty members at Columbia Climate School Lamont-Doherty Earth Observatory, along with Park Williams, a professor in the University of California Los Angeles Department of Geography, collaborated to study how the megadrought emerging in the southwestern area of North America has intensified from 2020-2021.

Particularly close to home, the study noted that water levels of Lake Mead in southern Nevada and Lake Powell in southern Utah have fallen drastically. Extreme heat and aridity dominated the last 20 years.

“In summer 2021, these reservoirs reached their lowest levels on record, triggering unprecedented restrictions on Colorado River usage,” the authors wrote.

In northern Utah, the Great Salt Lake’s levels have also dropped substantially, according to the U.S. Geological Survey (USGS). Extreme drought not only puts Utah in danger of scarcity for human water use, but it also endangers the habitat and food for migratory birds and could reduce the state’s gross domestic product.

This time lapse shows the surface level of the Great Salt Lake in 1985 compared to 2021. Water surface levels have significantly dropped since 1985. (Photo courtesy of U.S. Geological Survey.)

“Provo City is being waterwise,” Kaufusi said. “In the short term, by encouraging citizen water conservation, and in the long term, by emphasizing ground water storage, recycling, re-use, and other sustainable methods that reduce demand for new water, limit evaporation losses, protect water quality, and align with natural recharge.”

BYU’s Sustainability Office is tracking its own conservation progress. The Office published a video, “BYU Sustainability: Central to our Purpose, Integral to our Faith,” in September 2021. BYU focuses on composting, recycling, and water reduction to decrease its waste. By making campus walkable and compatible with public transportation, BYU hopes to see a continuing drop in emissions.

Kaufuski and BYU both rely on proactivity to create a difference for the community. As Kaufusi said, “water management is the responsibility of all.”

Kaufusi is confident that the City of Provo will be able to lead out and have positive impacts for all of Utah County. Small-scale local efforts can positively affect the global community, she said.

The Chilean Experience with Climate Change and Politics

Chile’s Pacific coastline stretches about 4,000 miles from the northernmost border with Peru to the southern tip near Antarctica. This South American country contains various climates and ecoregions including forests, deserts, and glaciers. From the temperate coast to the Andes Mountains, altitude in Chile ranges from sea level to over 22,000 feet.

Climate change impacts Chile profoundly. Water scarcity is a major issue. Glaciers are melting, lakes are drying up, and an unequal distribution of resources is impacting people’s livelihoods. Even copper mining–Chile is the world’s largest producer and the mining industry is a major provider of jobs–is being hampered by water shortages.

Aculeo Lake is a stark example of how water scarcity is affecting Chile. Once a beautiful lake destination about an hour south of Santiago, Aculeo Lake is now completely dry. Cracked mud etches the former lake floor and broken down boat docks stand aimlessly on dry ground.

This lake was similar to many lakes in Utah–a popular vacation hub where families swam, sailed, and fished and an important source of water storage for local agricultural and other uses. It was a source for drinking water and irrigation. According to Chilean university professors in the research article, “Water management or megadrought: what caused the Chilean Aculeo Lake drying?,” the lake’s water levels began rapidly shrinking in 2010.

According to the article, “this natural disaster is concurrent with a number of severe and uninterrupted drought years, along with sustained increases in water consumption associated to land use/land cover (LULC) changes.”

Four years later, two BYU journalist students visited Aculeo and saw beautiful gated lake houses that appear dilapidated and bear “For Sale” signs. Restaurants and markets that line the road to Aculeo are quiet. Boats lie turned over on their sides, seemingly never to hit water again. The center of the lake is cracked and caked with dried mud. The edges of the lake now grow modest vegetation that feeds cattle and horses.

Aculeo Lake is an echo of what it once was and a warning about the dangers of climate change and water scarcity.

Water scarcity and other environmental impacts are at the forefront of many Chileans’ minds. Chilean farms, mines and other industries are struggling, and the economic impacts are being felt throughout the economy.

In October 2019, a civil uprising known as the estallido resulted in subway stations being burned and curfews imposed. The unrest stemmed from economic inequality and rising living costs even in the face of stable wages or even wage cuts. Political leaders promised a new constitution to address not just the economic inequality but also the impacts of climate change. The desire for change also led to the election of former student protest leader and 36-year-old leftist Gabriel Boric.

Boric took office in March 2022 and, so far, his government has struggled to improve conditions relating to the economy and climate. Notwithstanding a clear call for change, Chileans on Sept. 4 rejected the proposed new constitution by a 62 percent to 38 percent vote. While policymakers and commentators are still trying to figure out exactly why the proposal failed, it seems one of the lessons is that constitution drafters tried to pack too much into a single document. The constitution, drafted by a group of 154 people elected by their respective communities throughout Chile, contained nearly 400 articles and was more than 100 pages long. (See sidebar for more on the constitution.)

The rejected constitution was historical in its focus on climate change and natural resources. The constitution included an entire chapter on nature and the environment.

“Those who favor the constitution say that it is the first ecological constitution in the world,” said Ivan Martinic, editor at Chile’s largest newspaper, El Mercurio. Martinic spoke with the Daily Universe in August at a Santiago cafe. “The rights to nature are guaranteed.”

Article 127 of the rejected constitution read, “Nature has rights. The state and society have the duty to protect and respect it.” The question now is how this sentiment will be incorporated in any future constitutional revisions. Chilean leaders are still trying to figure out a way forward, and some optimistic leaders believe a new constitution could be drafted and voted on by 2023.

While many countries have drafted legislation protecting the environment, it is often connected to human rights. However, linking human rights to nature sometimes provides “justification to cause ‘legal’ environmental damage, under the cover of property rights and even social rights,” according to Monserrat Madariaga Gómez de Cuenca in her article “Rights of Nature in a new Chilean constitution.” When the environment is given specific rights, it is better protected.

For Chileans, it’s about bridging the gap between environmental science and legislation and politics.

Alex Godoy is the director of Sustainability Research Center and Strategic Resource Management at the Universidad de Desarrollo, a private university in the Andes foothills above Santiago. He said, “We have a big portfolio of technical solutions, but applying the solutions, we’re going to need effective political decision making.”

Seeds of change are planted in everyday conversations. The weeks leading up the constitutional vote in Chile were full of various forms of dialogue concerning the constitution. On campus and in university classes, students and teachers discuss methods on how to limit personal impact on the environment. Yet despite the current conversation, both Chile and the United States face dropping levels of civic engagement.

According to a recent study by Brigham Young University and the University of Virginia, certain demographics are consistently less likely to vote in the United States. After analyzing 400 million voter records from 2014 and 2016 elections, the study found that minority groups, those supporting the Democratic party and young people under the age of 30 vote less than majority ethnicities, supporters of the Republican Party and people over 65. 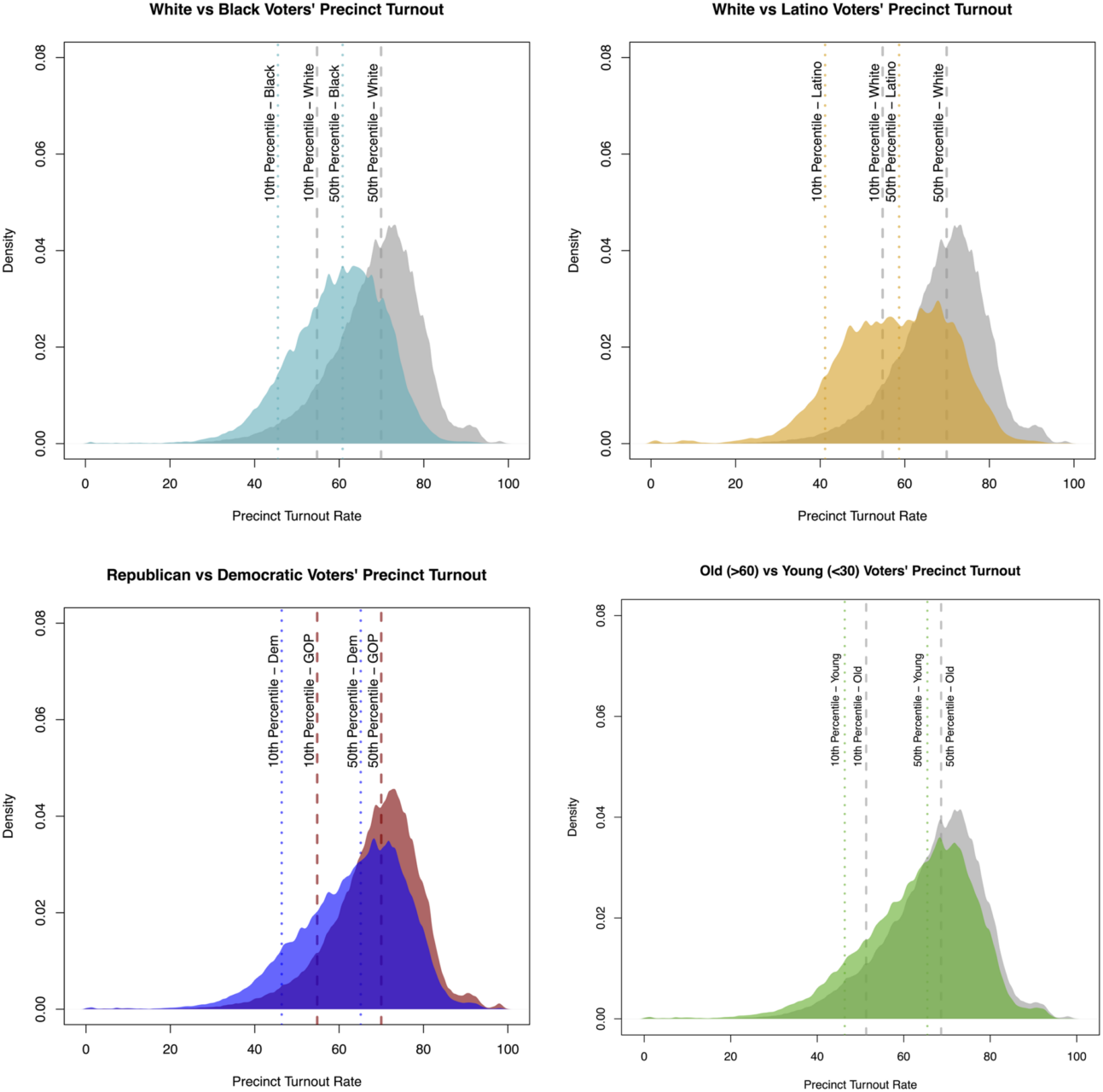 Graphics showing voter turnout among different demographics in the United States. (Photo courtesy of the Public Library of Science).

Americans 60 years and older voted at a rate 47 percentage points higher than citizens under the age of 30. Yet, it’s the rising generation that inherits the world’s problems. At times, the question on how to address issues such as climate change can feel overwhelming.

However, Diego Rivera Salazar, a professor at the Universidad de Desarrollo, said taking responsibility and action as individuals and community is essential in addressing climate change. “Because if we’re always demanding more water, that means that scarcity is becoming more and more profound,” Rivera said.

Rivera’s primary research focuses on water scarcity and water resource management.  He said that there are two variables with water scarcity. The first variable is overall water availability from precipitation, dams, and snowfall. The second is water demand — how much water we use.

“At the end of the day, there’s no way to make more rain, but even though we are not going to make any rain, we do have the power to use less water,” Rivera said.