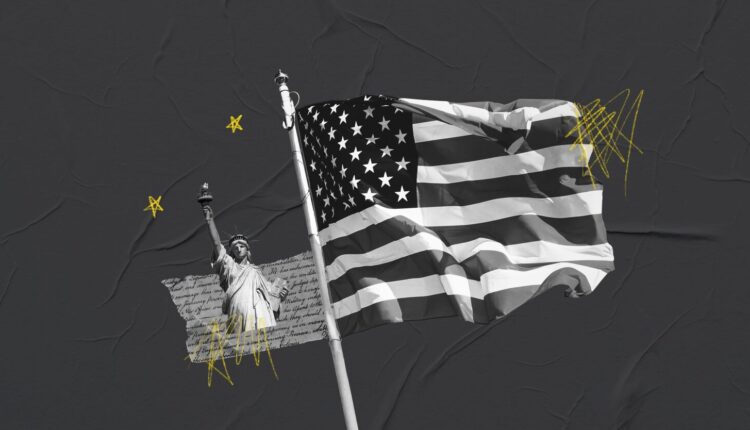 Who were the Latter-day Saints on the ballot for Congress from Utah and beyond?

Members of The Church of Jesus Christ of Latter-day Saints were on the ballot running for seats in the US Senate and the US House of Representatives across Arizona, Idaho and Utah. The church does not “endorse, promote or oppose political parties, candidates or platforms,” according to public statements. But church leaders encourage members to participate in politics through voting and running for public office. The following are the Latter-day Saints who were on the ballot running for Congress this year.

Rep. Andy Biggs currently represents Arizona’s 5th Congressional District in the US House and is seeking reelection against Democratic challenger Javier Ramos. A native of Tucson, Arizona, Biggs served a Latter-day Saint mission to Japan. An attorney by trade, he graduated with degrees from BYU, University of Arizona and Arizona State University. In the early 1990s he became financially independent after winning $10 million in American Family Publishers sweepstakes. He’s currently running against Democratic challenger Javier Ramos, an attorney born in Phoenix, Arizona. 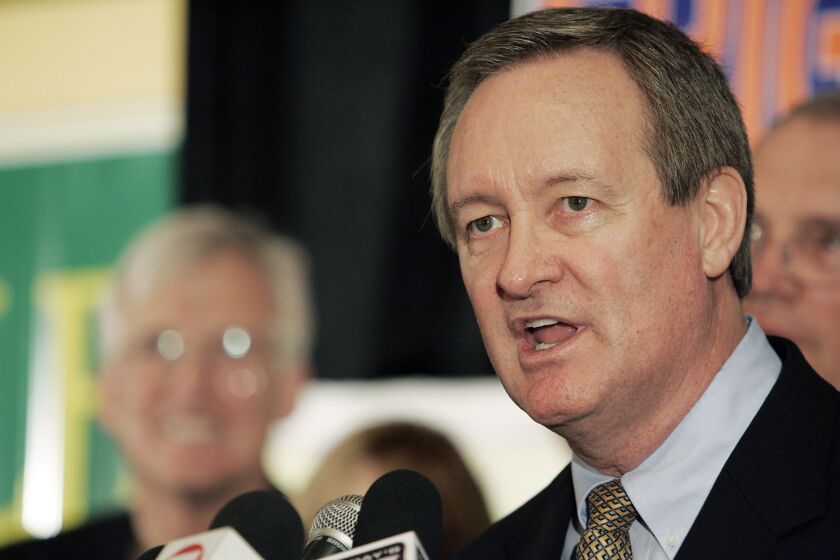 US Sen. Mike Crapo, R-Idaho, gives his victory speech at the Republican Party election headquarters held at the Doubletree Riverside Hotel in Boise, Idaho, on Nov. 2, 2010.

Sen. Mike Crapo, R-Idaho, is seeking his fifth term in the US Senate against Democratic challenger David Roth. A native of Idaho Falls, Crapo graduated from BYU before earning his JD from Harvard Law School. Crapo first entered the political arena to help his brother win a seat in the Idaho state legislature. Two years after his brother died from cancer, Crapo entered politics and won a seat in the Idaho state Senate in 1984. Four years later he was elected as president pro tempore, and in 1994 Idahoans elected Crapo to the US House of Representatives, where he served three terms before first winning an election to the Senate in 1998. 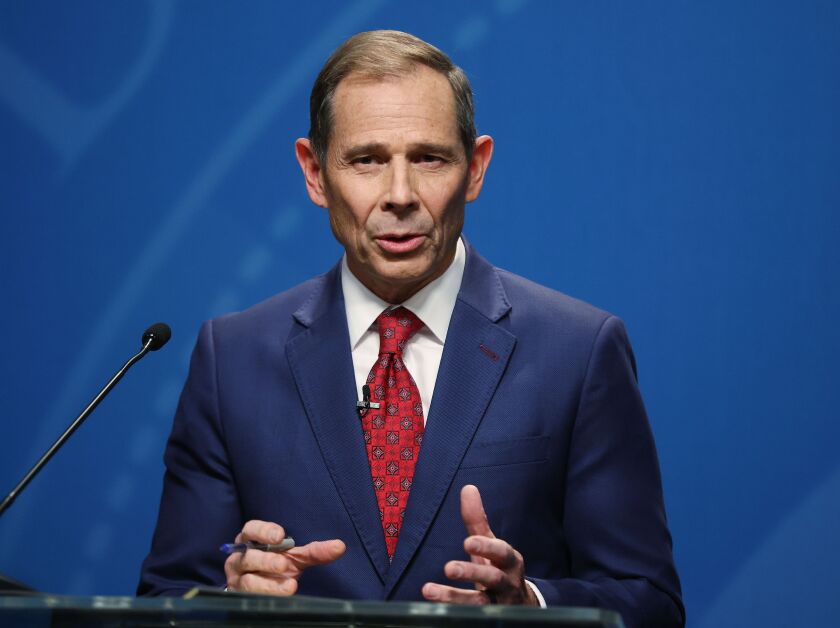 Rep. John Curtis, R-Utah, the former mayor of Provo, Utah, is vying to win his third full term to the US House of Representatives. Democratic candidate Glenn Wright is challenging him this year. Curtis first won a special election to congress in 2017. He is a former executive of a shooting range equipment manufacturing company. Curtis graduated from BYU with a degree in business management. He is a founder and chairman of the Conservative Climate Caucus, where he has sought to recruit House Republicans to tackle environmental issues with conservative perspectives. The group currently boasts over 90 Republican representatives in its ranks. 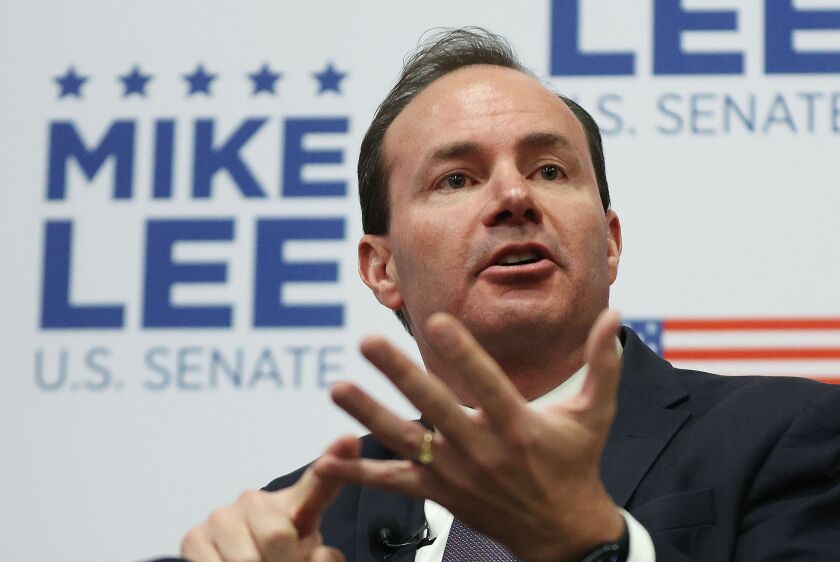 Sen. Mike Lee, R-Utah, speaks during a rally at the American Preparatory Academy in Draper on Thursday, Oct. 27, 2022.

Sen. Mike Lee is the senior senator from Utah and a former appellate litigator. He was first elected to the US Senate during the tea party wave of 2010. Lee graduated from BYU Law School before working as an appellate attorney, clerking for US Supreme Court Justice Samuel Alito, serving as an assistant US attorney in Salt Lake City and working as a general counsel to former Utah Gov. Jon Huntsman Jr. Lee’s father, Rex Lee, served as President Ronald Reagan’s solicitor general and as the president of Brigham Young University. He is the author of the book “Saving Nine: The Fight Against the Left’s Audacious Plan to Pack the Supreme Court and Destroy American Liberty.” He’s currently running against independent challenger Evan McMullin. 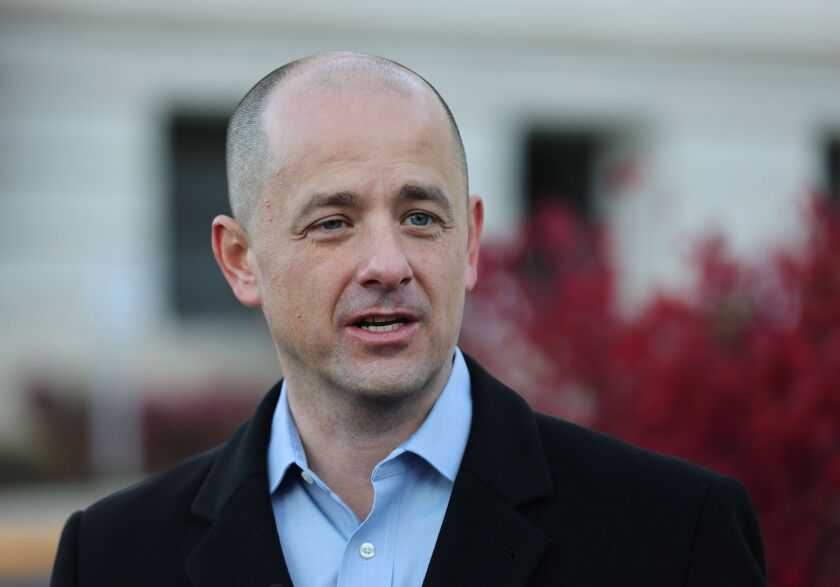 Evan McMullin talks with members of the media after dropping off his ballot at a drop box in Provo on Friday, Nov. 4, 2022. McMullin is running for US Senate against GOP Sen. Mike Lee.

Evan McMullin is challenging Lee for the US Senate. McMullin is running as an independent in Utah after his failed independent presidential campaign in 2016. Born in Provo and raised just outside Seattle, McMullin was recruited by the CIA while attending BYU. He spent more than 10 years as a CIA intelligence officer with multiple deployments as an undercover officer in the War on Terror. After his service, he graduated from Wharton School of Business at the University of Pennsylvania in 2011 before a stint at Goldman Sachs and serving as a senior adviser on national security issues for the House Committee on Foreign Affairs. He’s currently running against Republican incumbent Lee. 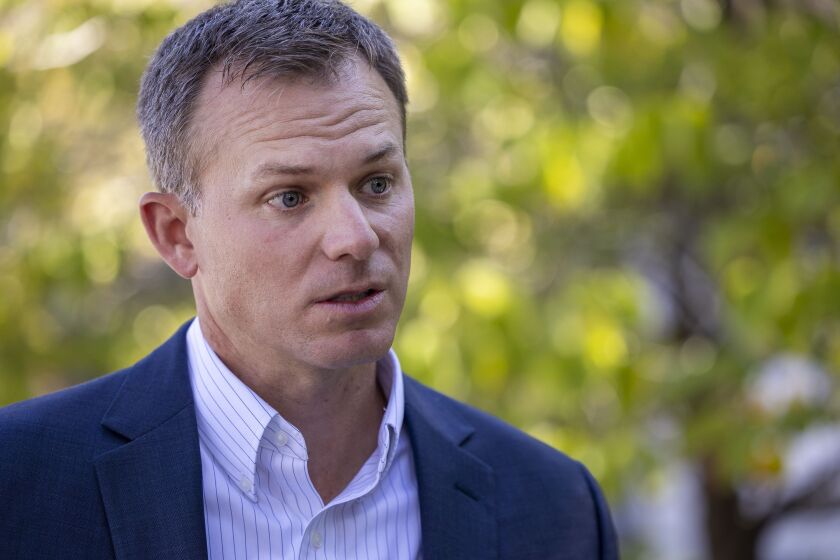 Rep. Blake Moore, R-Utah, who was hoping to welcome Rep. Liz Cheney, R-Wyo., to a fundraiser for his campaign in Salt Lake City on Monday, Oct. 4, 2021, talks during a quick interview after Cheney’s plane was apparently delayed, causing her to miss the event.

Rep. Blake Moore represents Utah’s 1st Congressional District after being first elected in 2020. Democrat Rick Jones is challenging him for the seat. He is seeking his second term in Congress after a brief career as a foreign service officer in the United States State Department and as a business consultant in Salt Lake City. Moore attended Utah State University on a football scholarship after winning the Wendy’s High School Heisman award in 1997 as a quarterback. Following USU, he earned a master’s degree from Northwestern University. Moore is running against Democrat Rick Jones. 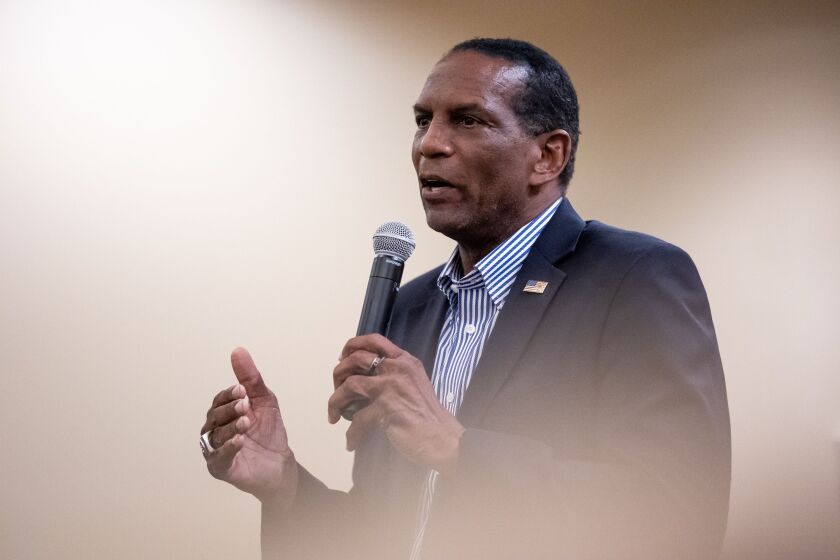 Rep. Burgess Owens is the congressman from Utah’s 4th Congressional District. He was a safety for the New York Jets throughout the 1970s, and won the Super Bowl in 1980 with the Oakland Raiders. He joined The Church of Jesus Christ of Latter-day Saints during his final season with the Raiders. Owens founded Second Chance 4 Youth in 2019, a nonprofit dedicated to helping troubled and incarcerated youth. He is also the author of the book “Liberalism or How to Turn Good Men into Whiners, Weenies and Wimps.” He’s currently running against Democratic challenger Darlene McDonald. 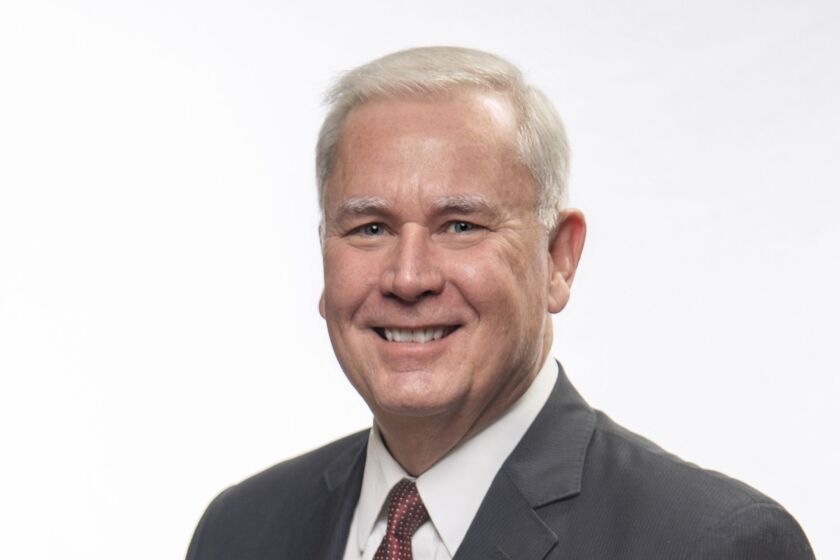 In this undated campaign photo is Mark Robertson, who is seeking election to Nevada’s 1st Congressional District seat in the Nov. 8, 2022, election.

Mark Robertson For US Congress Campaign via Associated Press

Mark Robertson is running to represent the newly redistricted, and newly competitive, 1st Congressional District in Nevada. His opponent is Dina Titus, a five-term Democratic incumbent, who says the Legislature’s redrawing of her district in 2020 is to blame for the race’s “toss-up” status. Robertson is a native of southern California but has lived in the Henderson area for nearly thirty years. Robertson served in the military, receiving the Bronze Star and Legion Merit for his service in Iraq, Afghanistan and Kuwait. Before retiring as a colonel in the US Army Reserves, Robertson served as a senior adviser in the Office of the Secretary of Defense. Robertson graduated from BYU with a degree in finance and the City University of Seattle with an MBA. 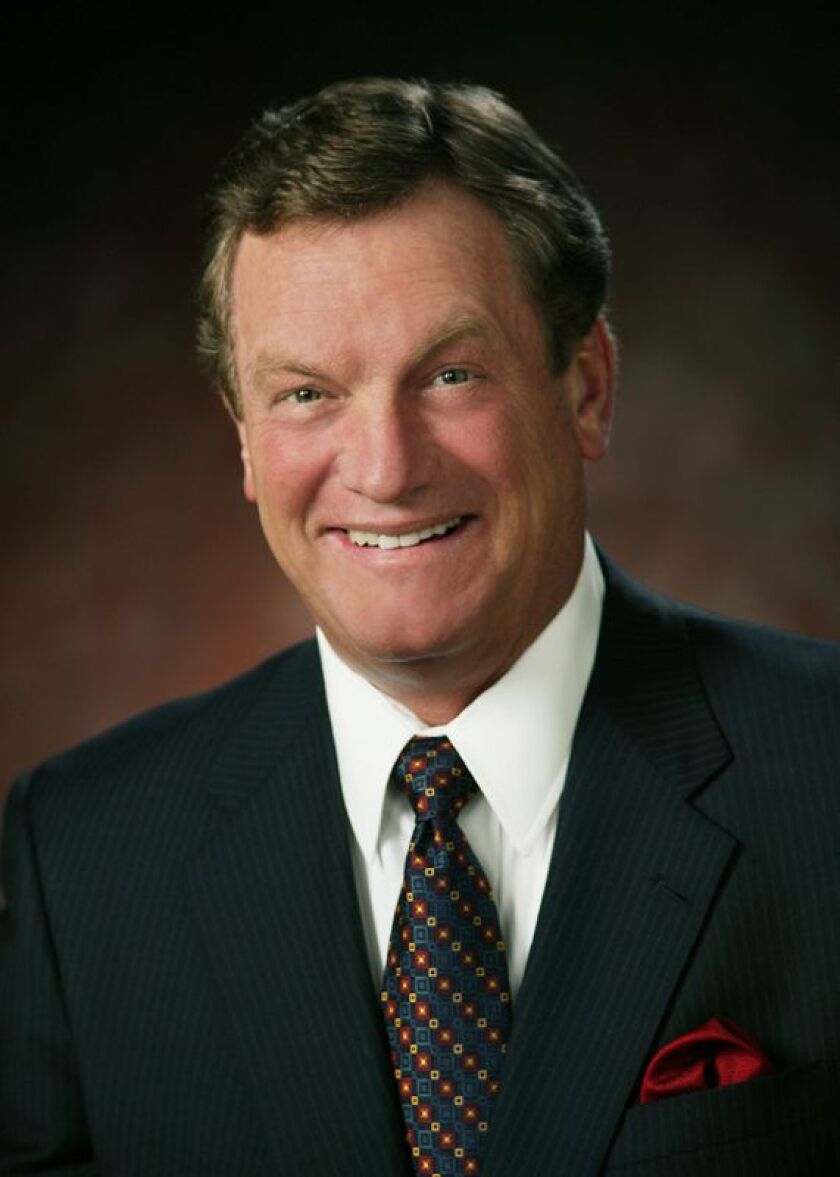 Mike Simpson has been Idaho’s 2nd District representative since 1999. Before serving in Congress, he held positions in the Idaho state Legislature. Simpson attended the University of Utah before going to dentistry school and joining his father and uncles’ dentistry practice. Simpson is the ranking member for the Subcommittee on Energy and Water Development, where he has long championed forest management and energy policies. He faces Democrat Wendy Norman in this year’s race. 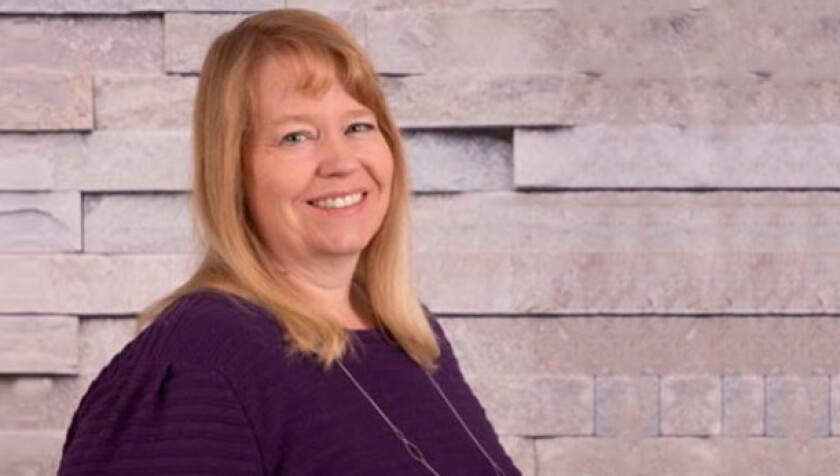 A native of Idaho Falls, Wendy Norman attended Ricks College, now Brigham Young University-Idaho, before transferring to Utah State University. She taught as a school teacher before earning a master’s degree in education from Idaho State University. Norman is the Democratic challenger to Simpson for the 1st Congressional District in Idaho. She told the press that she became a Democrat to run against Simpson after previously being a registered Republican. Norman also signed the “Latter-day Saints Across the United States Support Joe Biden for President” endorsement statement in 2020. 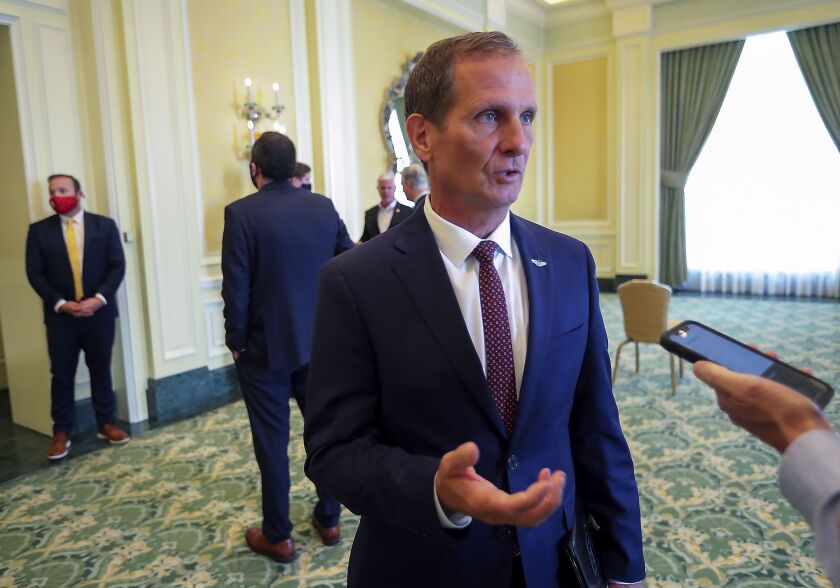 Rep. Chris Stewart, R-Utah, talks with a reporter for the Deseret News after hosting the 6th annual Stewart Security Summit at the Grand America Hotel in Salt Lake City on Tuesday, Oct. 6, 2020. US national security adviser Robert O’Brien delivered the keynote address at the summit.

Chris Stewart holds the congressional seat for Utah’s 2nd District. He is a second-generation Air Force pilot, and his mother, Sybil S. Stewart, was recognized as the Utah Mother of the Year in 1996. He served a Latter-day Saint mission in Texas before attending the University of Utah. Stewart is the author of 14 books, including co-writing Elizabeth Smart’s memoir “My Story” and “A Christmas Bell for Anya” with his wife, which was performed by the Mormon Tabernacle Choir. He is vying for a sixth term, running against Democrat Nick Mitchell, JayMac McFarland from the United Utah Party and Constitutionalist Cassie Easley.