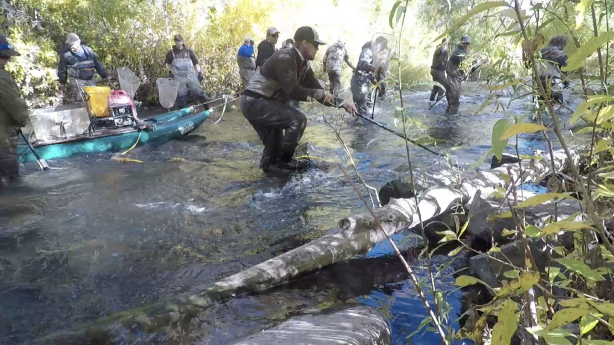 A group of biologists and volunteers are electrofishing fish on the Provo River Thursday. The fish were measured and weighed before returning to the river. (Stuart Johnson, KSL-TV)

PROVO – A group of wildlife biologists and volunteers from Utah descended into the Provo River with strange-looking fishing nets Thursday.

On the poles held by volunteers was a thick yellow line attached to a generator floating on a small pontoon boat nearby. The line ran all the way to the net so those wading through the water could essentially zap a fish, pick it up, and quickly drop it for sampling.

This was not a fry and the ones caught were fine. Experts say the electrical shock only temporarily immobilizes the fish, causing them to rise to the surface of the water so that they can be collected, measured, and weighed. After the information is gathered, the fish are thrown back into the river and swim away.

“With electricity, it’s a non-lethal way for us to sample fish populations,” said Mike Slater, sport fish project leader for the Utah Division of Wildlife Resources. “It numbs these fish for a few seconds. It allows all of our volunteers and guides to rush to catch them and then put them in some water where they can be resuscitated.”

The work done Thursday, dubbed “Electrofishing Surveys,” may seem strange, but it is actually important to the Utah Division of Wildlife Resources and groups that have invested in supporting fish habitats.

The Trout Unlimited Division and several private donors bought about 20 cubic feet per second for a section of the Lower Provo River at the mouth of Provo Canyon. According to Slater, the deal cost nearly $ 1 million over the next decade.

This share of the water rights allows the water to flow further downstream instead of going into irrigation or hydropower generation; Water that continues downstream is critical to fish and other wildlife habitats. Parts of the river suffer from periods of low water and sometimes almost dry out in the heat of summer, explained Slater.

It also helps those who love to catch fish. State wildlife authorities estimate that the Lower Provo River attracts approximately 7,000 anglers per mile annually. By buying water rights, they believe they can let the fish swim and help anglers catch fish all year round.

All of this leads back to Thursday.

Experts needed to know exactly how many fish there are in the lower Provo River, especially since they invest a lot in securing water rights.

So they shocked the fish and gathered information about them. The process helps experts gather “baseline information” to better understand the fish population and the general health of the population, Slater said. He is happy with what was discovered on Thursday.

“(I’m) really excited about what we just saw,” he said, standing a few feet from the river bank. “Lots of brown trout, lots of whitefish, lots of sculpins – lots of different kinds of fish hanging out here.”

They are all types of fish that experts expect to thrive over the next decade.

Said Slater, “I think they will continue to do this because of this water that we have been able to secure.”