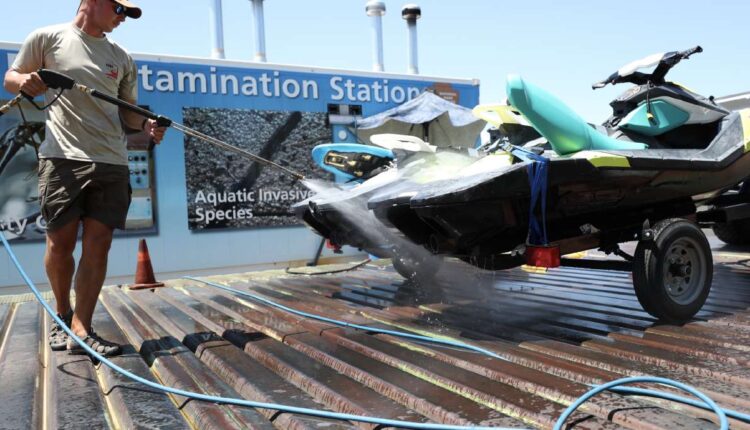 Why it may take longer to launch your boat at Bear Lake, Flaming Gorge this summer

A Utah Division of Wildlife Resources employee sprays down a watercraft for quagga mussels at a state inspection station on Sept. 9, 2020. The division said Monday it is dealing with staff shortages for inspections, which is why it is turning to Wyoming for help. (Utah Department of Natural Resources)

Utah Division of Wildlife Resources officials warn that anyone looking to launch watercraft into Flaming Gorge this summer will have to go through the Evanston Port of Entry on eastbound I-80 for mandatory invasive species inspections before they can launch their boats this summer. The same goes for people planning to launch their vessel on the east side of Bear Lake.

The inspections and decontaminations, which are required at Utah’s lakes and reservoirs, have typically been conducted northeast of Lake Point for the east side of Bear Lake and in Daggett County for entry into Flaming Gorge. That’s where experts inspect all watercraft for quagga mussels and other damaging invasive species and decontaminate any vessels that might carry the species into the water.

However, with a shortage of available seasonal workers, the Utah Division of Wildlife Resources likely won’t have enough people to staff all of its stations this summer. Sgt. Krystal Tucker, with the division’s aquatic invasive species unit, said Monday that Wyoming’s inspections are valid in Utah, which is why they are turning to them for help and directing boaters to go there first for the two bodies of water.

Utah inspects boats for quagga mussels, zebra mussels and any other invasive species because they are considered the primary transmitters of the species from one body of water to another. The species have the capability of costing millions of dollars in damages to boats and water infrastructure.

Lake Powell is currently the only body of water in Utah affected by quagga mussels.

But that is why all vessels, including kayaks, canoes, paddleboards and inflatable rafts, are inspected to prevent further spread to lakes and reservoirs in the state. Nonresidents are even required to take an education course and pay an additional boater fee before launching a boat in the state.

Failing to comply with any of the inspection rules can result in a citation. There were over 600 citations issued last year alone.

The state’s unemployment rate is currently estimated at 2%, though, according to the Utah Department of Waterforce Services. Mark Knold, the chief economist at the Department of Workforce Services, said last month that the low rate means “excess labor is virtually nonexistent” for some industries.

For state wildlife officials, they’ve found it difficult to find enough people to run the stations that look to prevent invasive species from entering the water.

Utah will still have inspection and decontamination stations at over sites around Utah this year. This includes the south and west sides of Bear Lake, such as Bear Lake Overlook, Bear Lake State Park Marina and Rendezvous Beach. Those are all located in Garden City or between it and Laketown.

Division officials added Monday that there could be service at boat ramps on the east side of the lake and at Sage Creek Junction later in the summer, which would reduce the congestion and travel time for boaters.

The agency, in March, also warned of longer inspection lines at Lake Powell this year but for a completely different reason. Low water levels have all but one ramp closed, so boaters have to enter at the same ramp for inspections.

“(Boaters) are going to need to have patience this year,” Lt. Bruce Johnson, of the Utah Division of Wildlife Resources aquatic invasive species team, said at the time. “It’s more important than ever to have patience.”