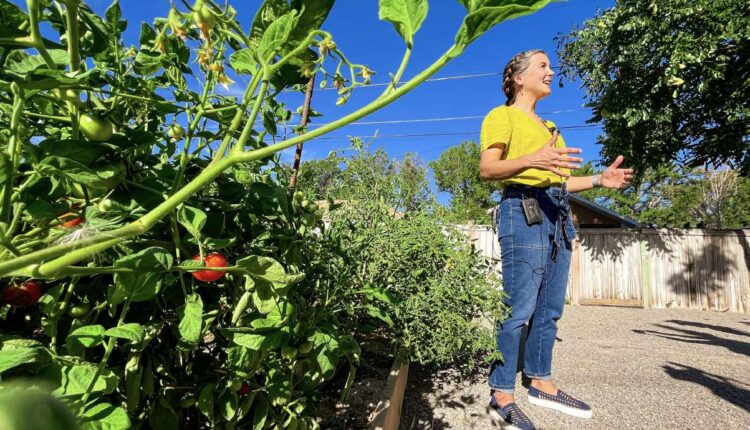 Salt Lake City Mayor Erin Mendenhall speaks to members of the media at the Harrison Community Garden in Salt Lake City Thursday. The garden, the eighth in the city, opened this year. (Carter Williams, KSL.com)

SALT LAKE CITY — Nichole Farley didn’t know anyone in Salt Lake City when she moved to Utah’s capital in the fall of 2020.

That started to change with a stroll through Sugar House Park one day. Farley came across the community garden and tried to sign up for a space, only to find a long waitlist. That’s also when she learned about an effort to turn an empty space along 700 East into a community garden, known today as the Harrison Community Garden.

“They needed volunteers to get behind the garden,” she recalls. “I had my hand in the air, ready to organize and get things started. … It was my first sense of community within Salt Lake City.”

Growing Harrison Community Garden wasn’t easy, though. The process began well before Farley moved to the city; however, it was considered risky enough that a board that offers insight on capital improvement spending in the city recommended against funding the project, said Salt Lake City Councilman Darin Mano.

Yet as Farley was pushing out for the project, Mano kept hearing support for the garden as he knocked on doors ahead of his 2021 reelection.

“Almost without fail, when I knocked on a door within a few blocks from here, they asked, ‘Are you going to fund that community garden?'” he said. “It’s not often we, as a City Council, can pull a project off a cutting room floor. … But there was so much energy.”

It was clear that, risk or not, the people had spoken.

The fruits of that labor are now ripe for the picking, as city officials celebrated the opening of the Harrison Community Garden with a ceremony on Thursday. The garden, located just south of Liberty Park on 700 East, actually opened in the spring but the fruits and vegetables from the inaugural planting are now about ready to harvest.

It’s the eighth community garden in the city and more are on the way.

This garden, Mano adds, has boxes located around the perimeter of the garden that allows people to collect picked produce for free, even if they didn’t plan anything.

“It’s not just the gardeners who are benefiting from this, but the community as a whole,” he said, standing in front of a plant starting to bear fresh tomatoes. “I know that I will be visiting often and I’m excited to see my neighbors and the rest of the community here.”

Putting a garden together

A house used to rest on the land where the garden stands today. It was demolished when the Utah Department of Transportation acquired and expanded 700 East, according to Salt Lake City Mayor Erin Mendenhall.

Brett Markum, who lives next door to the plot of land, enjoyed the space when he and his wife first moved into the home 25 years ago. It offered their home a decent-sized buffer from the busy six-lane roadway. Then, as the years went on, his mind shifted. It wasn’t really a worthwhile space, other than when people would show up on Pioneer Day to watch the Liberty Park fireworks from the park strip.

He tried to acquire the land to expand his fence line, but the conversations with the state agency that owned it went nowhere. Mendenhall, then a councilwoman, proposed that it could be turned into a community garden. The nonprofit group Wasatch Community Gardens eventually got involved lobbying for the project.

Then, in 2021, as Farley and others pushed for the garden, the project received funds from the city’s Capital Improvement Program to turn the idea into a reality.

“This is the best use of this land that I can imagine,” Mendenhall said. “Let this beautiful space be a callout to communities across Salt Lake City who might have a similar piece of land in their neighborhoods, and want more garden space and community-building space.”

The push for more gardens

There is a reason that city leaders are interested in community gardens. They allow neighbors to mingle as they grow food together, and they help urban residents feel connected to the food they consume.

“If you really think of 26 tons of food for 530 families, it’s not just going to those households. It’s going to their neighbors, it’s going to their community, it’s being dropped on the boxes when they walk when there’s excess produce to collect, ” she said. “A community garden feeds just that, a community.”

But city leaders also see community gardens as a more productive use for spaces that aren’t big enough for parks at a time when the city is becoming denser because of its record growth, though it requires neighborhood support backed by Wasatch Community Gardens.

Not only does it fill in space, gardens help bring back agricultural uses at a time when the Wasatch Front’s growth squeezes out old farming land.

“We should be actively looking with our community members for more shared spaces,” Mendenhall said. “Community gardens can absolutely be a piece of our future, but it’s got to be driven by a neighborhood. … If you want to see more of this in your neighborhood, help us identify those pieces of land and we’ll help you in the process.”